How To Survive A Zombie Apocalypse According To A Professor 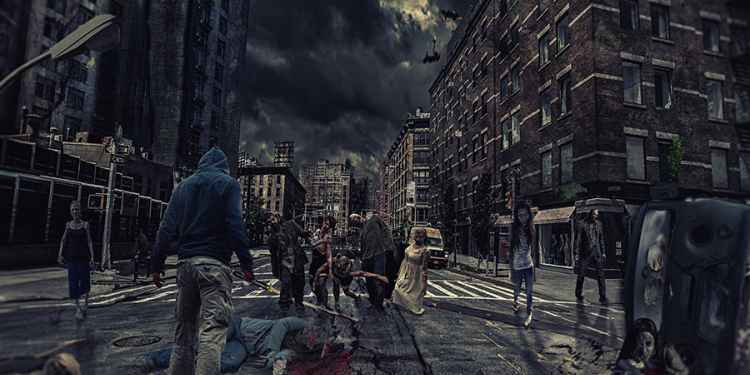 Photo: pixabay.com
One in four Brits has a plan in place – to survive a zombie apocalypse, it has emerged.
Researchers who carried out a detailed study also found around one in six have considered putting together a SURVIVAL KIT.
Among the most common items we would rush to shove into a bag before escaping an invasion of the walking dead are food, water, weapons - and condoms.
A first aid kit and tampons also made the list of must-have items along with water bottles, torches and matches.
The bad news is, despite being in the advanced stages of preparation, close to one in ten believe they may only be able to live for a week in a post-apocalyptic world.
Most believe it will all kick off in New York City, with London second on the list.
The research was commissioned by streaming service NOW TV to celebrate the return of The Walking Dead, with Season 9 available to watch now with a NOW TV Entertainment Pass.
NOW TV also partnered with zombie expert Professor Lewis Dartnell, who put together a list of tips on how to survive an attack - and even created escape routes for residents of London and Manchester.
According to Prof. Dartnell's guide your first focus should be getting out of populated areas, not head to the loft which was the first choice of one in three who took part in the research.
Dartnell said: “Not only will they become the densest concentrations of zombies, but modern urbanised areas simply won't be habitable once the technological bubble that supports them disappears: no electricity, running water or gas.
“Very large numbers of people would succumb almost immediately in the packed cities. The 'average' survival time would be a matter of days.
"Leave your house behind and head for isolation and make your first destination a camping shop for warm clothing, waterproofs and some sturdy hiking boots.
"Rely on a car GPS device instead of smart phone maps – you'll soon be losing phone signal when power grids go down."
Dartnell, who is a professor of science communication at the University of Westminster, and wrote The Knowledge: How to Rebuild our World from Scratch, added: "Chapstick, Vaseline and hairspray are all great for helping get a fire started in difficult conditions.
"With regard to weapons I suggest relying on your own ingenuity and resourcefulness, fashioning what you need from metal pipes or nails.”
The study of 2,000 Brits also found the average adult believes they could evade a zombie bite for just over nine weeks, 13 hours and 26 minutes.
Even NOW TV's The Walking Dead could double up as a survival tool, as 15 per cent said they would scour Zombie TV shows for tips on how to stay alive.

How To Survive A Zombie Apocalypse By Prof. Dartnell 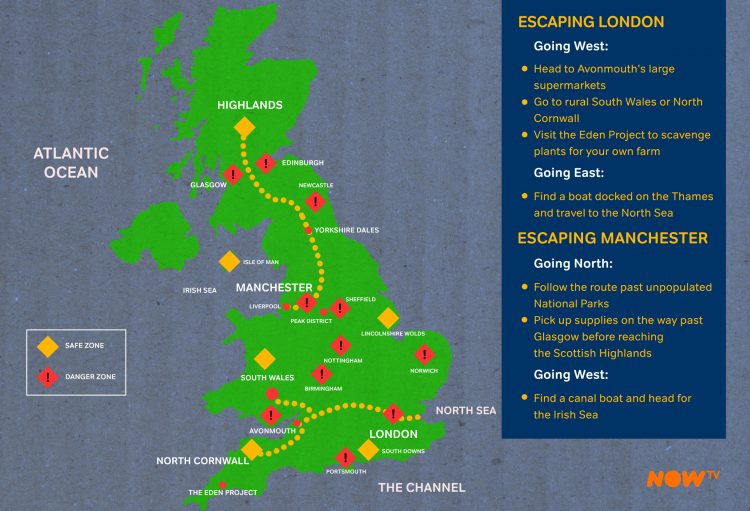 Make your first destination a camping shop for warm clothing, waterproofs and hiking boots. You'll be spending a lot of time outdoors, and when you're running away you don't want to slip and break an ankle.
Buy iodine tablets to purify water once the taps run dry. There's no point in surviving a zombie attack if you're just going to die from a waterborne disease.
Rely on a car GPS device instead of smart phone maps to find minor roads. You'll lose phone signal when power grids go down.

A plastic bottle must become your new best friend. If it's summer, disinfecting drinking water by simply leaving it in the sun for a day can become a regular part of your routine (the UV rays kill any germs: a handy trick known as solar disinfection)
An unraveled tampon makes an ideal dressing to stop a wound bleeding, and it's perfect kindling for starting a fire.
A condom can hold over a gallon of water. Don't let it rupture in your bag.
Chapstick, Vaseline and hairspray - all great for helping get a fire started in difficult conditions.
Once the refined fuels have disappeared, cars can actually be run using wood as fuel. The process is called ‘gasification' and was common in WWII.

Leave your house behind and head for isolation.
Get out of the city. Not only will they have the highest concentrations of roamers, but urban areas simply won't be habitable once technology disappears.
Head into the countryside and find traditional buildings with fireplaces and wells. A seaside region near a large wood is your ideal new home, offering you access to a wide range of natural resources.
Ideally, a secluded spot with high walls or fences will help keep the swarms of walkers out when you're settling down more permanently.
Stick together - you'll never survive the apocalypse as a lone wolf. There's safety in numbers, but be careful who you pick as friends.
Send scouting parties to find other pockets of survivors, or rig-up a radio transmitter.

How & What To Forage

In the early stages of a zombie attack you can scavenge food from abandoned supermarkets or distribution centres. Prioritise canned food that will keep for years.
If you forget your tin opener grind the top of the can in flat circles pushing down onto a paving slab. You'll quickly wear away the thin metal lip and get that lid off.
The power grid is out: but don't worry, you can stay connected. Scavenge a mobile generator from roadworks.
When the diesel runs out, you will need renewables: scavenge solar panels or small wind turbines.
The best kind of rechargeable battery is a deep-cycle lead acid battery. Scavenge these from things like golf buggies. Surprisingly, a golf course is one of the most practical places to head for after an apocalypse.

How To Prevent Sickness

Always dig your DIY loos at least 15 meters away from your water source and downhill, for obvious reasons.
Washing your hands. Soap can be made from scratch by soaking water through the ashes of burned seaweed to extract soda, and then reacting this with slaked lime (made from roasted chalk or limestone) to make caustic soda. Boil this with lard, or any other animal fat or plant oil, to make soap
If you injure yourself, attend to the wound immediately. You can disinfect with alcohol and then close the wound with superglue.
Stream season 9 of The Walking Dead now on NOW TV with a contract-free Entertainment Pass. The show returns Mondays at 9pm on FOX

'Perdition' A Zombie Short With An UrbEx Twist