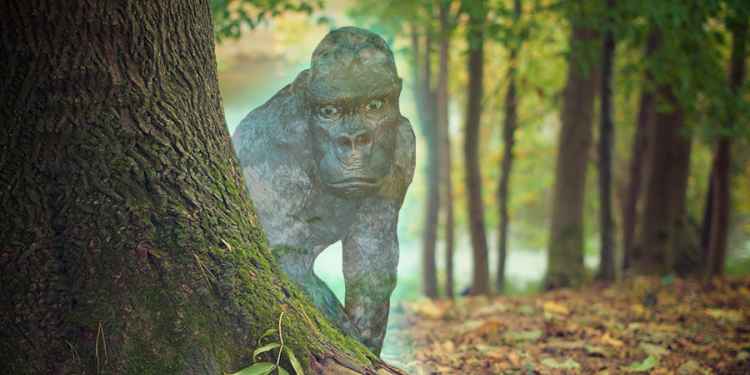 Photo: pixabay.com
There's no denying that Bigfoot is an elusive creature and despite the fact that enthusiasts have been hunting the beast for decades, there's still no real proof of its existence. Remind you of anything else?
Just like ghosts, sightings of Bigfoot are few and far between and tend to be anecdotal. The only evidence that exists of Bigfoot is unsubstantiated and poor quality video footage that proves nothing and photographs that are hard to make out.
Scientists have widely dismissed Bigfoot as a mix of folklore, misidentification and hoaxes, but this is also true of ghosts. However, despite the the lack of any evidence to back up its existence, many people still believe that Bigfoot exists - and the situation is exactly the same for ghosts, which makes us wonder if Bigfoot could in fact be a ghost.
If Sasquatch is merely a ghost that's been haunting America's Pacific Northwest since the 1840s, then what is he a ghost of? With reports of him being at tall as nine feet, he's clearly not the spirit of a human. It could be that Bigfoot was an extinct genus of ape called a gigantopithecus. They were last known to have existed one hundred thousand years ago, but could one still roam the Earth in spirit form?
The other option is that Bigfoot is the ghost of a neanderthal man. After all, it's a commonly asked question in the paranormal world: Why don't we ever see the ghosts of cavemen, neanderthals and other early hominids? Well, perhaps we do but we're misidentifying them.
Most ghost stories that people share are of spirits that take human-form, but as animals are so woven into are lives and human history, it's not unheard of to see the ghosts of dogs, cats and other animals roaming around in haunted houses - so why not a primate? The ghosts of animals including horses are often seen on the sites of battlefields. Carew Castle in Wales is said to be haunted by the laughing ghost of a murdered pet monkey, and even the Tower Of London is haunted by the ghost of a bear.
Tales of phantom horses are quite common, there's even a cliff in Texas that was the site of a stampede, which resulted in hundreds of horses falling to their death. Today it's said you can still hear the sound of horses running towards their death.
But some in the paranormal field don't think this is possible and think that hominids need to cross some kind of threshold of consciousness, intelligence or emotional development in order for their spirits or residual energies to remain in a location and haunt it as a ghost.
Just like hauntings, until definitive evidence of the existence of Bigfoot is captured, we will never truly know what causes the sightings of the elusive creature.
Tags:
paranormalunexplainedcreaturesghosts