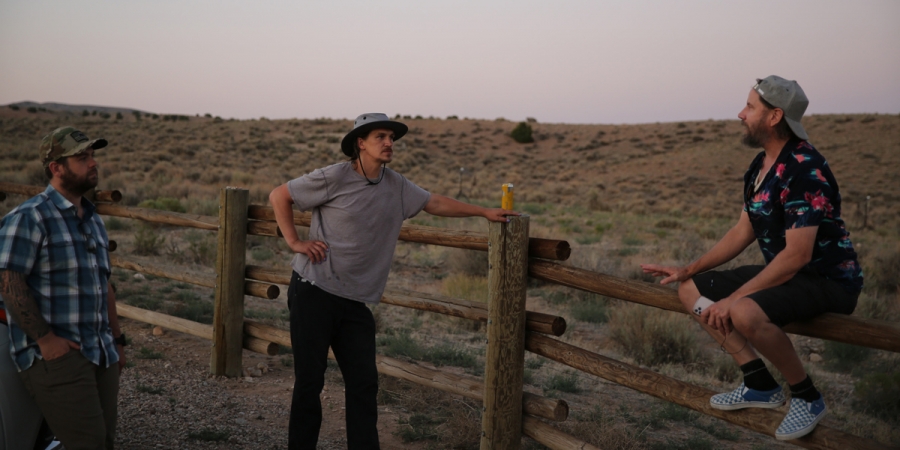 Photo: © Discovery+
Jack Osbourne teams up with actors Jason Mewes and Jamie Kennedy for 'Jack Osbourne's Night Of Terror: UFOs', an otherworldly exploration in a new two-hour special streaming on Discovery+ from September 3.
Jack is taking viewers to the edge of the unknown in the new, two-hour special, 'Jack Osbourne's Night Of Terror: UFOs', launching Saturday, September 3 on Discovery+.
In his latest quest, he teams up with his actor friends Jason Mewes star of 'Clerks' and "Jay & Silent Bob Strike Back', and Jamie Kennedy of 'Scream' and 'Son Of The Mask' fame. Together they will venture out on an out-of-this-world journey for answers behind the strange activity surrounding Utah's Uinta Basin. This infamous basin and its vast desert landscape are shrouded in supernatural mystery, and sightings of otherworldly visitors date back centuries.
Home to the infamous paranormal hotspot Skinwalker Ranch, the Uinta Basin is a highly active supernatural site. Reports of UFO sightings and alien abductions have long defined this area. In recent years, strange creatures and shapeshifters have appeared to residents, unexplainable lights fly across the skies and rumors of government tests and installations are widely circulated. Gathering intel from witnesses and experts, including UFO expert Ben Hansen, Jack, Jason and Jamie embark on an unflinching investigation to figure out if these phenomena are connected and why the strange activity is so concentrated in this area.
"I've been obsessed with the concept of whether or not we're alone since I was a kid staring up at the stars," said Jack. "The Uinta Basin has fascinated me for years – it's a mecca for alien and supernatural activity. People are drawn here for specific things but when you come here looking for it, you often find something you're not looking for. I've never been to any place like this. It's its own realm."
Armed with state-of-the-art technology and specialty equipment, the trio venture on a multi-part investigation throughout the rugged and isolated landscape. Witnessing unexplained aerial phenomena in the skies, mysterious lights and perplexing shadow figures, they're convinced the area is a supernatural melting pot. But when Jack captures a particularly unusual creature on camera, it leaves them with more confounding questions deepening the mystery of a realm beyond.
Follow #NightOfTerror, @DiscoveryPlus and @TravelChannel and on Facebook, Twitter, Instagram and TikTok for exclusive content and the latest updates. Follow Jack Osbourne on Twitter and Instagram.
Tags:
ufosjack osbournediscoveryplustopical