Kids Are Over Unicorns, Dragons & Fairies By Age Six 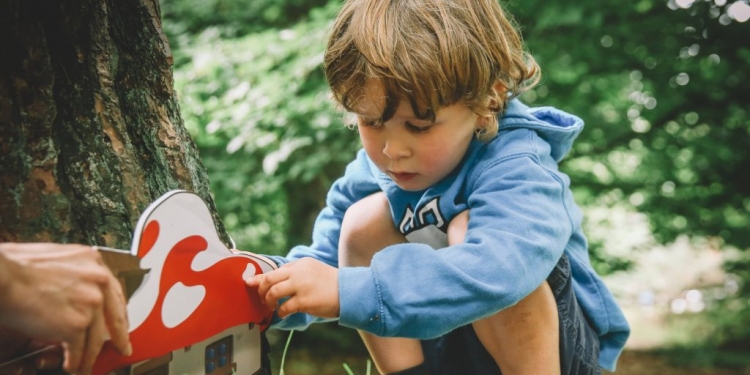 Photo: swnsdigital.com
Modern kids stop believing in magic aged six, two years earlier than their parent's generation, according to research.
Researchers found youngsters start doubting the existence of magic and creatures like unicorns, fairies and elves at this age.
While mums and dads, who were eight years old when they felt the same way, think children are losing their sense of the fantastic too early nowadays.
Four in ten parents blame social media and technology for the decline and over a third think too much time at work has had a knock-on effect because they get less quality time together as a family.
The research of 1,000 parents with children aged two to ten was commissioned to mark the launch of 'Smurfs: The Lost Village' which is available on Blu-ray and DVD from 14th August.
Chantelle Hazelden, parenting expert and founder of Mama Mummy Mum, said: “Imagination is a powerful tool and it is something that is in use constantly, whether you are a child or an adult.
"To be imaginative is to be innovative - as parents we should encourage our children to use their imaginations at all times - as it has benefits for both parents and kids alike."
A fifth of mums and dads said they believed in magic up to the age of ten, compared to just two per cent of kids today.
Amid this, one in ten think kids are losing their sense of the weird and wonderful earlier now because the world is 'more depressing' than it was during their own childhoods.
And around two thirds fear children are growing up too early.
Thirty-four per cent of parents admit they are 'very worried' about children losing their sense of magic and innocence.
But in comparison just a quarter are concerned about their children not making friends at school.
Four in ten mums and dads would like kids to keep their sense of magic for longer because they believe it helps maintain their innocence.
And seven per cent think families spend too much time indoors rather than playing "magical" games outdoors.
Perhaps as a result, over a third of time-pressed parents said they rely on technology to keep a sense magic alive in their little ones.
And almost a fifth said they don't know how to play "magical" games with their children.
The research also found one in six families play magic and fantasy games just once a month or less.
Seventy per cent of parents blame the lack of time spent playing with their children on after work commitments and household chores.
Despite this, half believe magical play helps them bond with their kids, 41 per cent think it helps children make friends with other kids and 31 per cent believe it encourages outdoor play.
And 66 per cent of parents think having a belief in the extraordinary helps children develop their ability to be creative.
Over a third said playing with their kids helps them shake off the stresses of being an adult and 40 per cent admit it helps restore a sense of magic which has faded as they’ve grown-up.
Chantelle Hazelden added: “This summer, I urge families to get outdoors and enjoy the Smurfs: The Lost Village augmented reality experience - the perfect opportunity to try something fun and keep magical, imaginative play alive.”
Smurfs: The Lost Village is available on Blu-ray and DVD from 14th August.
And The Smurfs: The Lost Village Official augmented reality channel, which helps children experience the magic of The Smurfs in their garden and in parks, is also available to download now on the Aurasma app.
For more information visit: https://www.facebook.com/SmurfsMovies/
Tags:
unexplainedcreatures