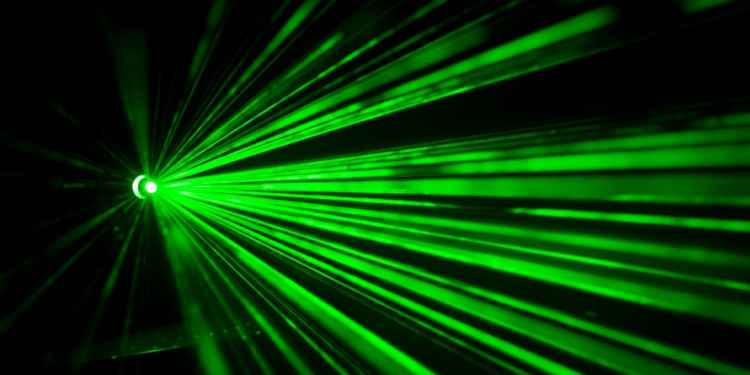 Photo: pixabay.com
Many paranormal investigators believe that ghosts and the electromagnetic spectrum are intrinsically linked, and since laser light is part of the EM spectrum, they make for an interesting area of research.
It's not uncommon to see investigators using a device called an EM pump during a vigil. The idea behind these gadgets are literally to pump energy out into the environment around it in the hopes that spirits can draw on that energy and use it to manifest or communicate.
The obvious fact that is often overlooked is that you can pump electromagnetic energy into your surroundings using just about anything, from a flashlight to a fan heater, in fact even the human body gives out electromagnetic energy in the form of heat.
Another source of EM energy - similar to a flashlight - is a laser. Just by projecting laser light at a haunted location is a good starting point if you subscribe to the theory that spirits can feed off of electromagnetic energy, but the experiment can be taken a step further.
Light, including laser light, travels in waves of varying frequencies in much the same way as radio waves, which are also part of the same spectrum. Of course radio waves are capable of transmitting data - everything from wifi and mobile phone data, through to FM radio broadcasts in the form of music and speech.
The radio wave portion of the electromagnetic spectrum is the ideal frequency range for sending audio because the energy kicked out by a radio transmitter travels so far, but just about any form of EM energy can transmit data, including laser light. In fact before Bluetooth took over the world, wireless headphones that used an invisible infrared light source to transmit the music were common. They worked in much the same way as your television remote control, which sends invisible light signals that your TV can decode.
A visible laser, like the common red and green laser pens that can be bought commercially, can be modified to send an audio signal to a light sensitive receiver. This means that audio can be wirelessly sent across a room, meanwhile pumping EM energy into the environment. This is where it gets really interesting for paranormal investigators.

As a beam of audio-transmitting laser light passes through the air, paranormal researchers theorise that spirits may be able to manipulate or interfere with the light's waveform in order to change the sound being transmitted or even add a sound of their own into the stream, like a voice.
This allows an investigator to call out to any spirits that might be present and encourage them to respond. The investigator can then monitor received audio being carried by the laser in realtime, which could include the spirit's responses - an example of electronic voice phenomenon (EVP).
The principle is basically the same as the idea behind a spirit box, a ghost hunting gadget that rapidly scans through another part of the electromagnetic spectrum - AM and FM radio frequencies. It's believed that spirits can manipulate the static and white noise in these frequency ranges to form words and sentences.
If this is true, then in theory it should be much easier for a spirit to manipulate a laser beam. The light is visible as it passes through the air, so if a spirit can see the environment around it, then it will be able to see where it can interact with the laser, whereas radio waves are invisible, presumably even to ghosts.
Secondly, the laser transmission system relies on line of sight, it can't pick up signals from outside of the building, or even the room. This eliminates the possibility that external broadcasts could be interfering and giving false positive results.
Investigators have experimented with transmitting trigger sounds through laser beams, this means that not only does the trigger sound play aloud in the room, but it also permeates the space in the form of laser light. Trigger sounds could be anything from the sound of a battle when investigating a former battlefield, or the sound of prison guards jangling their keys in a former jail. These triggers are another way to encourage spirits to respond.
You could also try the exact opposite. There's no reason why the experiment can't be left in an empty room to run for an extended period. The audio sent by the laser could be monitored from a remote location, or recorded and reviewed later.
To make this experiment even more robust, the laser could be enclosed in a light-proof pipe. This would effectively make it a closed system, which would not be susceptible to interference from other sources of laser light or reflection or refraction effects that are not accounted for. Of course, we'd need to assume that a ghost can penetrate the pipe in the same way they are said to be able to pass through walls and doors.
If you can't afford the kit required to try this experiment or don't have the expertise to modify lasers, then there is a much easier and much cheaper way you can try this. As we've said, laser light is part of the electromagnetic spectrum, the same as radio waves. So, why not use radios?
A cheap pair of walkie talkies placed at opposite sides of a room basically do the same thing as the laser. One walkie talkie transmits audio and pumps EM out into the environment, while the walkie talkie at the other side of the room receives that signal.
Again, this works like a realtime spirit box and in theory should make it easier for spirit voices to come through in the transmission than a traditional spirit box. It also decreases the likelihood of interference as walkie talkies are locked to one frequency and due to their limited power, distant transmissions wouldn't carry far enough to interfere. In comparison a spirit box scans through a wide range of frequencies and can receive bursts of radio broadcasts from miles away.
Although the method of capturing laser EVPs is relatively cheap and easy, the reason this method of instrumental transcommunication (ITC) isn't commonplace is probably due to the fact that it is less likely to give false results due to interference and therefore is less entertaining when used on ghost hunting television shows and paranormal YouTube channels, which for the most part shape the investigation trends in the paranormal world.
Tags:
paranormalghost hunting