15 Years On: My First Underground Trip

Fifteen years ago today I ventured underground for the first time ever into a Second World War bunker and from that moment on, I became hooked on underground exploration.

I had been aware of the secret bunkers underneath the rural town of Corsham and the surrounding area in Wiltshire for a few years before this, in fact it all started when I was 13 when a friend and I went to a lecture about UFOs. There were a few local speakers at the event, one of which was a guy named Matthew Williams.
His talk was about a secret government facility in Corsham and how it was the home of the secretive agency which deals with reports of flying saucers from across the UK. Matthew showed us photographs of RAF Rudloe Manor in Corsham and told us about a huge underground city.
Nine years later in 2002, me and some friends jumped in the car and headed to Wiltshire, armed with a copy of the book 'Secret Underground Cities' by a local author, Nick McCamley. I'd exchanged a few emails with Nick and he'd told me where some of the entrances to the underground facility were, so we were on a mission to find them.
It was a sunny, spring Saturday as I drove the four of us to Wiltshire, although most of the bunkers in the area are under Corsham, we were heading to the near-by, small village of Monkton Farleigh which was also home to a big underground secret.
As a I parked up on a country lane, I had no real understanding of the scale of what I was about to uncover. We walked along the small lane which was formerly an access road built by the War Department to serve to the bunker via three of its entrances. The first of these entrances that we came across was a rundown shed which was once the District 19 surface loading building. 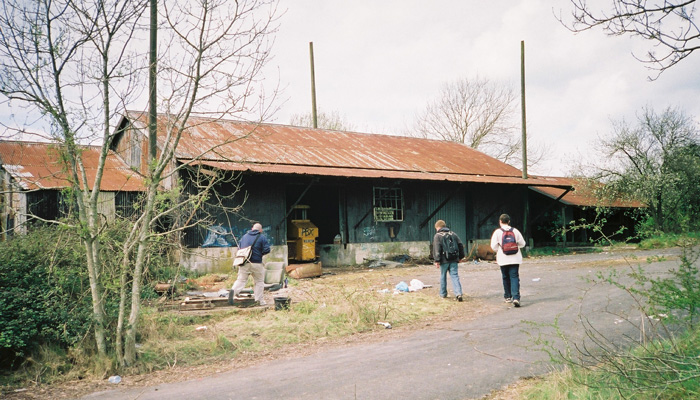 Looking at this building you'd have never guessed what was inside, it didn't look out of place in the English countryside and should it have ever gotten to a point where German places were flying overhead during the war, it would have looked just as incognito from the air.
Inside the building it was empty, uncared for, but in one corner there was an imposing concrete archway which lead down to the bunker below, but we wouldn't be descending the "slope shaft" here as the top of the entrance was securely bricked up.
We continued along the access road in the sunshine until we reached an almost identical barn, another loading building, this one served an adjoining underground area, this was the District 20 loading building. Although I'd been tipped off by Nick that the bunker was accessible here, I was still surprised to find the slope shaft hadn't been bricked up and was open. 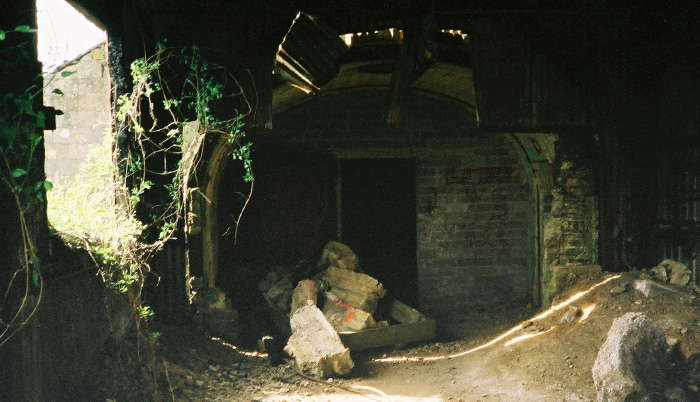 Slightly caught off guard by the open doorway, we weren't fully prepared to explore but excitement got the better of us and we carefully took the 135 steps down into the darkness 30 meters below, our path lit by a tiny pocket torch that was unable to light much more than a few steps in front of us, let alone the bottom of the staircase.
Eventually we reached the bottom of the steps, the only source of light other than the torch was the tiny dot that was the doorway we'd come through at the top of the slope shaft. We found ourselves stood in a huge underground bunker which was used as an ammunition depot during the war. It had since fallen into disrepair and had been vandalised, graffitied on a wall in front of us was a welcome, "f**k the law." 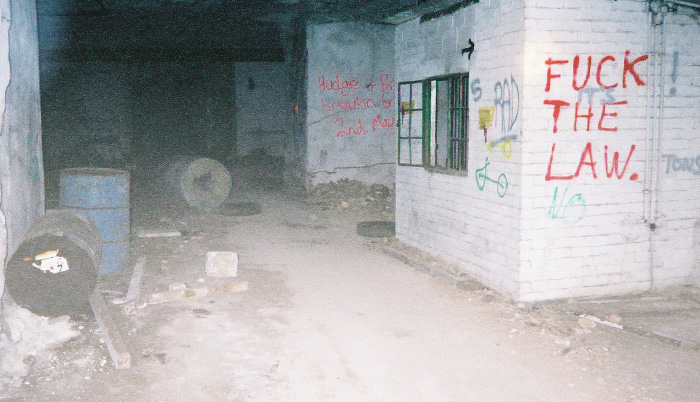 Monkton Farleigh Mine was part of a huge network of underground stone quarries that were converted into ammunitions depots as part of the war effort. The bunker in Monkton Farleigh was a sub-depot of CAD Corsham (Central Ammunitions Depot, Corsham).
The ammunition depot in Monkton Farleigh comprised of storage districts 12 through to 20, all of which were connected underground. The other districts were spread across other CAD bunkers in nearby parts of North Wiltshire, including under Corsham and the infamous RAF Rudloe Manor, where many parts of the bunker are still used today.
In fact, part of Monkton Farleigh Mine is also in use today by a storage company called Re:store, however back in 2002 they were known as Wansdyke Security. They had converted Districts 12 to 18 in to the largest and most secure underground vault complex in the United Kingdom. They have sealed their part of the quarry off from Districts 19 and 20, the part of the underground complex we'd found ourselves in. Wansdyke accessed their underground area from a building at the other end of the access road.
While we were stood in a dark, damp WWII-era bunker, behind Wansdyke's perimeter wall was a well maintained, well lit and air conditioned labyrinth of storage chambers where their clients could store paper records and digital data. 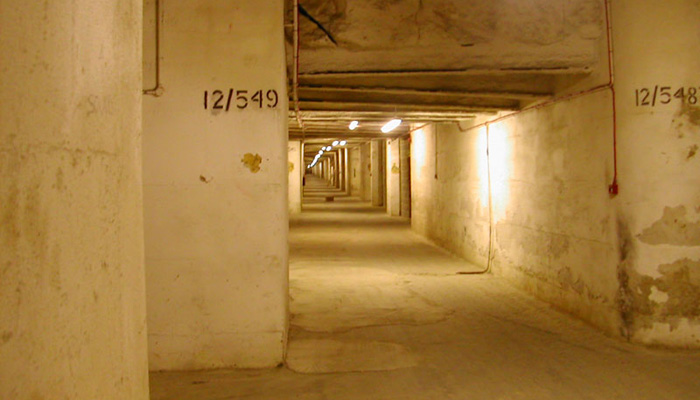 As we stood in the darkness, we were overwhelmed by the apparent size of the bunker branching out from pitch black tunnels in front of us. It was clear that we weren't going to be able to explore the bunker with a single, dying torch so we reluctantly climbed the steps back to the surface. As we climbed the slope shaft, the air steadily became warmer and more humid as we left the cool underground air behind us.
We spent the next few months exploring Monkton Farleigh Mine, obviously equipped with more and better torches, overalls and hard hats. It was an amazing summer and we never tired of wandering around the dark network of tunnels beneath the village.
We probably went about once a week at the height of our exploration of the mine and often spent two or three hours underground. We explored every corner of the bunker and took hundreds of photos on the way around. 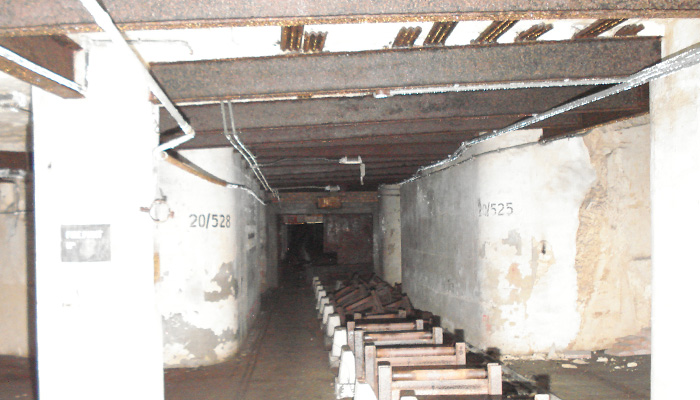 "I can't believe we have found Monkton Farleigh, it's the coolest place on Earth! I wish someone would buy it and restore it... but then where would we go on our days off?"
Extract from a 2002 blog post of mine
We were soon forced to answer the question of what we'd do with our days off without having Monkton Farleigh to explore. Later that summer in July, we visited the mine and found five palettes of bricks stacked up outside both District 19 and 20's slope shafts. We knew that this meant it would be our last visit to the mine, so we made the most of our final walk around the dark storage bays and along the tunnels with their rusting conveyor belts. 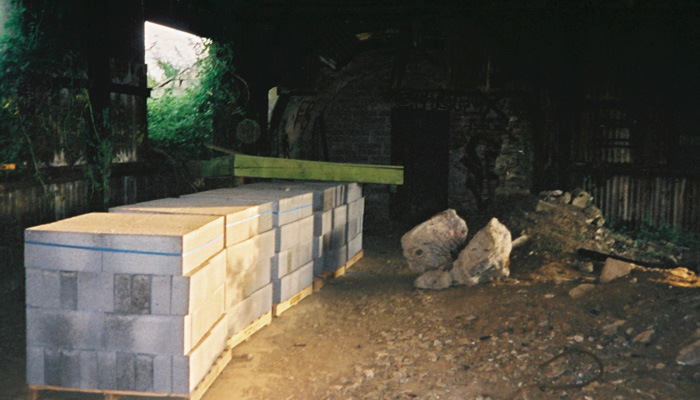 Sure enough, the next time we visited the entrance to District 20 had been walled up and a "private property" sign had been painted on the bricks. Of course we knew the mine was private property, the whole bunker was owned by the security firm, Wansdyke but up until this time they hadn't been using Districts 19 and 20 for storage but it seemed business was good and they were planning an expansion. 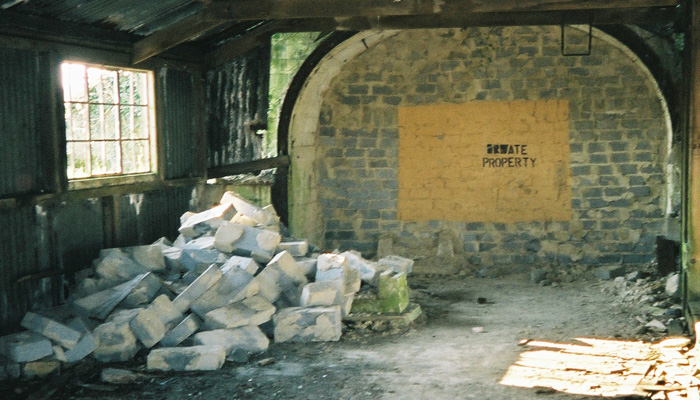 The expansion was good news for Wansdyke Security but not so good for us and it was sad to see a piece of wartime history as unique as Monkton Farleigh being locked up for good behind closed doors. A place like Monkton Farleigh should really be open to the public to visit, and for a time it was. For a brief period in the mid-1980s the quarry operated as a museum.
Our time exploring Monkton Farleigh might have been short-lived, but it got me hooked. Like anything I'm passionate about, I built a website. On the very day of my first visit to the quarry on Saturday 6th April 2002 I set up Nettleden.com. 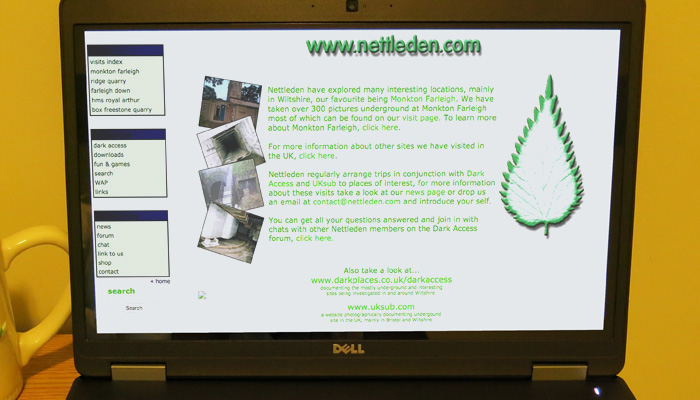 Nettleden is now fifteen years old and has gone from strength to strength in that time. The site has documented my journey as I've explored and photographed almost 100 other quarries, bunkers and underground sites of interest around Corsham and across the country.
It's a hobby that encouraged me to learn more about our country's wartime history and put in to perspective the amount of work and sacrifice that went into the British war effort.
I've also met some great friends through underground exploration, some of my best friends still today are people I've met while exploring various dark holes in the ground.
Tags:
undergroundurbex