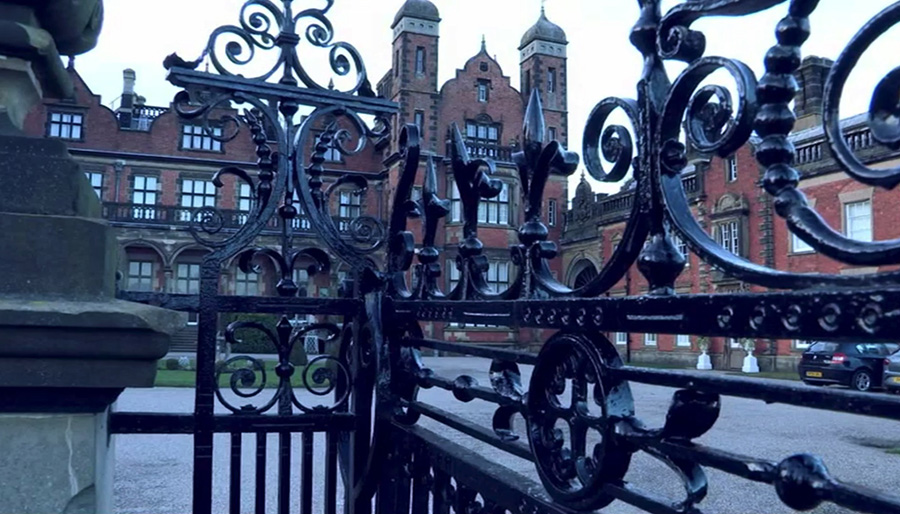 Yvette Fielding and the team investigate a large manor house in the Cheshire countryside, which is no stranger to them, having visited previously in 2010 as part of the Most Haunted 'Live Series', and it never fails to deliver paranormal activity.
Nestled in the idyllic Cheshire countryside near Macclesfield is the magnificent Capesthorne Hall, once owned by its namesakes the Capesthorne, the manor was bought by the Ward family in 1386 and it was John Ward that later had the house that stands so majestically today built.
In 1719 he engaged the services of William Smith and his younger brother Francis to build the property, which was finished in 1732. It stood for almost 130 years before being almost completely destroyed by fire in 1861, leading to a re-build of the whole mid-section. 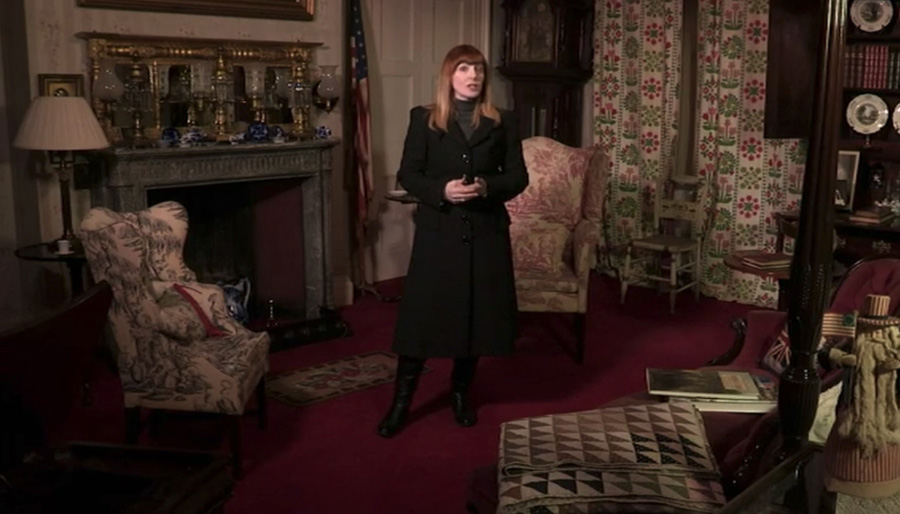 The house was said to be so haunted that in 1987, a former resident, Sir Walter Bromley-Davenport called in a priest to have the house blessed, but the paranormal activity didn't let up. There have been reports of disembodied limbs, including a hand floating past a window and a head floating across a corridor.
One of the bedrooms, known as The American Room, is said to houses a poltergeist that has a habit of throwing books off the shelves, dark shadows and often seen in this room too and ghostly voices are also heard.
In an upper-floor apartment which is no longer used, guests have reported a strange atmosphere and have reported unexplained knocking noises and dark shadows.
On the grand, main staircase, people have reported a feeling of dread and strange smells. One is a sweet smell, which is said to be similar to a hair tonic that Sir Bromley-Davenport used to use, and the other a repulsive smell, the type which is often associated with negative energies and demons.
The show's resident demonologist, Fred Batt said, "Capesthorne Hall is a beautiful house, but what fascinated me is the land itself. Now on the land, there's apparently three barrows here, which in other words are burial mounds. One of them goes back to the bronze age, now in the bronze age there was a lot of human sacrifice, and I'm sure that's what I'm going to look for on this land tonight." 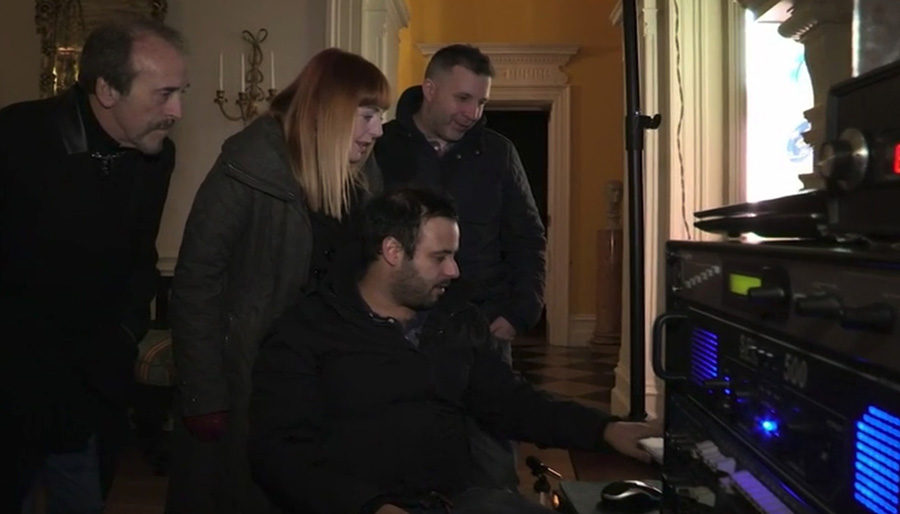 Before the investigation got underway, Yvette, Fred and skeptic, Glen Hunt went to check in on Eamonn Vann-Harris to see if he'd caught anything of interest on his EVP machine, a device which aims to capture the sound of spirit voices.
Eamonn plays the audio to Yvette and the gang, which he describes as "a conversation going on between possibly two spirits." Most of the audio recording just consists of noise, but amongst it there is one clear voice, it's unmistakably a voice.
However, the words are a little mumbled but sound like they start with "yeah, surely," the rest is indistinguishable. Eamonn described the audio as, "possibly one of the best I've ever recorded." 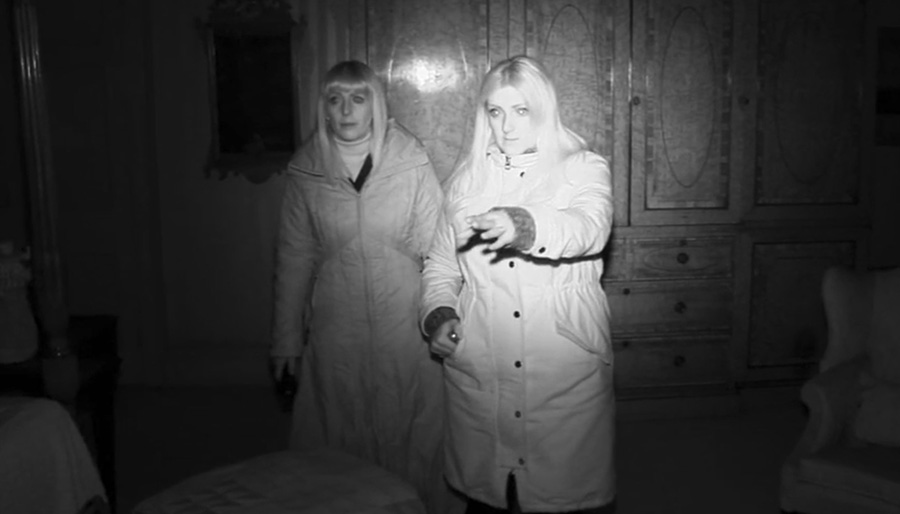 Yvette and her hubby, Karl Beattie started off the investigation in the American Room, they were joined by Leah Walton, a new member of the team who appeared in a few episodes at the start of the series but has been missing ever since.
Yvette started off by calling out to the spirits, "can you stop the clock," while the team concentrated on its ticking in the darkness. Both Yvette and Karl got excited when, for a second, they thought the clock had stopped.
Leah then thought she was seeing white lights in the darkness, they focussed for a little while and Yvette tried to encourage the spirits to show themselves in light form, but the phenomenon didn't repeat itself.
Moments later Leah screamed as they heard a bang, the camera spun around to reveal a book on the floor in the middle of the room. 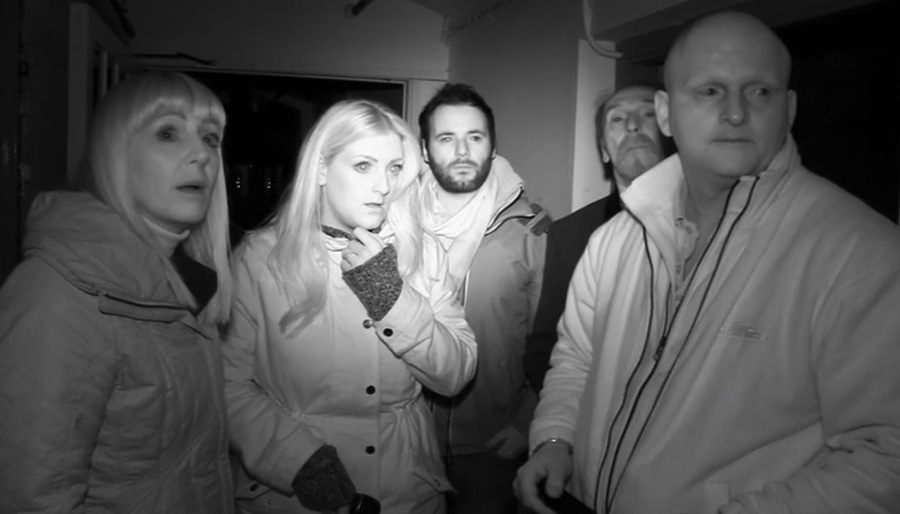 Later in the episode, Yvette, Glen, Fred, Eamonn, Fred, Leah and Stuart Torevell went down to the large cellars, which were used an air raid shelter during World War II. The team heard several weird noises, one of which Yvette said sounded like a voice, while cameraman Gregg Smith thought he heard movement.
They heard several more thumbs and thuds and reporting seeing an unexplained red glow at the end of a corridor. As they discussed the glow they heard a bang at their feet and found a pair of pliers had be thrown. Stuart said that they hit his back, before landing on the floor.
Later something else was thrown, upon investigation they found it was a block of wood, which probably came from a nearby window sill.
As they continued to wander around the cellar, Leah screamed, swore and jumped behind Yvette for protection. She said "something just touched me! I'm not even joking, something just flew at my head." The object ended up in the mood of Leah's coat. The moment was caught on camera but it wasn't clear to see the object moving through the air. 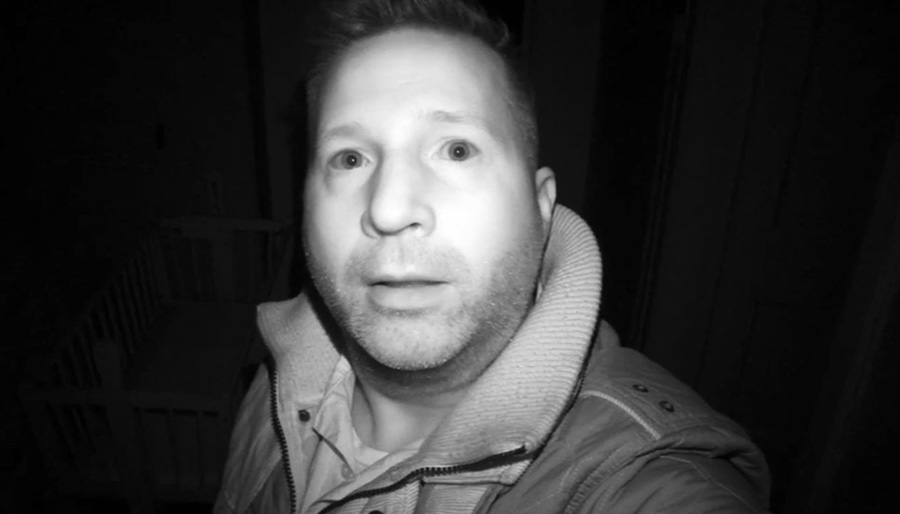 Most of the activity in this episode took place in the apartment on the upper floor of the house, and Glen was first to check it out. Early on in the episode he was nominated to there alone.
The area, which would have once been servants' quarters. The self-contained area of the house includes its own living area, kitchen and bedrooms.
Upon entering, Glen said, "so here I am, I'm on my own on the top floor of the building. I'm not sure if you're picking up that noise, but there is some banging."
The banging was being picked up on camera, Glen said that he would normally explain a sound like this as water pipes, but all of the services, including water, have been turned off in this part of the building as it is currently unoccupied.
He then started to call out, "if there is anyone in here with me, please would you knock twice." He heard several bangs, but nothing that could be described as two knocks.
Glen was unable to explain the knocking sound to start with, but when he climbed a small staircase and exited the building on to the roof, the source of the sound became clear. Right above the room on the roof was a flagpole that was blowing in the wind. 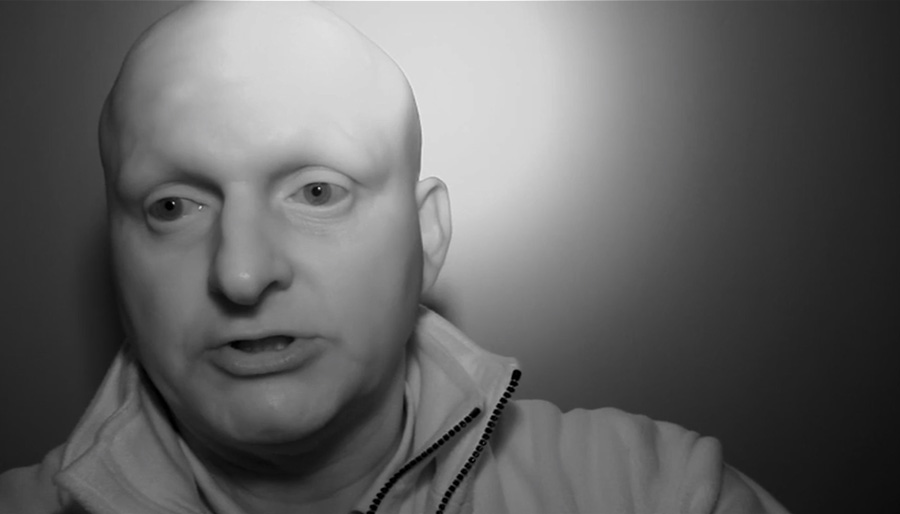 Stuart was next to be nominated to go to the apartment alone, while all the rest of the crew were accounted for and taking a break elsewhere in the building. Yvette said that, "because of what happened, we decided for the first time, to show a vigil in its entirety."
The unedited footage starts with Stuart opening the door and entering the apartment, and he hadn't even been in the apartment for one minute when the cot in the hallway at the bottom of the stairs started rocking on its own.
Stuart picked up a tennis ball and rolled it along the hall, it stopped not far from the foot of the stairs, he said, "if there are any children up here, please roll that ball back."
Moments later, while in one of the bedrooms, he said he could hear what sounded like footsteps, this was followed by loud banging sounds. Stuart went back out into the hallway where he saw the tennis ball he'd just thrown bouncing down the stairs, which lead to the roof.
Stuart went up to the top of the stairs, the small door at the top was locked, meaning no one could have thrown the ball from the top of the stairs.
After hearing several more bangs and footsteps, Stuart told himself, "don't go down any further because you don't know what's round the corner, anything can happen." But despite his own warnings, he continued down the corridor to the source of the bangs.
Too afraid to go into the room at the end of the corridor, he poked the camera around the door frame before saying "I'm going to have to go, me nerves are shot to s**t, I can't do this any longer now." As he was about to leave he heard another sound and walking around the corner, he found the tennis ball in the middle of the floor, now in a different location. 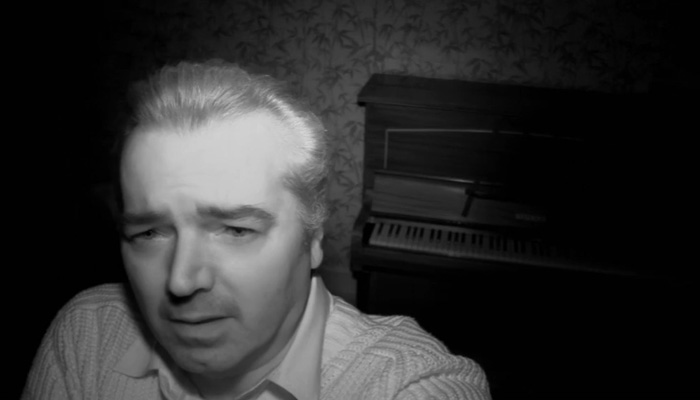 After Stuart's fright, Karl was next to conduct a lone vigil in the apartment. He was at the foot of the stairs throwing the tennis ball, trying to recreate Stuart's experiences when he heard the sound of the piano in the room at the other end of the apartment.
He then ran around the apartment with the camera to ensure it was empty and that there was no one who could have pressed the keys on the piano.
Karl then stood a couple of meters away from the piano with his back to it, while holding the camera selfie-style so we can see him and the piano in shot. Karl said "can you play the piano again." Almost immediately, a note is played as if someone or something had pressed a key. Karl jumped out of his skin, clearly frightened by the unexpected tinkle and shouted, "crying out loud!"
He then heard what he thought sounded like someone coming up the hallway and went to investigate, but as soon as he was there he heard the piano play itself from the other room, and ran back in, with the hopes of catching it playing again.
Karl said, "I am really scared, that's not right. The trouble is, I feel like I'm surrounded..." but was interrupted by a knock coming from a cupboard.
Karl said he was feeling disorientated as he made his way through the apartment, then suddenly the camera fell to the floor and turned off. Seconds later we see Karl again who says "I just passed out, I need to get downstairs."
After all these scares, Karl didn't last much longer in the apartment and headed back to safety as the episode came to an end.
For reviews of all of the new episodes, plus highlights and evidence from the shows, and to find out when Most Haunted is on next, visit the Most Haunted episode guide.