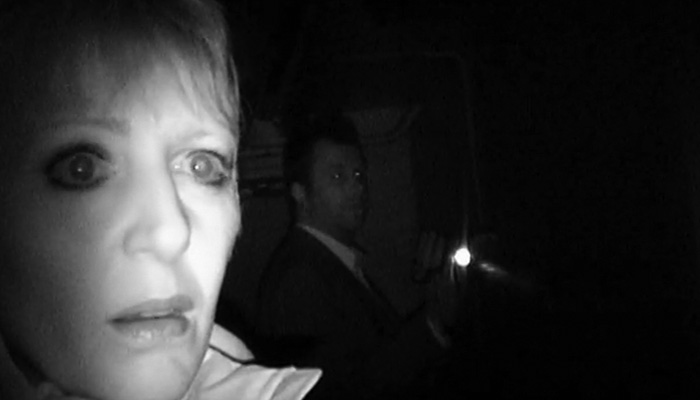 Almost ten years after an episode of the long-running paranormal investigation show Most Haunted aired, viewers have spotted something odd in the background of one of the shots that went unnoticed at the time.
A clip taken from the 11th series of show has made headlines in the last 24 hours after a YouTuber spotted what he thought was a spook. The episode, which aired in December 2008, seems to feature an eerie white figure that was caught as Yvette Fielding and her team ran away from a scare in the basement cells at Exeter Old Courts in Devon.
The former jail and courtrooms were built on the site of an old Roman settlement following the Norman conquest and have a long, and often bloody history. Many would have been sentenced to death here over the years and it was the location of the infamous Bideford witch trials.
Yvette was hunting the ghost of the former inmate named Cornelius Conelly in the basement, where she was joined by the show's psychic medium Brian Shepherd, historian Lesley Smith, makeup lady Catherine Howe and parapsychologist Ciaran O'Keefe.
Suddenly in the darkness the team started to hear what sounded like strange disembodied voices coming from around them and then footsteps, which sent the team in to panic mode, not helped by Brian shouting, "it's coming our way."
As Ciaran spins the night vision camera around to see what's going on the strange ghostly apparition can be seen moving across the screen in the background of a shot, but the moment seems to have gone unnoticed for years due to viewers' attention being on the panicking crew. 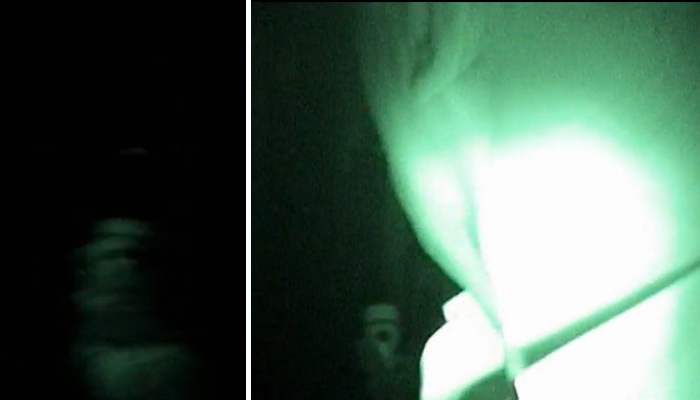 Watching the clip of the episode, its easy to see why some believe this is a genuine manifestation caught on camera by the Most Haunted team. But did these professional ghost hunters, who at the time already had six years of experience behind them, really miss a piece of paranormal evidence?
Well, perhaps not. It's hard to tell in the low quality YouTube version of the show, but any true Most Haunted fan with the 11th series on DVD and a frame advance function on their DVD player will be able to slow the original clip down and uncover what's really going on here.
As the stills above show, the anomaly that was caught on camera is nothing more than a torch. The movement of the panning camera has distorted it beyond recognition. The entire sequence only consists of around 20 frames, but in a handful of those it's clear to see that we're looking at nothing more than a torch in Brian's hand.
Seconds before Yvette screamed and the shot was captured, Brian is seen to turn his torch off, making it even harder to identify what it is in the subsequent shot.
Even if this isn't genuine proof of the paranormal, it goes to show how much attention to detail fans pay to Most Haunted, and how the show is able to make headlines even with a decade-old blip on a camera.
The show's executive producer, Karl Beattie said on Twitter, "how wonderful that an episode of @OnlyMostHaunted which was filmed over 10 years ago still gets media attention. I will look at the master tapes from that episode, well done to whoever spotted it, it looks great!"

It's not the first time that Most Haunted have caught a ghostly apparition on camera. In 2017 during an investigation of the derelict stable block at Wentworth Woodhouse the team caught a figure on camera which Yvette described as the show's "most groundbreaking footage" to date.
It was Karl and fellow crew member Stuart Torevell who caught the eerie figure on camera walking up some steps during a nighttime vigil.
Yvette later admitted that she actually burst into tears after seeing the clip, "I was so excited and overwhelmed with the fact that, all of these years on Most Haunted, to me, that is the best piece of paranormal evidence."
Karl had rested the camera just inside a doorway, looking out at a dark corridor when Stuart spotted the figure which was also caught on camera. Believing it to be another member of the team or someone else in the building, Stuart chased after the figure only to find there was no one else on the floor.
This might not be the lastly ghostly figure capture by the show, which is now in its 16th year and set to return for a 23rd series in the autumn.
Karl teased that their might be some evidence in the upcoming series that could trump even the Wentworth Ghost. He said on a web chat recently that they have "the best evidence we've ever got." Not giving much away, he added, "something happened and we checked it out and it could only have been paranormal."
For reviews of all of the new episodes, plus highlights and evidence from the shows, and to find out when Most Haunted is on next, visit the Most Haunted episode guide.