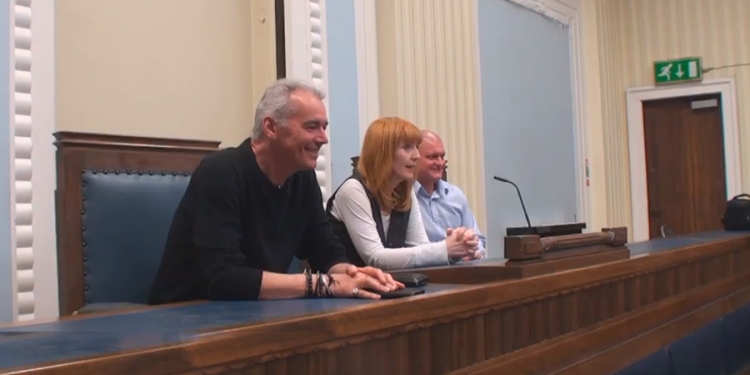 Photo: youtube.com
The stars of the long-running ghost hunting series Most Haunted have told fans that in the future the show could move away from traditional television in favour of more flexible methods of content delivery, such as online streaming platforms.
Karl Beattie broke the news during a live Q&A with fans at the haunted police station and courts at Accrington. Sat beside his wife and co-star Yvette Fielding, Karl talked frankly to fans about the future of the show and their ongoing discussions with television executives as a result of recent changes in the television industry.
During the Q&A, which was also streamed live on Most Haunted's official YouTube channel, Karl told fans who were sat in one of the building's old court room, "when we were last here [...] doing a piece to camera, we actually had to stop because there was so much knocking that we couldn't do it."
A subtle hint that a future episode of the show will feature this location. When Yvette opened the panel to questions the first was from a guest who asked, "when will the episode filmed here be broadcast?"
It was at this point that Karl admitted, "we don't know to be fair". The 24th series of Most Haunted aired on UKTV's REALLY channel earlier this year. The channel has been the home of the show since 2014 and to date they've broadcast nine series.
Karl confirmed that series 25 has already been shot and edited and that the episode featuring Accrington Police Station and Courts will feature in this series, but said that they're not sure if the show will continue to air on REALLY. Karl told the audience members, "we don't know where we're going to put it".
He then got stuck into the nitty-gritty of television politics and the current state of play, "a lot of people don't realise that UKTV who own Really were part owned by the BBC and Discovery and they've now split up the channels."
Karl is referring to the two broadcasters' deal that was made in April of this year to split up the 10 channels run by UKTV. This means that BBC Studios will now take over seven entertainment channels, while Discovery will take full ownership of three Freeview channels including Really.
The Most Haunted team are in talks with Discovery. Karl said, "in our discussions with them they really do want to promote the American shows more than the UK shows. We had to deal with that with Really when UKTV owned them."
He added, "I think we wouldn't be doing this show any justice, or you guys who are watching the show any justice, by allowing it to go on a channel that isn't going to give it due consideration".
As part of these changes, some episodes of the show have already started disappearing from UKTV Play, the networks on-demand service. Karl explained that this is due to the five year license coming to an end, "we've taken the rights back and each year the rights for the Most Haunted you see on Really will come back to us and we will air them on another platform."
As for what this new platform will be, Karl says "we don't quite know what that's going to be yet." He confirmed that the team are already in talks with four other channels and are considering plenty of other ways to get fans the content they want, "our prime concern is to get you the shows that you want to see in the way you want to see it."
Fans shouldn't be concerned about the news, we're pretty sure Really aren't going to want to lose one of their top-rated shows without a fight. All ten episodes of Most Haunted that broadcast over Halloween last year out performed pretty much everything else on the channel, plus there are plenty more options for fans.
Earlier this year the team launched their official YouTube channel, where they've been uploading unseen footage, outtakes and bitesized investigations. With children and young adults now watching a third less broadcast television than they did in 2010, preferring instead to watch online, YouTube could be the perfect new home for the show - perhaps even Netflix or Amazon Prime.
Of course there's benefits to this too as Karl reminds fans, "there's so much footage that we've got that you guys won't have seen because we won't be allowed to show it on a television platform." Which is why they're looking for a more flexible broadcaster or platform, "we want somebody that's going to support the brand and actually allow us to let them know what you guys want to see."
Later in the live chat, Karl talked about the show's current format and its lack of psychics in recent series, "we're now making the show we've always wanted to make. It's a lot freer, a lot easier, we go where the activity."
Yvette and Karl are pretty good at communicating with fans viewers social media, so it's likely fans will hear more about the future of the show soon. For the last few years a series has aired on Really throughout October, so we're pretty sure we'll know more before Halloween.
For reviews of all of the new episodes, plus highlights and evidence from the shows, and to find out when Most Haunted is on next, visit the Most Haunted episode guide.