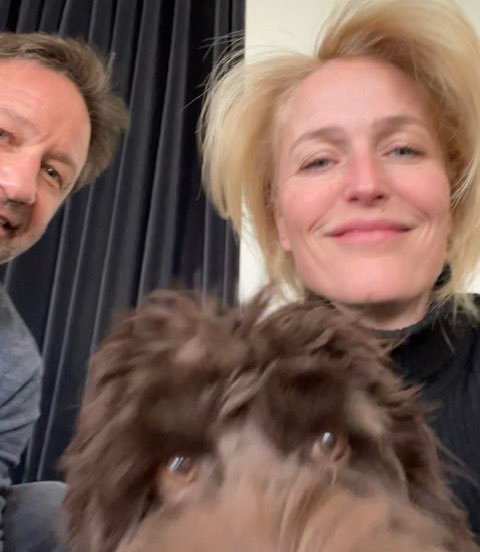 Photo: © @GillianA
A photograph tweeted by Gillian Anderson sent Twitter into meltdown as it showed her reunited with her X-Files co-star, David Duchovny.
The pair played two FBI agents, Dana Scully and Fox Mulder, assigned to investigate paranormal cases in the classic 90s science fiction series, which first aired in 1993 at the height of the world's obsession with UFOs and alien visitation.
The photo, which showed David being introduced to Gillian's dog, Stella, racked up hundred of thousands of likes and almost 10k re-tweets.

Despite the buzz around the tweet, fans shouldn't get too excited then photo doesn't signal a reboot. Although they have in the past. The original series came to an end in 2002, but the Mulder and Scully reappeared together in a 2008 feature film and a newly rebooted series in 2016.
The recent reboot and films were not universally well-received, but the original X-Files television series lives on as a cult classic.
The series followed the agents as they investigated aliens, ghosts, monsters, shapeshifters, and just about every other type of supernatural entity you could imagine, as well as battling with secretive and shady arms of the government as they went.

Photo: © @GillianA
The two snaps tweeted by Gillian showed her and David in a couple selfies with Stella the dog, along with the caption "Stella made a new friend today."
Tags:
paranormaltopical