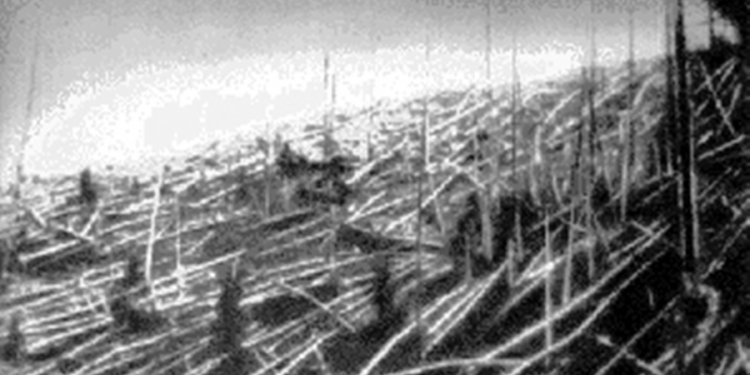 Photo: © CYD
One of the most enduring mysteries in recent earth history, what caused the explosion in Tunguska in 1908, has had a new possible explanation proposed in a recent paper published in a recent edition of the monthly notices of the Royal Astronomical society.
The Tunguska Event, a large explosion which occurred on the morning of the 30 June 1908 in Siberia, Russia, devastated an area of approximately 830 square miles, flattening 80 million trees.
The precise reason for the explosion has been a matter of debate ever since, and the unexplained nature of the event has helped contribute to its infamy. You'll find references to Tunguska pop up in numerous books, films, tv shows, computer games and comics, including the original 'Ghostbusters' film, 'Indiana Jones & The Crystal Skull', an episode of 'The X-Files' and even 'Doctor Who'. As is so often the case, where there is a vacuum in terms of a concrete explanation for what happened, aliens have been proposed. One theory is that the Tunguska Event was caused by an exploding alien spaceship, or that perhaps the blast was formed by an interdimensional hole in the fabric of space time being opened up. In the absence of all evidence for those theories, we'll stick with what the scientists came up with, as 'boring' as that might be!
The force unleashed by the explosion at Tunguka has been calculated as being somewhere between 3-30 megatons of TNT. Initially, the reason was believed to be a meteorite impacting with the earth. The epicentre of the explosion in the area could be pinpointed as the blast had pushed trees over in a radial pattern outward from the epicentre.
Eyewitnesses spread across the sparsely populated region reported seeing a fireball in the sky, a powerful wind, loud sounds and heat.
However, when scientists researching the event reached the assumed impact area, no signs of an impact were found. Even a relatively small meteorite travelling at seven miles a second would produce a large, distinct impact crater. Other clues were found, scientists examining soil and trees in the area found microscopic spheres of silicate and magnetite, an iron mineral, which both contained high proportions of nickel, typically found in meteorites of extra-terrestrial origin.
Further analysis of soils in peat bogs in the area found spikes in various isotopes, including iridium, which is believed to be derived from the remnant of the meteorite which caused the explosion.

No crater – no meteorite

But with no impact crater, what caused the explosion? The leading theory recently has been that an asteroid (asteroids are larger than meteors and meteorites, which are also classified as having travelled through space and landed on earth, while asteroids don't) entering the earth's atmosphere underwent immense heating as it travelled at over 7 miles a second and then exploded at a height of between 4-6 miles producing an explosion of between 5-30 megatons of TNT. This would explain why no impact crater was found, and also why the scientists exploring the area have found trace elements of what could be remnants of the rocky body.

Close but no cigar

The new theory published in February's prestigious Monthly Notices of the Royal Astronomy Society is that an asteroid flying through the earth's atmosphere at a low angle, and then out again, could have caused the characteristic blast pattern. The heavenly body brainiacs have modelled various sized objects, from 50-200 metres in diameter, made from iron, stone and ice, flying at various angles through the earth's atmosphere. The team of researchers, led by Daniil Khrennikov at the Siberian Federal University, believe that the shockwave produced by this drive-by asteroid would be sufficient to cause the damage observed. Additionally, the fast-travelling object skipping through the atmosphere and then back out to space again would cause the fireball reported by eyewitnesses, whilst leaving no impact crater behind.
The final conclusions of the researchers is that the object was between 100-200 metres in diameter, flew through the earth's atmosphere for about 1800 miles, and would have stayed above an altitude of 11 kms, whilst travelling above 7 miles per second.
We're expecting further work from this team as they have yet to solve the mechanics for the production of the massive shockwave generated at the event, so the case remains far from closed.

Whilst it might seem of limited value to examine an event that happened over 100 years ago, that could not be further from the truth. On Monday 4th July a previously unseen asteroid the size of a large truck missed the earth by only 4300 miles, which is pretty close in astronomical terms. In fact, astronomers first noticed Asteroid 2020 JJ at the point when it was closest to earth – they'd never seen it before. Although only 3-6 metres across, and likely to burn up completely on entering the earth' atmosphere, it did come closer to earth than many earth-orbiting satellites, so could have destroyed one or more of those on it's way past.
Tags:
unexplainedtopical