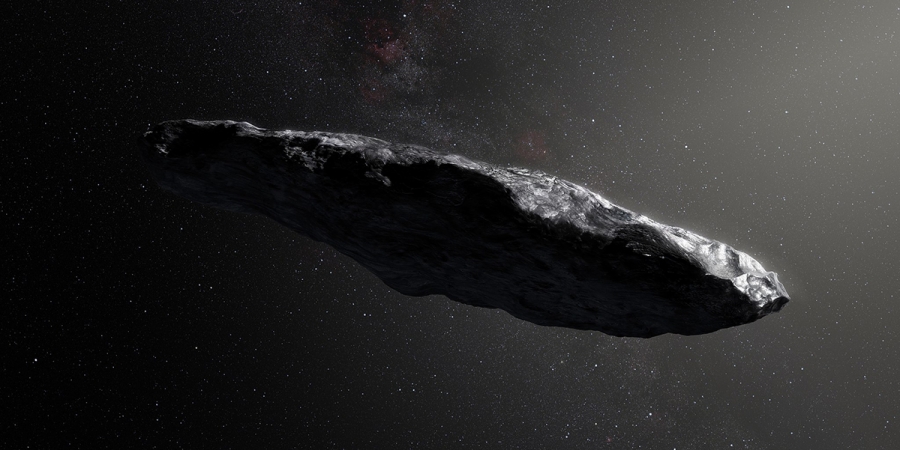 Photo: © ESO/M. Kornmesser
In 2017 the unusually-shaped 'Oumuamua comet passed close to Earth, what was unique about this object was its origins. It is the first time we've observed an interstellar object passing through the Solar System. In his new book a top Harvard astronomer argues that the object wasn't a comet but was in fact alien technology and an attempt at first contact.
The roughly half-mile-long object was unusually flat, moving at an irregular pace, and according to observations made by the Spitzer Space Telescope was at least ten times more shiny than a typical comet. Astronomers had never seen a natural object with such extreme proportions in the solar system before.
Avi Loeb, a professor of Science at Harvard University, is an Israeli-American theoretical physicist who works on astrophysics and cosmology. In December 2017 he backed a plan to use the Green Bank Telescope in West Virginia to listen for radio emissions from the comet to see if there were any unexpected signs that it might be of artificial origin.
A year later he submitted a paper on the unusually-elongated object suggesting that the 'Oumuamua could be  an artificial solar sail. This would account for its odd shape and strange pace as it may have been being accelerated by solar radiation.
Now Dr. Loeb's theory is being published in his new book, 'Extraterrestrial: The First Sign of Intelligent Life Beyond Earth',  which describes the possibility that 'Oumauamua may have be alien technology.
Although it's not known exactly what the blunt-shaped object is, Loeb is convinced that the object could have been sent by a distant alien civilisation, after all even NASA have confirmed that it did come from another solar system and that it moved in a non-comet-like way.
It's a bold claim from such an established scientist, author of five books and 800 scientific papers. Loeb directs the Black Hole initiative and the Institute for Theory and Computation at Harvard University. He was the longest-serving chair in the history of Harvard's astronomy department and a member of the President's Council of Advisors on Science and Technology. He also chairs the Advisory Committee for the Breakthrough Starshot initiative and the Board on Physics and Astronomy of the National Academies, and serves as the science theory director for all initiatives of the Breakthrough Prize Foundation.
The reality is that the vast majority of experts who have studied 'Oumuamua agree that Loeb's is very unlikely and think the object is most likely a natural phenomenon. Other researchers have stated that there is insufficient evidence to seriously consider the possibility that the object is of alien origin. Even the Green Bank Telescope and the SETI Institute's Allen Telescope Array which were assigned to search for radio transmissions emanating from the object failed to obtain any results.
You can decide for yourself when Loeb's book is released in the US on January 26, and here in the UK in early February. You can pre-order it on Amazon now.
Tags:
spacetopicalscience