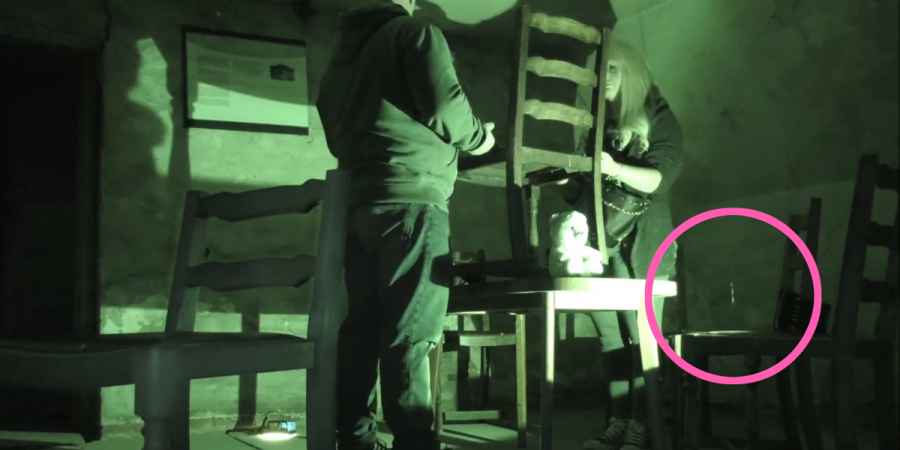 A team of paranormal investigators have shared a clip of what they believe to be compelling evidence of the paranormal at a haunted building in Derbyshire.
Charlene Lowe Kemp and her team, known as Paranormal Hauntings, were investigating Gresley Old Hall in Swadlincote earlier this month as part of a live stream on Facebook when the incident occurred.
The haunted Derbyshire hall is an 18th century Grade II listed building, which is built on a site once occupied by a priory, which dates back to the 12th century. The hall is said to be haunted by a ghostly maid who was burnt to death, it's claimed that the room where she died was bricked up and ever since visitors have felt unexplained burning sensations and the mysterious smell of burning.
The spooky clip is taken from the team's static camera while they were conducting an investigation at the hall. At the time they heard a sound that they thought may have been a fly dropping dead, but after reviewing the footage the team now think something might have been thrown at them. The clip appears to show something appearing in mid-air before falling to the ground with a bang.
Take a look at the clip below and see what you think the strange movement and accompanying sound is...
The incident happened while Charlene was conducting an EVP session at the hall with her fellow investigators, Aimee Sirdifield, Simon Wilson and Patt Cuper. The moment was being streamed live on Facebook to followers of Paranormal Hauntings. An EVP, or electronic voice phenomenon, is a form of supernatural communication that involves capturing the sound of spirit voices in audio recordings.
However the team weren't just using an audio recorder, they also had what looked like a normal plush bear sat on a table. Although it looks like a toy, this interactive bear is designed to be played with by ghosts acting as a trigger object. A trigger object can be anything, for example in a haunted prison you might use a bunch of keys or in a location with a military history you might use a medal. Since some of the paranormal activity at Gresley Old Hall has been attributed to child spirits, a ghost-hunting bear is a good fit for the hall.
During the session the bear suddenly lit up indicating potential paranormal activity, but at the same moment Charlene and the team heard an unexplained bang, which they couldn't identify the cause of.
Speaking on a live stream after the event, Charlene said, "at the time there was a fly flying around, we all heard this bang and we made a joke out it, you know, we said 'has that fly dropped dead?'" The ghost hunter joked that it would have to be wearing Doc Martins to make that much of a clatter.
Charlene said, "I looked on the floor and I couldn't see a dead fly and I couldn't see anything that had fallen from the ceiling" and nothing was seen by any of the viewers of the live stream, but luckily the team had another piece of kit set up - a second camera.
The team often use an additional camera so they have two different angles giving them an extra chance of catching activity on camera that's not caught on the live stream. Charlene explained, "sometimes when we do a location we have the night vision camera going as well," and on this occasion the use of an extra camera really paid off.
It was only when Simon reviewed the footage around the time of the bang that the team found they'd caught something on camera. Charlene described what was seen on camera as "a light that appears at my mid-height and then it goes to the ground with a bang." The falling object appears to glow, although Charlene suspects that the object is simply being illuminated by the infrared light of the night vision camera, but she said "it was the thud that I don't get," adding "it's a very very strange capture and I really don't know what to make of it."
Charlene thinks that one possible explanation for the incident is that it's the result of an apport haunting, this is when an object is transferred from one place to another through a non-understood paranormal method. Apports are often associated with poltergeist activity or séances, but can also result in objects appearing from nowhere during investigations.
For more paranormal discussion, debate and news check out Paranormal Hauntings' Facebook page.
Tags:
derbyshire.paranormaltopical