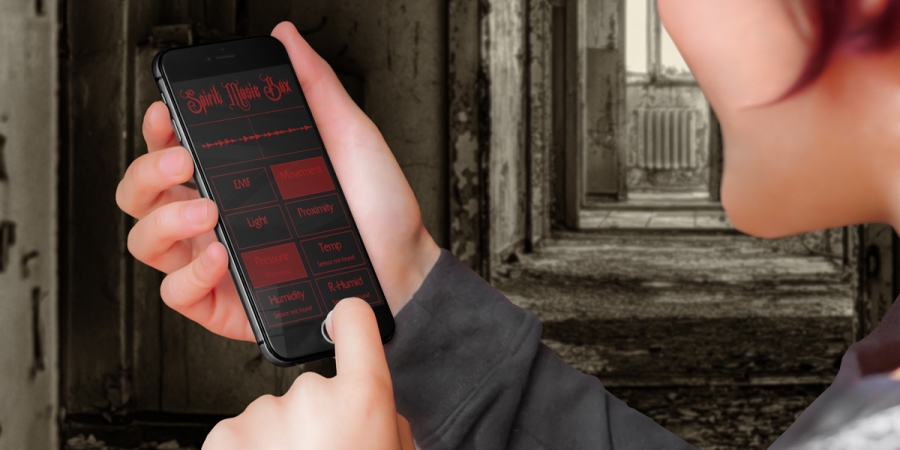 There's no denying that specialist mobile phone apps have become an increasingly popular tool on paranormal investigations, but most people bulk at the idea of using an app to track down or communicate with the dead. However, the creator of a new app what to change your mind and they might just succeed.
Paranormal researchers are often skeptical of ghost hunting apps because they're not convinced that a phone can detect ghosts. And of course, this is true. There is no "ghost detector" in a mobile, but phones are pretty smart and they do have a whole array of sensors that can be useful on a ghost hunt.
Although these sensors exist, some apps attempt to convert the input from the sensors into words and phrases, a process that is ambiguous at best and is never fully explained by the developers of the apps.
This is where the Paranormal Spirit Music Box app from Spotted: Ghosts is different. It uses the phone's in-built sensors to perform a very simple task, playing a piece of music. The app replicates the functionality of a type of physical ghost hunting device that uses motion detectors to trigger a music box.
It works by playing an eerie ditty if there is an unusual spike in the electromagnetic field around the phone or a sudden movement. This should be appealing to any spirits of the long-dead and act as a trigger to encourage them to engage further. Depending on the make and model of the phone, the app can also respond to proximity, and changes in temperature, air pressure and humidity.
What makes the app's use of sensors even more powerful is the fact that you can turn off different inputs. For example, if you switch off everything other than the light sensor, then the app can be used to trigger when there are significant changes in the light in the room you are investigating. Being able to turn sensors on and off in this way makes it very easy to test the device and understand exactly how it triggers. Even with all the sensor's turned on, the app's intuitive interface tells you exactly what has triggered it.
You can see a demo of the app in action below...
The Samsung phone shown in the demo has a full compliment of sensors. Not all sensor types will be available on all phone models, but the app still works without them. It just means that the missing sensor won't be used to detect anything.
We're not saying that ghosts can definitely affect a magnetometer, gyroscope or barometer. But these are the things the phone can detect, and these same type of sensors are the backbone of many custom-built ghost hunting devices. So, if you trust that an EMF meter, REM-Pod or an Ovilus can work, then you should put the same faith in this app.
What makes the Paranormal Spirit Music Box app perhaps even more robust than other apps is that it's very honest and transparent about how it uses the input from these sensors. It's not claiming to convert the signals into meaningful words or attempts at communication, all it does is play a piece of music that sounds like it's coming from an old mechanical music box.
Again, we're not saying for certain that this app is guaranteed to track down spooks, but there is no denying that if it's set to movement detection only, it will trigger if the phone detects movement. Similarly the EMF mode will cause the app to trigger if there is an unusual spike. So, the app does have some genuine value on an investigation.
One of the most surprising methods of detection is the proximity sensor. When activated it will cause the music box to play when you move your hand within a few centimetres of the phone. This isn't done using the phone's camera as you might suspect, this genuinely is a proximity detector. So if the device triggers due to proximity, then you can be sure something odd must be going on.
The app, which has already peaked as a top five Android app, works best on Android phones, which have more sensor inputs available to app developers than iPhones, but the app is still a useful tool on both makes of phone.
Like all paranormal tools, Paranormal Spirit Music Box can give false readings, but the app's launch screen gives some tips on how to avoid this. We whole-heartedly agree with these tips and would go as far as to say that they should be followed when using any app on a ghost hunt. These guidelines include turn the phone to flight mode to ensure that WiFi, Bluetooth or any other type of connectivity will not give false readings.
It's also recommended to place the phone on a flat surface before you start the app and to leave the device untouched during the investigation. It may seem like common sense, but some investigators do wander around with phones while running apps, sometimes even waving them through the air. Doing this can of course affect the sensors. Changing the alignment or position of a phone can expose it to varying levels of electromagnetism, light and many other factors, not to mention firing the motion sensors.
Not only is the Paranormal Spirit Music Box a really useful and valid app, it also does a lot to help the reputation of ghost hunting apps, which should in general be treated with a great deal of skepticism. Paranormal Spirit Music Box is also a very cheap alternative to a physical ghost hunting music box, which can set you back hundreds of pounds.
If you want to try Paranormal Spirit Music Box for yourself you can get it for Android on the Google Play Store or iPhone on the Apple Store now.
Tags:
ghost huntingparanormalapps