It's the month of Halloween so we asked novelist, screenwriter and filmmaker Frazer Lee which movies we should really be watching to put us in the mood for the scariest night of the year. 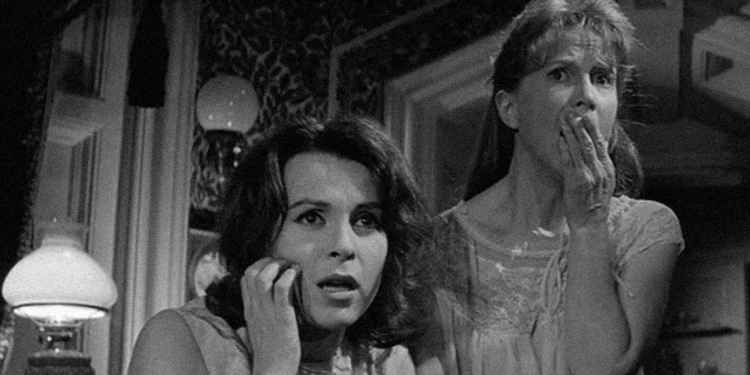 The Principle of Creative Limitation preached by screenwriting guru Robert McKee (so memorably portrayed by Brian Cox in Spike Jonez's 'Adaptation') teaches us that "less is more." Having fewer resources, a modest budget, and an almost air-tight shooting schedule can reap rich rewards in terms of problem solving and creativity. Advice that every hackneyed horror remake with its obligatory CGI-laden third act should perhaps heed from now on!
Case in point — Robert Wise's 1963 masterpiece 'The Haunting'. Based on Shirley Jackson's disturbing novel 'The Haunting Of Hill House', Wise's film has a small cast, a haunted mansion and… well, that's about it. The film is a masterclass in achieving agonising tension and full-blown scares using only a choice camera angle, a bit of set dressing and impeccable sound design. Watch it alone with the lights off and try to tell yourself it isn't getting under your skin… Things will go bump in the night, starting with your heartbeat.
Once you've recovered from 'The Haunting', you owe it to yourself to see Jack Clayton's 1961 film 'The Innocents' (adapted from Henry James's gothic novella 'The Turn Of The Screw'). With a fine cast, including Deborah Kerr, and none other than Truman Capote on co-typing duties, this lavish monochrome production oozes gravitas. The key words here are: 'creepy' and 'children'. Kerr plays a Governess who takes charge of two youngsters at a country pile after the untimely demise of their previous nanny. Her sanity is taken to the howling edge as she tries to unravel the ghostly goings on at the house and in the spooky grounds. The now infamous 'window sequence' makes for brilliantly unpleasant viewing.
Piers Haggard's 'Blood on Satan's Claw' (1971) is what the director described as 'folk horror', which has become a cultural phenomenon thanks in part to the Folk Horror Revival Facebook Group and their imprint of non-fiction books and collections of 'corpse road poetry'. There is a heady, eerie atmosphere from the ploughed fields of the opening sequence, to the atrocities the infected demon-worshippers commit in the woods. But it is the human face which provides arguably the scariest moment in the film. As Tamara Ustinov descends the stairs, she throws us a childlike, demoniacal look that would curdle the blood of even the most hardened cynic. You'll sleep with the lights on after this one.
Asian horror films have become a sub-genre in their own right, with hits such as Ringu and Ju-on remade and sequelized for Western audiences hungry for scares that drag them kicking and screaming into the ghost stories of another culture. 'A Tale of Two Sisters' (2003) is, on the face of it, a melodrama about dark familial secrets. But when a certain shadowy figure decides to float on the end of the bed, goosebumps are absolutely guaranteed. Kim Je-woon's film is quiet horror that may have you yelping aloud in terror.
And if A Tale of Two Sisters didn't rattle you enough, then take a horrified glance at Takashi Miike's 'Audition' (1999). Ostensibly a tale of unrequited love in a dying patriarchy, this film does for acupuncture what 'Marathon Man' did for dentistry. I took a friend to see it at the cinema and he was squirming in his seat and chewing on his knuckles to keep the screams inside by the end. He hasn't spoken to me since. I guess in the context of this piece, his reaction constitutes a good review.
You're still awake (no chance of sleeping after that lot) so why not go for the triple? 'Noroi: The Curse' (2005) is a Japanese found-footage horror that uses the mockumentary format to great effect — leading the hapless viewer into a world of nightmares half-glimpsed. Noroi's complex plotting and large cast of characters set it apart from its Western counterparts (notably the 'Paranormal Activity' series) but if you stick with it, you'll find it delivers deep chills that are difficult to shake off long after daybreak comes. If you cry when you watch this one, it won't be because of the heartfelt reunion of long lost family members — trust me, it won't.
Another horror that is set in a dilapidated building is 'Session 9' (2001) by filmmaker Brad Anderson who went on to direct 'The Machinist' and 'Fringe'. This sombre slow-burn follows the exploits of a Gordon and his demolition crew (which includes CSI's David Caruso) as they work to remove the asbestos from an old abandoned insane asylum. And you thought your day job was bad? What follows is a harrowing descent into not-so-merry Hell. The finale is gut wrenching and — rather like asbestos poisoning — will stay with you to your dying day.
Zombies and outbreaks are now so familiar to audiences via small-screen series such as 'The Walking Dead' and 'The Strain' that it's difficult to find anything, erm, fresh and genuinely scary. One movie you might not have seen, however, is 'Pontypool' (2008). Nope, this is not a horror spin on 'Fireman Sam' and the Welsh valleys, but is instead set in a small Canadian town where the dead walk and something is going badly wrong over the airwaves at the local radio station. This one draws you into its claustrophobic little world, before delivering on its premise with an outpouring of tension and high-stakes that will leave you gasping for breath.
Persian cinema isn't perhaps best known for its bone-chilling horror — until the release of 'Under the Shadow' (2016) that is. This indie gem works hard to make you care about the characters before inflicting a ghostly curse upon them. Set amidst the ravages of an urban war zone, Babak Anvari's striking debut film keeps its focus on the mother/child family unit and ratchets up the tension until it is almost unbearable. There are three utterly outstanding scares in this movie, which manages to tug at the heartstrings — as well as the hairs on the back of your neck.

Frazer Lee's debut novel 'The Lamplighters' was a Bram Stoker Award finalist for 'Best First Novel' and a Book Pipeline finalist. His other published works include the Amazon No. 1 horror/thriller 'Panic Button: The Official Movie Novelization', novels 'The Jack in the Green' and 'The Skintaker', and the 'Daniel Gates Adventures' series of novellas.
His screenwriting credits include the acclaimed horror/thriller feature film 'Panic Button', and award-winning short films 'Simone' and 'The Stay'. His film and television directing credits include multiple award-winning films 'On Edge' and 'Red Lines' (starring Doug "Pinhead" from Hellraiser Bradley) and the promo campaign for Discovery Channel's 'True Horror With Anthony Head'. His script doctor and story consultant engagements include commissions from The Asylum, Mediente Films International, Movie Mogul, and others.
Frazer is Head of Creative Writing at Brunel University London and is an active member of the Horror Writers Association and International Thriller Writers. His guest speaking engagements have included StokerCon, World Horror Con, London Screenwriters Festival, and the Guerilla Filmmakers Masterclass. He lives with his family in Buckinghamshire, England just across the cemetery from the actual Hammer House of Horror.
Official website: frazerlee.com
Twitter: @frazer_lee
Facebook: /AuthorFrazerLee
Goodreads: Frazer_Lee
Amazon: Author page
Add A Comment
Tags:
movieshorror