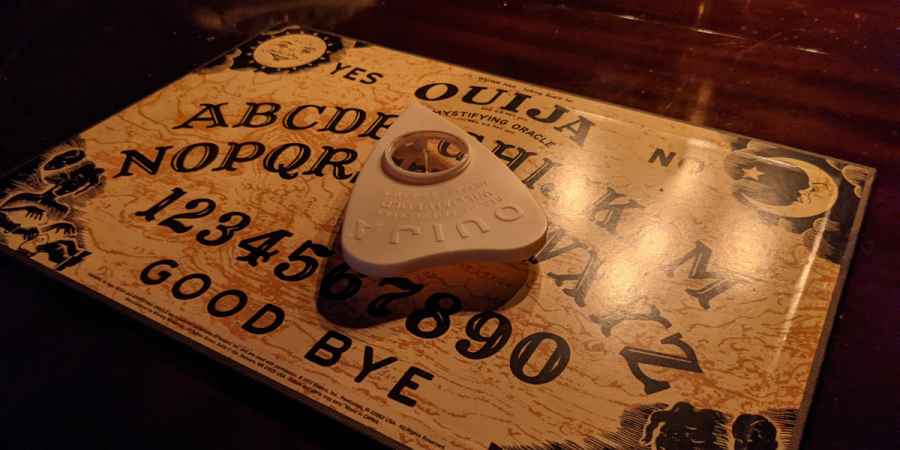 One of the most convenient things about ghost hunts being conducted in the dark is that I'm able to roll my eyes unnoticed when the methods used stray into questionable territory.
There's certain suggestions, methods and phrases that trigger an eye roll. Some are quite common like "it feels like it's got darker in here" despite being in a sealed room with very little light. Or "shall we do a human pendulum?"
But the one that never fails to make my eyeballs spin in their sockets is the phrase "oh, the spirits are messing with us now."
This gets used a lot on ghost hunts in situations where the ghost hunters get unexpected results. For example a Ouija board spells out gobbledygook or a male spirit says its name is Mary via a piece of ghost hunting equipment.
The reason this phrase irritates me so much is because the investigator is presented with something the debunks their method but instead of realising or acknowledging this, they assign credibility to it.
Here's an example. Say you're part of a group of people using a Ouija board. You ask "were you a soldier?" and the planchette slides to 'yes', so you ask "can you tell us your name?" and the pointer darts across the board, letter to letter, to spell out the name "William." Great, a promising start.
You then ask "can you tell us which regiment you were in?" and the planchette tentatively slides to Z, then J, then a Q... B, G and R.
Often, someone eventually says, "the spirit is messing with us now," implying that the inability to spell the name of the regiment is a sign of tomfoolery on the part of the spirit.
Of course, it's not. What this should really tell a ghost hunter is that their methodology is flawed or at the least you've failed to make contact. The board failed to spell out a regiment because the participants didn't collectively know the name of any regiments to spell out. The gobbledygook doesn't confirm the presence of a mischievous spirit, it confirms that a Ouija board can at times, if not all the time, spell out words through the subconscious movements of those using it.
It's not just Ouija boards when this flimsy excuse is used to let the spooks off the hook. I've heard it used during various paranormal experiments, including those using spirit boxes and flashlight sessions.
This technique involves laying torches on the floor and encouraging any spirits that might be present to communicate using them by turning them on and off. Often this involves having three flashlights, each with a different coloured filter, red, green and blue.
Ghost hunters then call out and say something like "if someone is here can you turn on/off all of the lights?" Or, "can you make the green light flash" and "can you turn the red light on."
Eventually, the spirits might acknowledge these requests and actually turn on the red light when asked, or turn off the green light, but most of the requests to manipulate the lights go unanswered.
Whenever I have seen this method used, the way in which the lights turn on and off is totally random. Sometimes the lights did turned on or off under the instruction of the ghost hunters, but other times it did the exact opposite. When this happens, the person calling out uses those grating words, "they're just messing with us now."
If you call out and ask for the red light to be turned on ten times and nothing happens until the tenth time, when the red light stays off while the green and blue lights come on, then this is again proof that you've failed to contact a ghost, not that ghosts are mischievous.
Of course it's possible that you might have encountered a mischievous spirit, but if this happens often then you have to question the methods being used. If you can't trust every response you get through these methods every time, then how can you put your faith in any single response? Frequent false results make every other result unreliable.
So, stop making excuses for ghosts and passing the buck. They're not messing with you, you're doing it wrong.
Tags:
ghost huntingparanormal