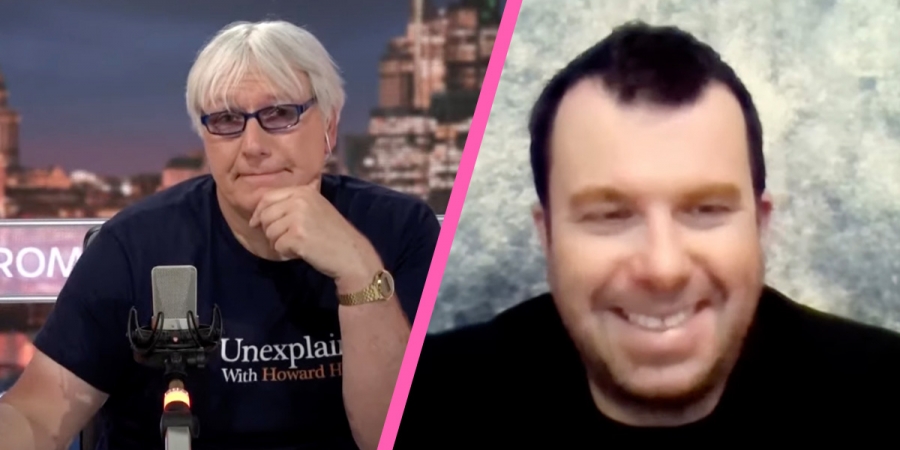 Photo: © TalkTV
At the weekend, Howard Hughes' long-running paranormal radio talk show, 'The Unexplained', made the move to becoming a visual show, which is now simulcast on the radio and television. Joining Howard for his first televised episode was parapsychologist, Ciarán O'Keeffe.
For the last six years, Howard has presented 'The Unexplained', a radio show in which he discusses ghosts, the paranormal and conspiracies on Talk Radio.
Following last week's launch of the new television channel, TalkTV, Howard has now gone visual. You can now not only listen to 'The Unexplained' every Sunday night at 10pm on Talk Radio, but you can also watch Howard live on digital TV and online.
Howard welcomed viewers to "the most eye-opening show on the air anywhere," which is also available as a weekly podcast. Howard said in his opening monologue, "this show's a total mix of pure science, weird science, hard science and pure paranormality every week, the way that it always was in six years on the radio, now on TV."
The show started as it normally does, with a recap of some of the biggest stories from the paranormal world from the last seven days, but later Howard was joined by Ciarán to talk about a survey that had made the news this week.
If you missed the chat live, you can watch it back in full in the recording of Sunday night's show below. Ciarán joins the host at around the 36 minute mark.
According to the poll being discussed, 42% of people believe loved ones who have passed away are still able to contact and guide us from the other side. Statistically speaking, that means 7.5 million people in the country believe that they have been helped from the other side. Howard says, "that's a tremendous proportion, that's a tenth, roughly, of the population isn't it?"
Ciarán agrees, "it is a tremendous proportion," but added, "if you look you look back at surveys, even over the last 20 years, actually this is nothing new in terms of the percentage, so it's not as though we're seeing necessarily an increase, but it is showing a huge percentage that believe in this."
The parapsychologist continued, "what was interesting from the survey is the number of people, we had 52% of people in that survey who continue to talk to loved ones as if they were still there, so that and the fact that people are talking about signs kind of gives us a hint to the psychology of what's going on and a possible explanation."
Howard asks, "does it give us a hint that there might be something, that clearly these people believe there is, beyond this three-dimensional reality that we see and experience before us now?"
Ciarán answered, "the fact that we have these numbers of people having these experiences gives a weight to the experiences." He added, "we can't just dismiss everybody as being fraudulent or a hallucination, there must be something else going on, but the problem for me is that there's so much psychology and so much environmental explanations that are possible here that you know there could be something quite simple going on."
Howard is a little less skeptical, he said, "there are a number of cases, and we hear about them all the time, where you think 'how could that have happened?' You know, I've had things that have happened to me. There are cases are there not where we're into a grey area, where it might be something beyond this hard reality?"
"Yeah, absolutely," Ciarán responded, "if you speak to any of my colleagues within mainstream psychology they will talk about those natural explanations." But he confessed, "absolutely there is this grey area, and I think the grey area for me is the most fascinating part of it."
Ciarán finished up the chat by saying, "I'm happy to be persuaded. I'm very careful about this causal intentional relationship that a lot of us had between you know things that happen and then we attribute that to something supernatural, but I've been in locations. As well as being a scientist, I'm a ghostbuster as well, so I've been in haunted locations where I felt spooked, and I wish there was a better word for it. I'm aware of some of the environmental explanations, but at that point where it happened, I genuinely felt spooked."
Tags:
paranormaltopicalradio