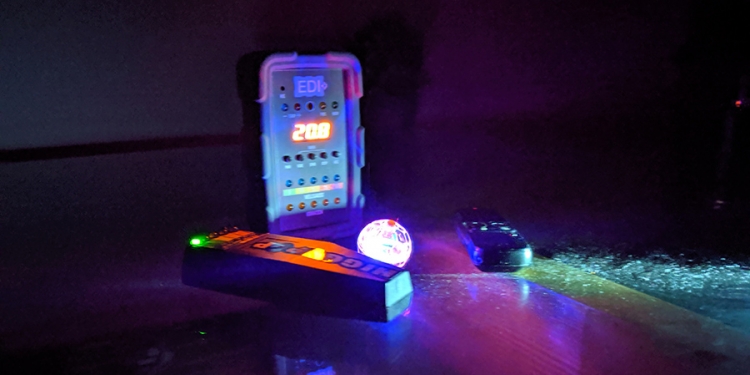 I've embarked on a lot of ghost hunts now, and while I'm not much of a believer in the ability that paranormal gadgets can detect ghosts, I do use them during investigations. During one investigation at a medieval castle in the midlands, it dawned on me that really if I'm going to use these devices, I should give them a proper test in a controlled environment to see how they perform without the potential of ghosts being near by.
With Halloween approaching it seemed like the perfect time to try this out. I decided to conduct my control investigation at home. I've lived there for three years, the building itself is about ten years old and I have absolutely no reason to think that it is haunted.
I wanted to make this a fair comparison to a real ghost hunt, so I turned off all the lights and the heating, I put my phone on to flight mode so that it wouldn't interfere with any of the gadgets - this is something I would also do on an investigation. I set aside three hours for this investigation. Normally on a public ghost hunting event you're taken to two or three different locations in a building for about an hour at a time.
Now in total darkness and armed with my ghost hunting kit, I began my investigation... 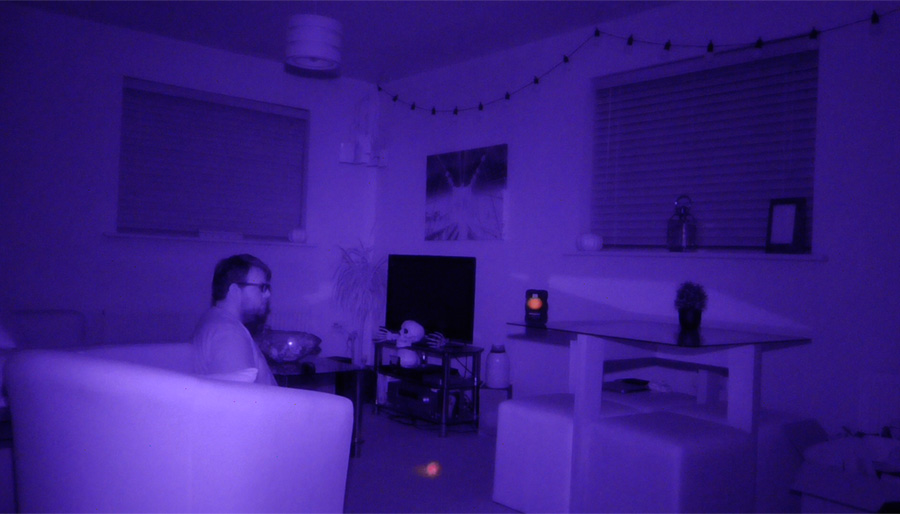 I started in the living room. I decided to sit on the floor, because I didn't want to be too comfortable. If I was sat on the sofa I might fall asleep in the dark, plus I wanted to recreate the discomfort of a ghost hunt. Perhaps being stood around or sat on the floor in the dark heightens our senses.
I was armed with an EDI+ meter, which is a sort of paranormal multi-tool, it has a vibration sensor and measures changes in the atmosphere, such as temperature, humidity, pressure and electromagnetic field strength. That was placed on the dining table. Then on the coffee table I had a K-II meter, a popular ghost hunting device that lights up if there's a change in the electromagnetic field strength around it, and on the floor I placed a cat toy - a little plastic ball which lights up if it's moved.
I began how I would on any ghost hunt, by calling out to the spirits. I asked any spirit present to show me a sign they were with me and encouraged them to interact with the ghost hunting equipment scatted around the room. I loudly and clearly said things like:
"If there's anyone here with me who wants to make their presence known, can you make a sign to show me you're here."
"We've been living together for a while now, I'm sorry if you've been trying to communicate with me, tonight I am listening if you have a message for me."
"If you can, move towards one of the lights around the room. If you get close it will change colour and give me a sign you are here."
I quite relentlessly called out for about 15 minutes and experienced absolutely nothing, which I would expect as I live in a house that I don't think is haunted. None of the ghost hunting gadgets triggered and it was silent. There were actually less natural knocks and creeks than usual in the living room and as I approached the 20 minute mark I started to doubt whether there was any point doing this experiment.
Then something happened. Seconds after I'd said "if you're here, can you come towards this box in front of me," the EDI+ triggered. The blue and the yellow light flash simultaneously which indicates a drop in air pressure. You might be wondering what this means, well... it probably just means the air pressure had dropped, but on a ghost hunt this is often taken as a sign of intelligent spirit communication - especially as it happened a few times.
I asked the spirits to interact with the meter five times, and each time after I'd finished speaking, the pressure light lit up. So, I then asked if they could give me a clearer sign that they were with me by doing the same with the K-II meter on the coffee table.
Thinking about it now, this method was a little flawed because the EMF lights on the EDI+ weren't flashing, just the air pressure light. So if a spirit was interacting with the EDI+, it clearly had no electromagnetic properties and therefore wouldn't trigger the K-II anyway - but still, I tried it and failed to get any response. I also encouraged the spirit to push the cat toy and make it flash - this didn't work either.
The vigil then quietened down a bit, but towards the end of the hour-long stake out I started to hear a lot of very loud clicks and tapping sounds. As it happens, I know exactly what these sounds are. It's just the fridge's compressor kicking in and the kitchen is situated at the far end of the living room.
Although these sounds weren't paranormal in nature, it's easy to think why someone on a ghost hunt might find these noises odd when in a location where they're not familiar with its natural sounds. 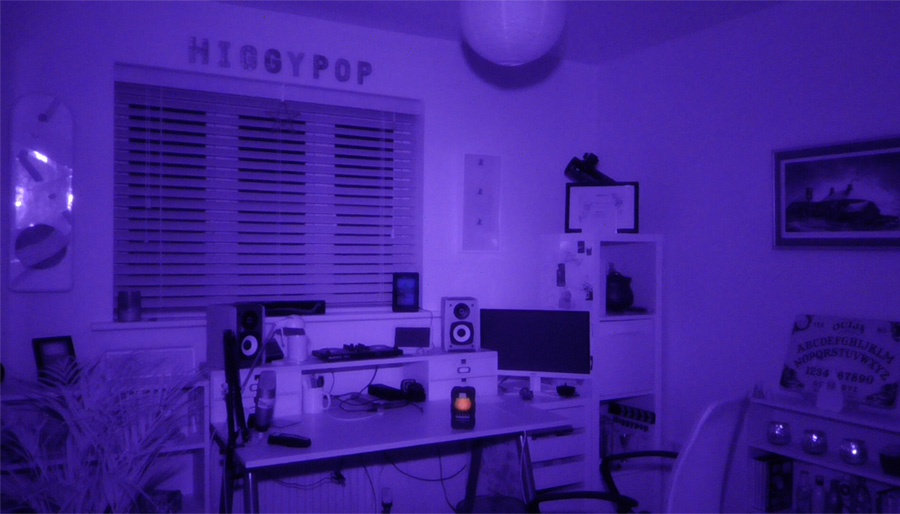 After a short break, which sadly didn't involve any of the usual snacks you'd get on a public ghost hunting event, I resumed my investigation, this time in the office AKA Higgypop HQ.
I was armed with the same kit, the cat ball was on a shelf above the desk, and the EDI+ and K-II meters were at either end of the desk. I sat on the floor in the dark again, leaning against one of the walls. The house was starting to get cold now as it was approaching midnight in late October and the central heating had been off for well over an hour.
I expected the office to be quieter. It only has one external wall which is at the back of the house and doesn't adjoin next door at all. I wasn't wrong, the room was deadly quiet. There was not a sound for the whole hour despite my attempts to call out to any spirits.
The ghost hunting gadgets didn't trigger once and there was not a single knock or bang. This could have been because the air pressure and humidity is more stable in this room, there's no boiler, sink, fridge, freezer or much else electronic - nothing that was switched on anyway. 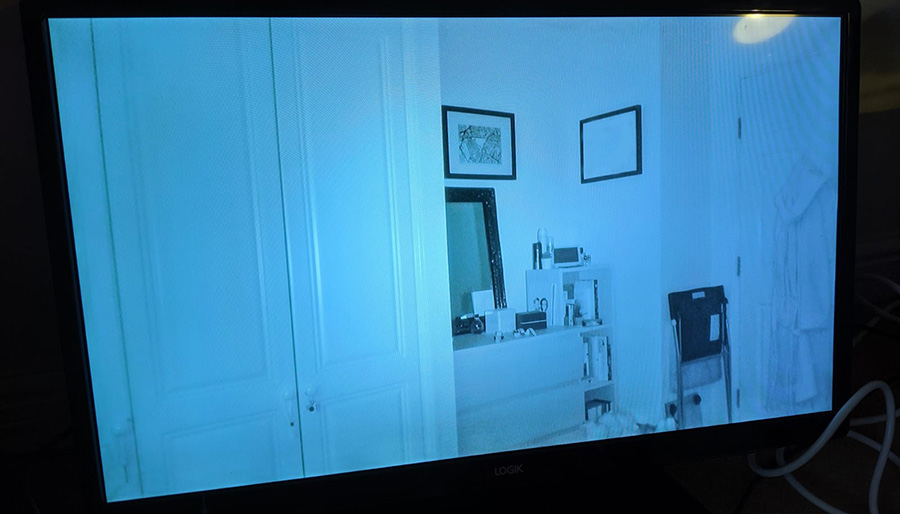 Perhaps the most interesting part of the experiment was the third hour. I spent this time sat watching a live camera being streamed from another room in the house. I had the volume turned up high and gave it my full attention. As I was using a camera with infrared night vision, it did capture a few orbs, but what was really bizarre were the sounds.
Because the camera was in relative silence, it tried to compensate by boosting the microphone level and as a result picks up just about any sound, no matter how distant. When watching and listening to this video feed at full volume the human ear hears things you probably wouldn't be able to otherwise.
Over the 60 minutes I heard everything imaginable including laughing, voices, what sounded like a sheep, squeaks, whistles, knocks, bangs, pings, tings and creaks. I couldn't hear any of these sounds from the living room. The sounds were pretty relentless and even the slightest movement I made two rooms away was picked up and amplified by the camera on the live feed.

The first 20 minutes of my time in the living room was very slow, but the rest of the hour actually flew past and I did get what some might consider to be evidence of ghostly contact even though my house is not haunted.
Later in the office things were much quieter. I might not have lasted the whole hour if it hadn't had been for the little bit of activity I'd had in the first vigil in the living room. I remembered how nothing had happened at first and how things could happen at any moment - but it didn't. Nothing happened at all.
Overall, if my ghost hunting equipment is to be believed then my non-haunted house is more paranormally active than some allegedly very haunted locations that I have investigated. During my two-hour investigation - especially the first part - I witnessed more activity than I have had at times at Drakelow Tunnels and Hereford Shire Hall, to name just two.
Of course, as there is no reason to believe that my house is haunted and based on the fact that nothing remotely paranormal ever happens here, I have to conclude that the times that the ghost hunting gadgets triggered were false positives.
Of the devices I used it was the EDI+ meter which was the most prone to giving false alerts, each occasion was due to air pressure changes. The K-II meter didn't trigger once during the investigation even though there are countless wireless devices running in my "smart home".
But it wasn't just the gadgets that gave false positives. Although the knocks I heard are easy to explain and debunk, in an unfamiliar location these sounds could have easily been interpreted as proof of the paranormal.
The results from the camera were also very interesting and just goes to show how unreliable a camera can be in a silent location. Distant sounds coming from outside the property sounded like they were inside. Naturally occurring minor insignificant knocks and bangs from around the house sounded like they were close to the camera.
The three hours were quite dull, but ghost hunts can often be boring too and involve nothing more than sitting around. Despite this it was actually a very interesting and useful experience that's given me a new insight in to how my tools of the trade and even my senses work when there are no ghosts around to interact with them.
Tags:
paranormalghost huntsghost hunting