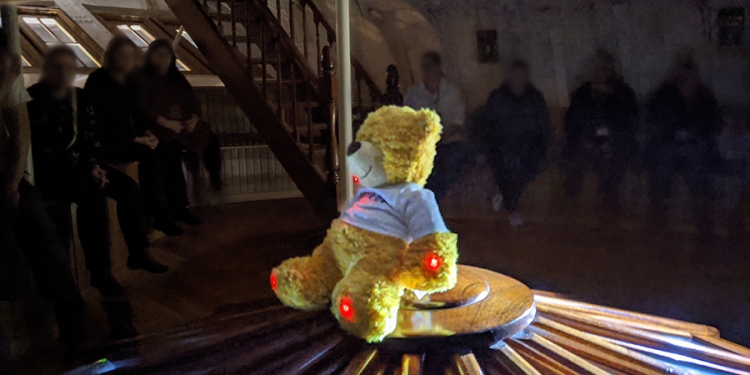 This is our ghost hunting stuffed toy. It looks like an ordinary teddy bear, but this plush toy hides a secret inside. Get too close you and you'll find out when the bear suddenly lights up.
That's exactly what this bear is supposed to do when used on a ghost hunt. If something enters the bear's detection field it beeps and lights up. The idea is that a child spirit might be tempted to approach the toy and its presence would cause the device to trigger.
This bear was custom-made for us and we asked our readers on Facebook to name the bear. The name we liked the best and went with was Poppy, for obvious reasons.
The electronics hidden inside the bear is a simple REM-Pod circuit. The circuit radiates an electromagnetic field through a cable running vertically through the bear that acts as an antenna. If something conductive enters the field it causes the device to trigger. The closer the object gets to the bear the higher the pitch of the tone it emits and the more rapid the red LED lights hidden over the bear's body flash.
The good thing about having a REM-Pod hidden in a bear is that they are quite a robust ghost hunting gadget. Devices like EMF meters, which detect spikes and fluctuations in the ambient electromagnetic field, are pretty flaky. They weren't originally designed to detect ghosts. They weren't originally used by ghost hunters to detect ghosts, merely to check for the presence of manmade electromagnetic fields which could cause people to experience haunting-like phenomenon. There's no real reason to believe or assume they work. Whereas a REM-Pod and a REM bear are much more likely to work and will trigger if something enters its field.
Of course, whether a ghost can manifest a conductive physical form that can trigger the device is another question, but the science is at least a little more sound.
I've used the bear on a few investigations and have to say, so far it has given us no results whatsoever. This might sound bad, but this doesn't mean the device doesn't work. I personally think that the phenomenon that gives rise to reports of hauntings is very rare and a ghost hunting gadget shouldn't be constantly triggering throughout every investigation.
This shows that the REM bear isn't as susceptible to false positives as other ghost hunting gadgets. So, if the bear does light up during a ghost hunt, then it's more likely that this is because something weird is going on.
A REM bear is essentially an electronic trigger object, but a trigger object is any item which can be left around a haunted location which a ghost or spirit can interact with. It could be making a pendulum swing, spinning the needle on the compass, or moving an old coin or a ball.
The reason a bear works so well as a trigger object is because a toy is non-threatening and child-friendly. It's also an advantage that it doesn't look like a regular ghost hunting gadget, as these might appear quite strange and alien to a spirit from the distant past.
Not every type of trigger object works well in every location. For example a bunch of keys might work well in an old prison, but a child's toy might not have the same appeal to any spirits trapped there. However, if used in the right location where child spirits are said to haunt, then a REM bear is the perfect trigger object and is great for helping to track down the ghosts of children.
When using a bear like this, you should always make sure it is placed on solid, flat surfaces, ideally in a location where people won't need to walk past it and away from electrical equipment and sources of transmission that might interfere with it.
The bear can be used in a couple of ways. Either placed in a location and left with a static locked off video camera on it. The room can then be locked and remain empty and after the investigation you can review the video footage to see if the bear triggered at any point.
The other approach is to place the bear in the area where you're conducting a vigil and actively call out to any spirits who might be present and encourage the spirits to approach, touch or play with the bear to see if this will elicit a response.
Add A Comment
Tags:
paranormalghost huntingrem pod