How To Correctly Use An Infrared Thermometer On A Ghost Hunt 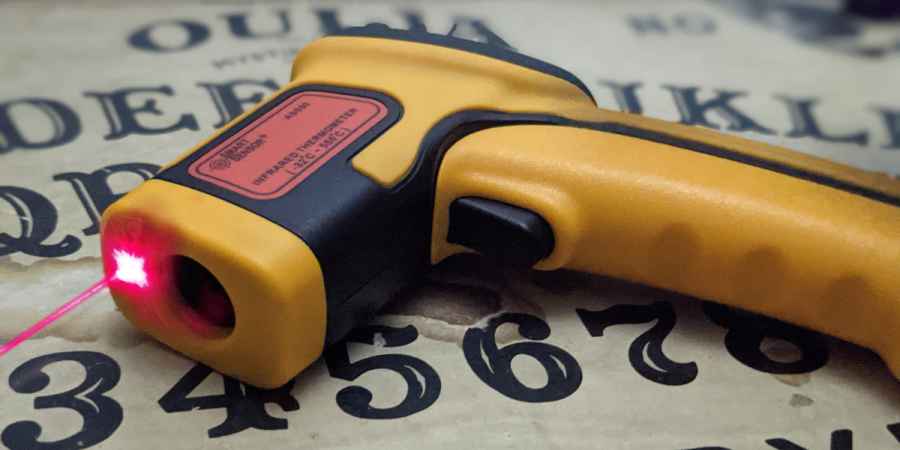 If you use a point and click digital infrared thermometer on a ghost hunt you're probably using it incorrectly, there's a few quirks and common misconceptions that any paranormal investigators should know about.
These type of thermometers are the most common type used to look for the temperature anomalies associated with hauntings on a paranormal investigation. They're easy to use during an investigation because they don't require any contact with the object they're measuring the temperature of, you simply point the device and press the trigger.
Infrared thermometers measure the surface temperature of an object. The unit's optics sense emitted, reflected, and transmitted heat energy, which is collected and focused onto a detector, which translates into a temperature reading on the device's display.
If you've ever used one of these thermometers on a ghost hunt, there's a good chance you're not using it correctly. Here's not one, but five reasons why.

They're Ineffective Over Distance 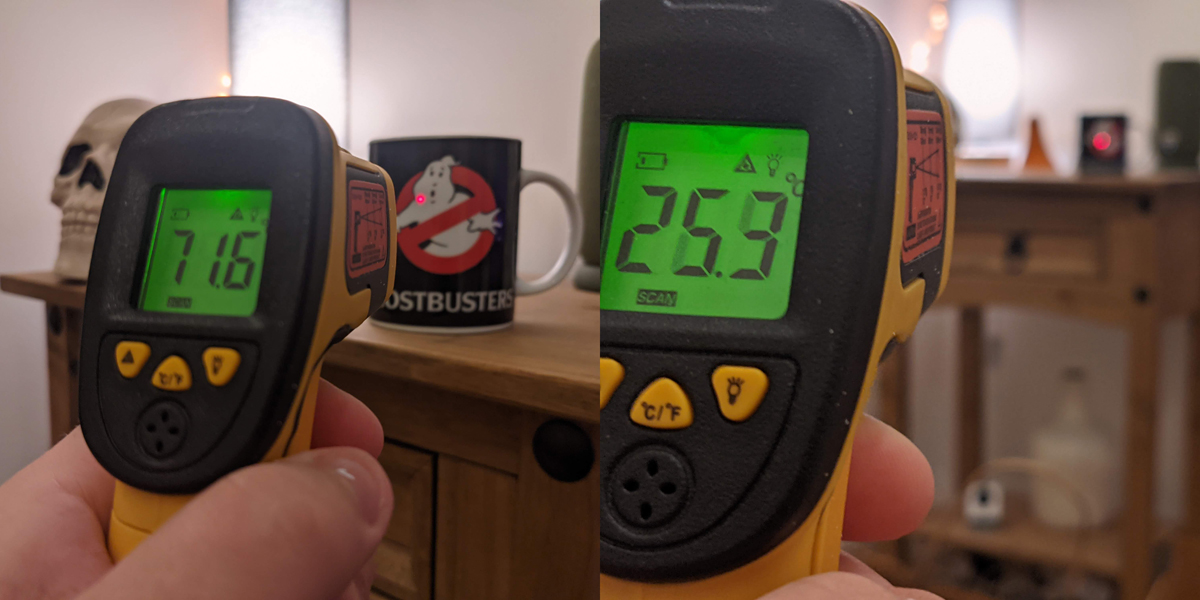 If you've ever stood at one side of a room, even a relatively small one, and aimed your thermometer at an object on the other side of the room, then you're wasting your time. This is because most commercially available infrared thermometers have a distance-to-sight ratio of 12:1. This means that if you are holding the gun 12cm from an object then the target area that the gun is looking at is 1cm in diameter. As you move the gun further away the size of the target area increases. When the device is 1 meter away from the object, the target area is 8cm.

As you can see in the example above, when the gun is held 12cm away from the steaming mug of coffee it has a target diameter of 1cm which gives an accurate reading of 71.6°C, but at 3 meters distance the target area has a diameter of 25cm, this is far bigger than the mug so the temperature ends up being an average of the mug and the cooler objects around it, giving a reading of just 25.3°C. Note that the red laser targeting dot is in roughly the same position on the mug in both cases. 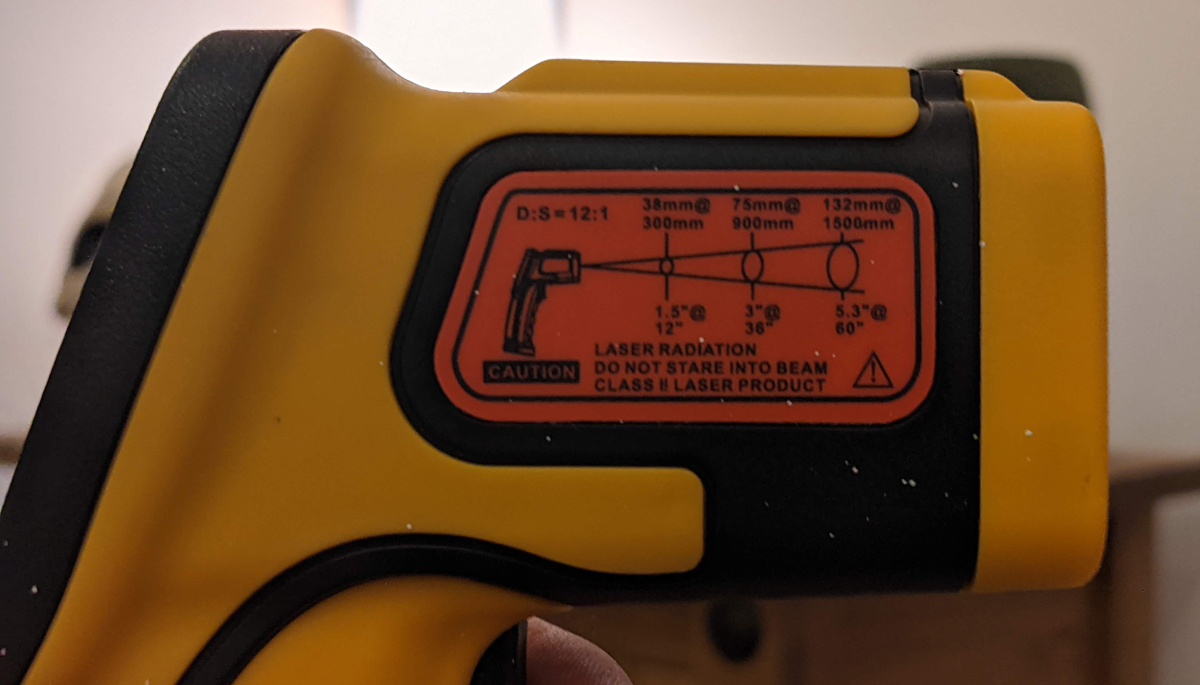 Many models of infrared thermometers tell you about this important limitation on the side of the gun, as well as in the operation manual, the problem is it's hard to read the label in the dark.

When using this sort of temperature gun, make sure that the object is larger than the unit's target diameter. The smaller the object, the closer you should be to it.

Turning The Laser On/Off Doesn't Change The Field Of View 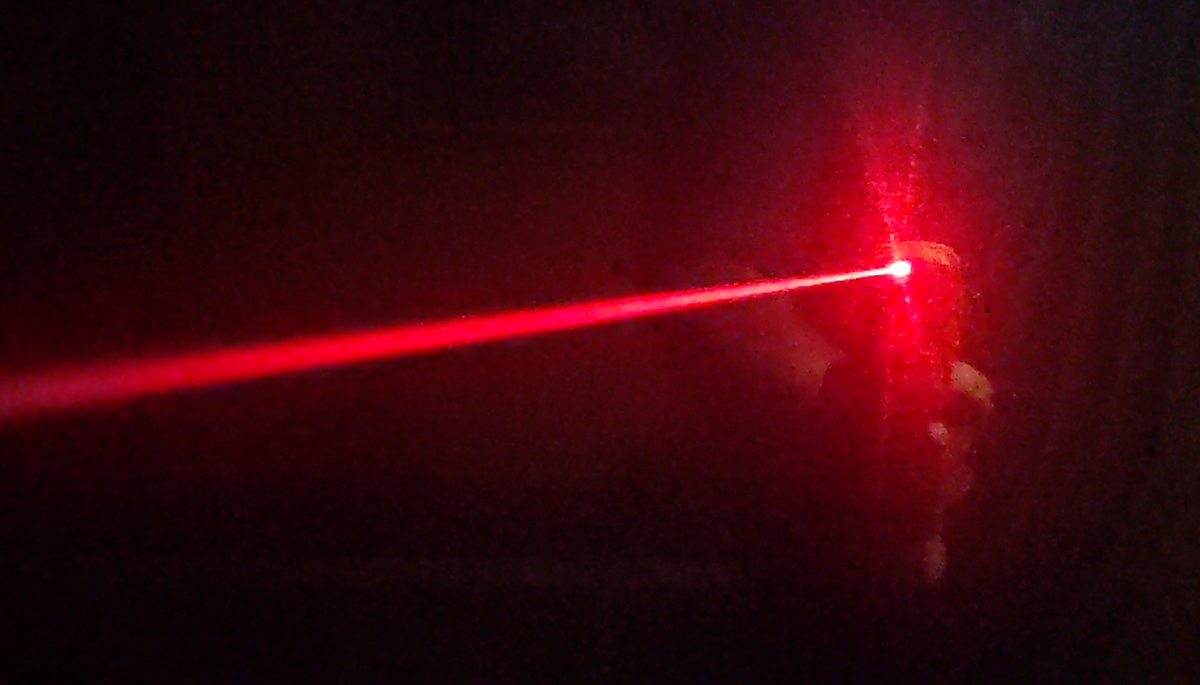 Another misconception that's sometimes passed off as fact is that turning the gun's laser off alters its field of view. Some infrared thermometers have a button that allows you to switch the red laser on or off. The misconception is that when the red laser pointer is on that this is the gun's target, when it is turned off the gun operates with a wider field of view - this is simply not the case.

The laser is used for aiming purposes only. All this option does is simply turn on or off the targeting laser, which produces a red laser dot to help you aim the gun. Whether the laser is on or off, the device functions in exactly the same way and its field of view is exactly as described above in both cases, with a distance-to-sight ratio of about 12:1. 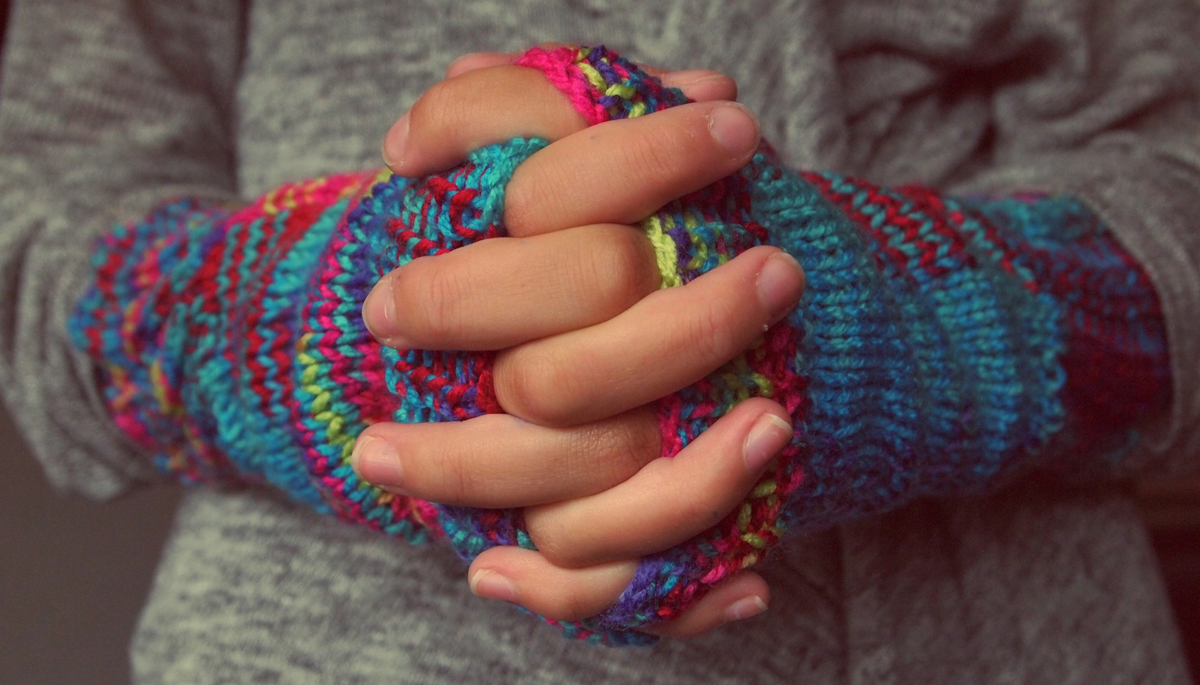 Therefore, if you point the thermometer gun at someone it will simply tell you the temperature of their body and the objects around them.

A better approach would be to point the device at the area of the floor they are stood on to see if whatever is creating the temperature drop is cooling the floor too. The cold air may also cool the floor below it.

They Don't Work On All Surfaces 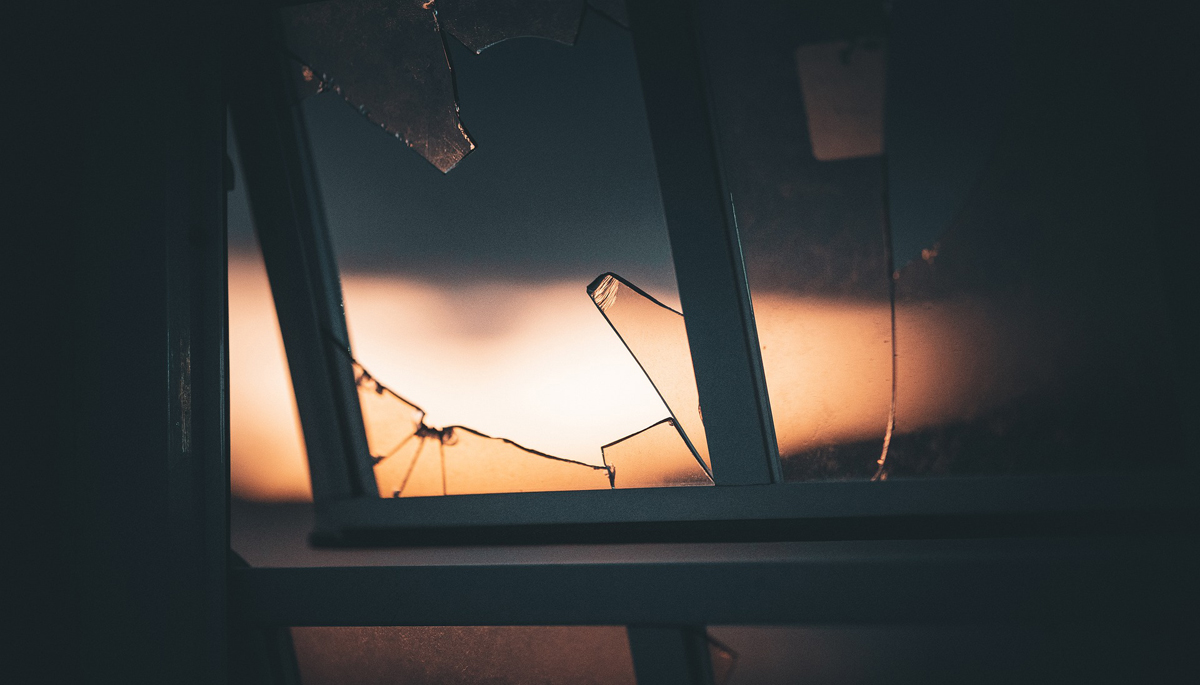 You might not realise, but infrared thermometers don't work accurately on any surface. They are not recommended for measuring objects with shiny or polished metal surfaces and will give an inaccurate reading. If you need to measure such a surface, it's advised to cover the surface to be measured with black tape. Allow time for the tape to reach the same temperature as the material underneath it and then measure the temperature of the tape.

It Needs To Settle In Its Surroundings 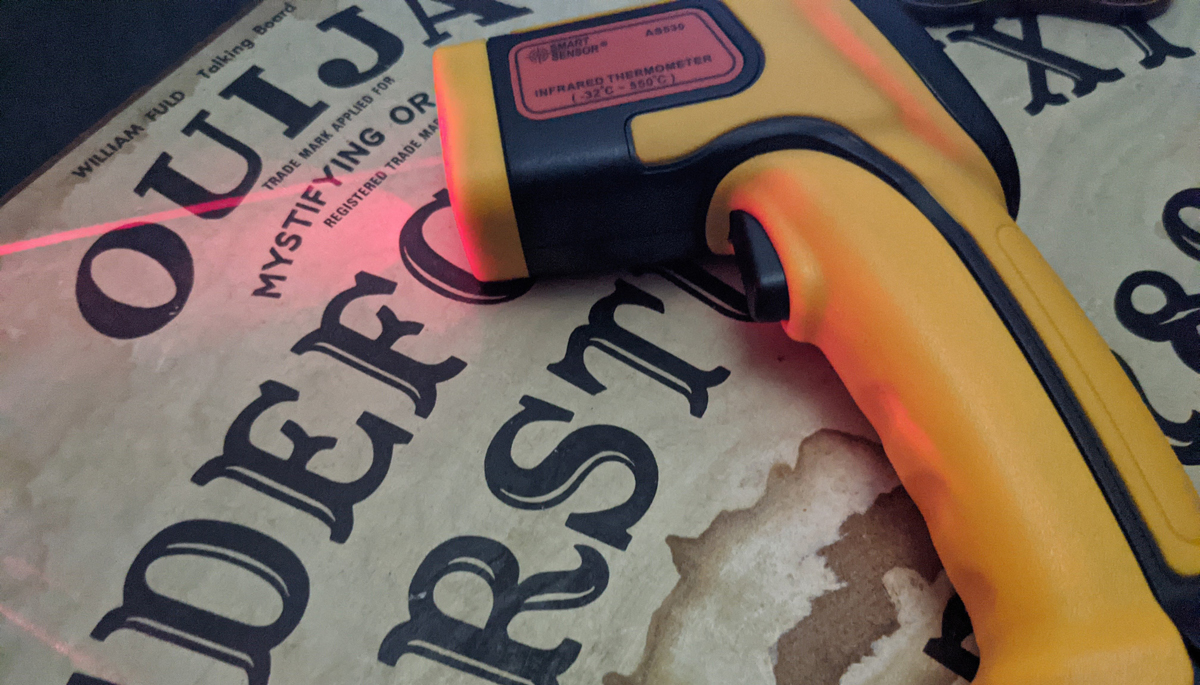 How To Correctly Use An Infrared Thermometer 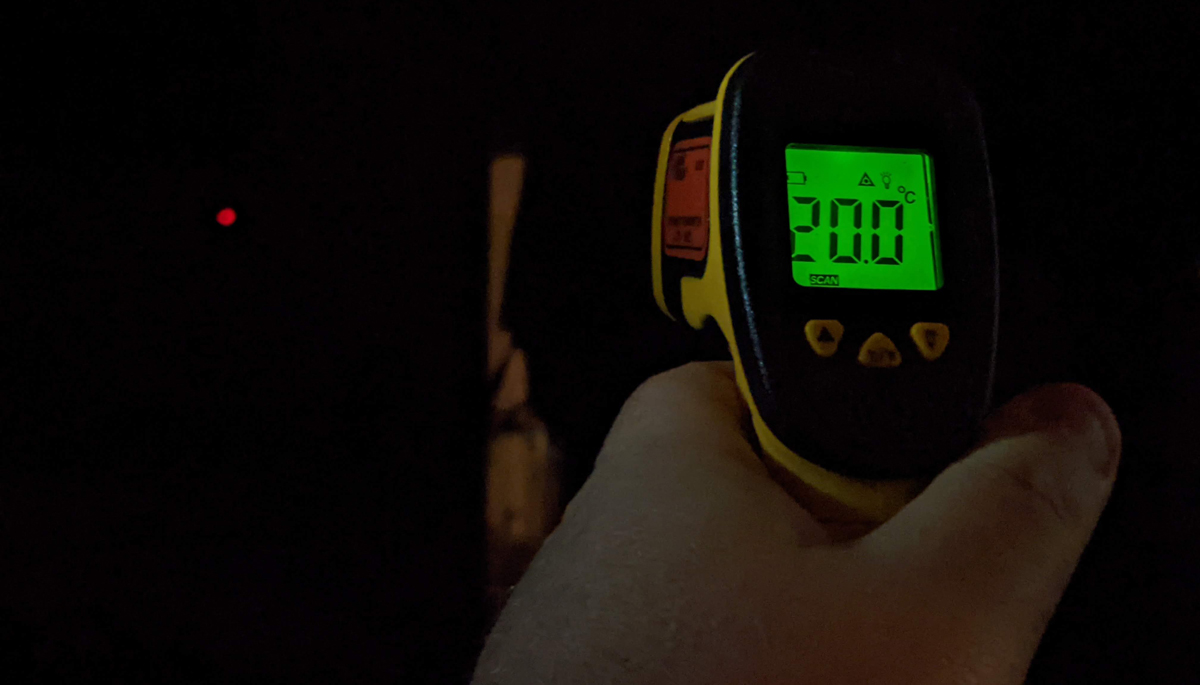 If you are aware of these five pitfalls, then an infrared thermometer can be very accurate and have a valid role on a ghost hunt.

There are a few valid uses, such as to find the temperature of an object that's been thrown or moved. You can use the device up close to the object that moved to try to detect any unusual temperature variants. For example, whether the object is warmer or colder than its surroundings. When using the meter for this purpose, hold it by its handle and point the gun's IR sensor towards the object you want to measure the temperature of from a distance of around 5-15cm.

You can also use it to find a hot spot or cold spot on an object's surface or a wall. To do this, aim the thermometer outside the area of interest, then scan across with an up-and-down motion until you locate a spot with a significant temperature differential.