The BBC have dropped a trailer for 'The Witchfinder' giving comedy fan their first taste of a new witchcraft series starring Daisy May Cooper and Tim Key. 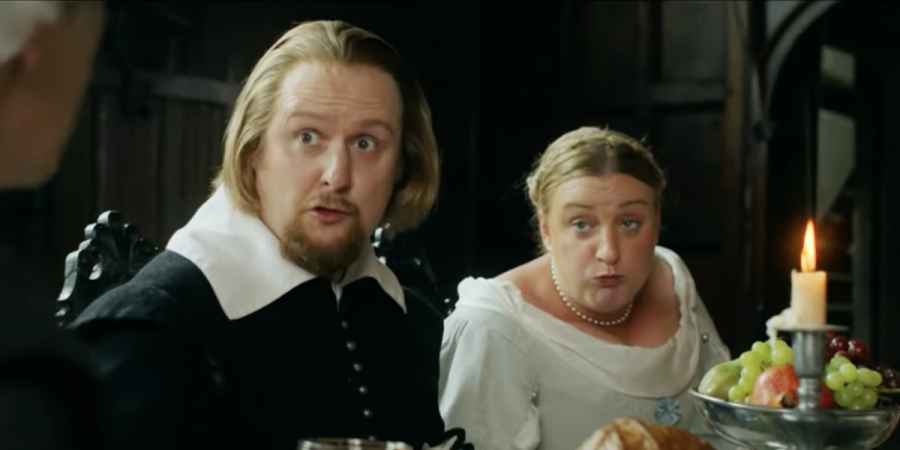 Photo: © BBC
Daisy May Cooper is set to star alongside Tim Key in a new BBC Two comedy series that will take you on a road trip across England at a time before roads even existed, a time when the country was gripped by civil war, famine, plague and of course witchcraft.
'The Witchfinder' follows a failing witchfinder, played by Tim Key, and takes us back to the year of our Lord 1647 when the fear of witchcraft is rife.
Puritanical Christianity, deep-seated superstition and a willingness to scapegoat outsiders have created a tinderbox of suspicion in which few are safe. In this environment, witch-finding has flourished, as self-appointed witch experts achieve hero status by investigating accusations of witchery and extracting confessions.
Being transported across 1640s East Anglia is a suspected witch, played by Daisy May Cooper. She's on her way to a trial that could change the witchfinder's fortunes forever, but the captive is the worst possible travel companion: an inquisitive, uncouth woman whose ability to prick his pomposity and ask uncomfortable questions turns a straightforward journey into a life-changing ordeal.
The series is created by Neil and Rob Gibbons, the writers and directors of 'This Time With Alan Partridge', which also stars Tim Key.
Tim said, "I'm delighted to be working with the mercurially talented Gibbons brothers again, particularly on something set in 17th century England - which they seem to have a fairly loose grasp of - and I'm excited to do a road trip but on horses (I can't ride a horse). I love the idea of Daisy May Cooper being a pissed-off witch anyway so the fact that I’m playing her antagonist is the icing on the cake. Can’t wait to saddle up."
Daisy is best known as Kerry Mucklow in the cult BBC Three comedy show, 'This Country'. She said, "I cannot wait to be starring in 'The Witchfinder' with the absolutely brilliant Tim Key. I've always wanted to be a witch, my mother says I've got the nose and chin hair for it. I dabbled a bit in witchcraft when I was in my teens and ended up accidentally inviting an incubus into my house. He was an absolute prick."
The thing is, Daisy might not be joking about the incubus, she's actually no stranger to the world of the weird. Back in 2020 she followed in the footsteps of countless other paranormal investigators and braved a night at the infamous Ancient Ram Inn, one of the most haunted properties in the UK.
Last year in an interview with Chortle, Daisy confessed that she "a hundred, thousand percent" believes in ghosts and would love the opportunity to appear in her own ghost busting show. She said, "I really want to train to be an exorcist and just go out on the road rescuing people and clearing them of all of their demons. Sky have to make it happen!"
The Gloucestershire-born actress is so dedicated to finding proof of the paranormal that she's even bought her own ghost hunting gadgets, "I just totally believe in them and I actually bought my ghost equipment to the show because we're in quite an old building. So, in between filming, I'm just constantly on the lookout for ghosts." However, she admits she's not yet found any spooks on set.
The six-part series will air on BBC Two and iPlayer later this year. Kate Daughton, Head of Comedy Commissioning said, "In 'The Witchfinder', the Gibbons brothers have managed to create a timelessly compelling odd couple, forced together on a journey through one of the most baffling moments of English history. Tim Key and Daisy May Cooper are two of the UK's funniest people and I can’t wait to see them tackle gender politics, male privilege and be... on horseback."

The Witchfinder is imminent! Excited to share BBC’s trail here.

Join a failing witchfinder and a suspected witch on a hilarious madcap road-trip across 1647 England.