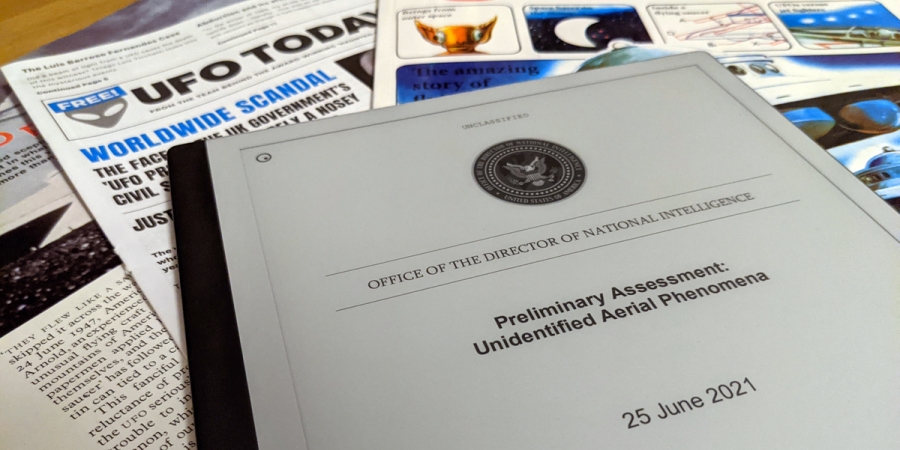 At the start of the year, President Trump signed an emergency relief bill committing $2.3 trillion to help the country recover from the coronavirus outbreak.
The 5,600-page document contained a few linked requests, some of which weren't related to the COVID-19 pandemic, one of which was concerned with the intelligence agencies research of UFOs.
The document asked almost all of the US intelligence agencies to submit an unclassified report on all they know about unidentified flying objects to the Senate intelligence committee within 180 days, with details about the US government's task force researching Unidentified Aerial Phenomena (UAPs) - more commonly known as UFOs.
At the end of June, the highly anticipated report was made public and now we've had a few weeks to digest what was revealed, what exactly does the Pentagon's unclassified report tell us about UFOs and alien visitations to Earth?

What Did The Report Reveal?

The first thing to point out about the report, which is titled 'Preliminary Assessment: Unidentified Aerial Phenomena', is that it was put together by the Office of the Director of National Intelligence with input from various US government departments including the Air Force, FBI and Defense Advanced Research Projects Agency (DARPA).
In fact all together, 18 different government departments contributed to the report, which examined 144 UAP incidents from the past two decades, but despite all this, the report is only nine pages long. Meaning this is a very broad overview with no details of specific cases, whether the objects in question were ultimately identified or not.
It should also be noted that the report does not once mention the term extraterrestrial or alien, this means it also doesn't specifically rule out non-terrestrial causes for UAPs. In fact the report concludes that "a handful of UAPs appear to demonstrate advanced technology," although admittedly the number of these incidents is small, in just 18 incidents unusual movement patterns or flight characteristics were observed.
The report also clarifies, "in a limited number of incidents, UAP reportedly appeared to exhibit unusual flight characteristics. These observations could be the result of sensor errors, spoofing, or observer misperception and require additional rigorous analysis."
Perhaps the biggest revelation in the report is that the Department of Defense formed an Unidentified Aerial Phenomena Task Force (UAPTF), which shows that this unexplained phenomenon is taken seriously by government officials.
The report makes it clear that UAPs "pose a safety of flight issue and may pose a challenge to US national security." This potential national security threat is mainly due to the fact that most reports of UAPs seem to represent "physical objects," as the majority of the reports saw the object register across multiple sensors, rather than just visual observations.
These security concerns are mostly due to the risk that these reports suggest a possible increase in "airborne clutter". It lists some of the possible causes of this clutter as some very down-to-Earth things, including "birds, balloons, recreational unmanned aerial vehicles (UAV), or airborne debris like plastic bags."
Other natural causes offered included, "ice crystals, moisture, and thermal fluctuations that may register on some infrared and radar systems."
The report doesn't limit the threat posed by UAPs to natural causes though, stating that in some cases it may be technology that's posing the threat. However, this threat doesn't come from alien invaders from other worlds, its source is much closer to home.
The document suggests that foreign adversary might be encroaching on US airspace, "some UAP may be technologies deployed by China, Russia, another nation, or a non-governmental entity."
Another possible cause for UAP reports could be the US government's own classified projects. The report states, "some UAP observations could be attributable to developments and classified programs by US entities. We were unable to confirm, however, that these systems accounted for any of the UAP reports we collected."
The truth is, Unidentified Aerial Phenomena are just that, unidentified. The report doesn't offer any conclusive explanations or even attempt to debunk any specific incidents. This is perhaps due to the claim, "the limited amount of high-quality reporting on unidentified aerial phenomena (UAP) hampers our ability to draw firm conclusions about the nature or intent of UAP."

What Has The Response Been To The Report?

The report has generated a mix of feelings amongst ufologists. On one hand the report legitimises their field of research, which goes back decades.
The revelation that the US government formed a dedicated task force that has been investigating unexplained aerial sightings for the Department of Defence for more than a decade confirms their suspicions and has been seen as a form of validation by members of the UFO community.
On the other hand, the report has been met with disappointment, mostly due to its brevity at just nine pages long, and the fact that it offers no tantalising revelations that confirm that extraterrestrials have visited Earth. The report fails to confirm or deny this belief either way.
In a video posted by the website The Black Vault, John Greenewald Jr. said, "I truly thought that we weren't going to get much, and we didn't. But what really surprised me, was the fact that we didn't get really anything at all. Yes, there are nine pages, but I thought it would be a little bit lengthier."
He said his initial reaction to the report was, "I thought that they would go into detail and they really did not. They kept it very, very, very broad."
You can watch John's full reaction to the report below...

Where Can I Read The Full Report?

The best place to read the full nine-page report is on the Black Vault, a website that currently boasts an archive of more than two million pages on nearly every government secret imaginable, all of which have been obtained through the Freedom of Information Act or other means of accessing US government public information.
The Office of the Director of National Intelligence submitted their report, 'Preliminary Assessment: Unidentified Aerial Phenomena', to Congress on June 25, 2021. The full report is available on the Black Vault here.
Tags:
ufostopical