This article is more than five years old and was last updated in May 2022. 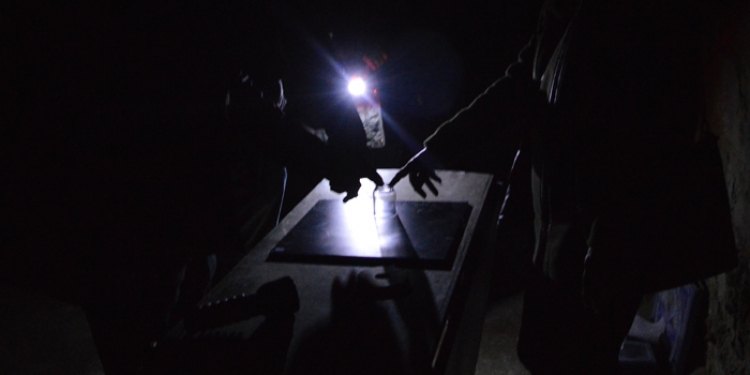 As a hardcore skeptic and extreme non-believer in the paranormal, you might wonder why I go on ghost hunts. In fact, why does any skeptic go ghost hunting?
Ghost stories date back to per-Christian times, spooky stories have been told around the fireplace for generations. Like any story, you don't need to believe it to enjoy it, fiction is a popular genre. So from the point of view of a skeptic ghost stories are nothing more than fiction but that doesn't take away from the quality of the stories.
A good ghost stories is often wrapped up in the history of the haunted house or location, there's factual elements and the parts which are fiction almost act as an extension to reality, it's like augmented reality through storytelling.
As far as I can tell, there are three types of skeptic:
Open minded skeptics
Debunkers
Respectful skeptic

On ghost hunts I've been to, the majority of the skeptics who attend seem to be open minded skeptics, they've never seen a ghost and they think there could be something in it, but they need evidence before the commit to being a believer in the paranormal. They're interested in the paranormal, they love ghost stories and they want to believe and it's for this reason they go on ghost hunts, to find that bit of proof that will convince them that it's all real.

There's a subset of skeptics who live to debunk, they think the paranormal is a waste of time, dangerous, and shouldn't be talked about. These are the type of people who make a point of watching ghost hunting shows just so they can point out the "fake" bits and discredit everything they see on screen. At a ghost hunt a debunker's only mission is to blanket disprove everything, luckily this type of skeptic doesn't tend to waste their time and money attending ghost hunts.

This is the category that I fall into and it really brings together the best of the previous two types of skeptics. Like the debunkers, I firmly don't believe in the paranormal. I think of myself as being rational. Even if a ghost appeared in front of my face I'd put it down to me seeing things, not proof of the spiritual plane.
But, this doesn't mean I dismiss and discredit everything like a debunker. Like the open minded skeptics, I also love the paranormal, it's something that interests me and I like to immerse myself in it. However, I don't believe I can ever be convinced like the open minded skeptics, I'm not looking for proof.
What I am looking for is the experience. I strongly believe that if someone sees a ghost, they've seen a ghost. What I mean by this is that if someone wakes up in the middle of the night and they see a dark shadowy figure at the end of their bed, then they have seen a ghost. It doesn't matter if their mind is playing tricks, if it's a trick of the light or whatever else, as far as that person is concerned, they know what it's like to see a ghost and that's something I can never experience.
I don't believe for a second that anyone who claims to have seen a ghost is actually experiencing the paranormal, but by getting closer to these people and understanding what they've seen it brings me closer to knowing what it would be like to see a ghost.
When on a ghost hunt, if I hear a bang I might be thinking "that's pipes expanding" but I don't feel a need to explain that or debunk it. I'm happy for the believers in the group to believe it's something supernatural because then as part of that group "we've" experienced something odd.
From a psychological point of view it's also interesting to try to understand why people experience what they do. Perhaps it's the "vibe" of a room which is created by eerie decor, oddly enclosed spaces, or strange layouts. Could mass hysteria be playing a part in what people are experiencing?
I also wonder how much of the hauntings are down to conditioning and suggestibility? I often notice that attendees of ghost hunts subconsciously pick up on historical cues around the building or follow a trend. On one ghost hunt I was at, a guest mentioned the ghost of an angry security guard and from that moment on every uneasy feeling experienced by one of the ghost hunters was attributed to the security guard.
Similarly on another ghost hunt a mischievous stable hand was mentioned early on in the night and his named then continued to be brought up throughout the night. However, some examples of subconscious conditioning are more more subtle, people picking up on names from portraits around the building or the name of rooms. These names often pop up later in the evening when communicating with spirits via ouija boards and similar techniques.
At the most recent ghost hunt I went on we used ouija boards and this turned out to be a really fascinating example of the psychological principles behind ouija. I also got to experience the glass moving across the board underneath my finger without any of the participants seemingly moving it.
I've used ouija boards before and never had any success, I put this down to me not being suggestible. So, initially I decided to stand back and observe but a few members of our group weren't keen on getting involved with the board so after a while I put my finger on the glass, along with two other members of the group.
I then went in to full Derren Brown mode. I used suggestible language and constantly called out to the "spirits" willing them to move the glass. I was fully aware that who I was actually speaking to was the other two participants and by using phrases like "concentrate hard on the letter you're thinking of an imagine the glass moving towards it" I was in fact trying to get the others the will the glass towards a specific letter and then the ideomotor effect does the rest.
I got quite into calling out in this way and it didn't take long for the glass to start sliding across the board albeit quite slowly. After slowly moving to "yes" to confirm there was a spirit present, we asked the spirit to spell out its name. We eventually got the letters F... I... N, Fin.
I was quite pleased to have experienced this, the motion of the across the board felt effortless and I'm sure all three of us using the board would swear we weren't moving it intentionally. I know I wasn't so I have no reason to doubt the other two. This is the closest I'm ever going to get to communicating with a ghost but now I kind of know how it feels.
Another reason I enjoy ghost hunts is due to my love of urban exploration and by attending these type of events I often get to explore some pretty interesting buildings and locations. I've been to creepy Freemason's halls and a disused underground wartime aircraft factory.
Tags:
paranormalghosts