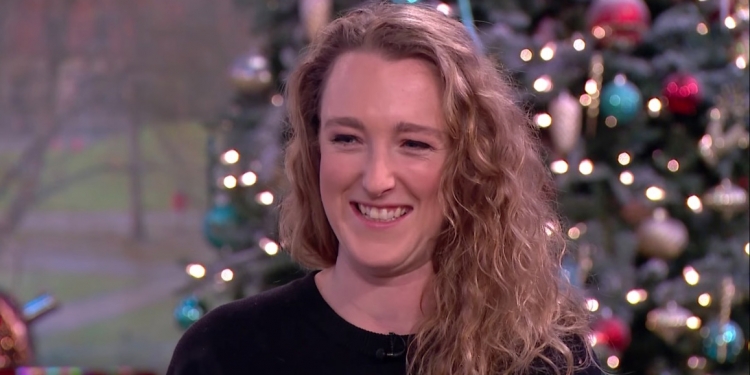 Photo: youtube.com
A woman from Bristol appeared on ITV's 'This Morning' to tell her unusual story of how she gave up men to have sex with ghosts.
Amethyst Realm, is a 27-year-old spiritual guidance counsellor, who says she'll "never go back to men" after having intimate encounters with no less than twenty different sprits in the last ten years.
She told 'This Morning' presenters Phillip Schofield and Holly Willoughby that it all started a decade ago when she started to tempt horny ghosts into her house by wearing lingerie while her fiancé was working away.
However, Amethyst did eventually get caught out, she said "he came home from work a day early and he says he saw the shape of a man through the spare room bedroom when he pulled up," it seems the spirit manifested into a physical form, revealing itself to him.
During the interview, Amethyst said that her spiritual encounters started off as "an energy" but later became "more physical and I started to feel pressure on my thighs, on my arms as well as breath on the back of my neck."
Amethyst says that spirits leave her more satisfied than actual living men, and since splitting up with her fiancé has had encounters with twenty ghosts and is now hoping to find that special spirit to settle down with.
Amethyst may be convinced of the existence of her lovers from beyond the grave, which she would have you believe is like a scene from the Patrick Swayze movie 'Ghost'. But Amethyst's description of her encounters with spirits, "pressure on my thighs, on my arms," sound more like a common phenomenon called sleep paralysis. She also said that first time it happened it was just as she was about to fall asleep, suggesting that she could well have been in a dream state, which is when sleep paralysis most often happens.
While you're sleeping, a your brain puts your body into lockdown, you are paralysed to prevent you from acting out your dreams, when this physiological mechanism fails people sleep walk. But occasionally people wake up and their body is still paralysed and they cannot move and often report the feeling of pressure on their body holding them down.
It's said that around 20% of people will experience the condition at some point in their lives. It's believed that women are more likely to experience sleep paralysis than men and that around 13% of those that do say that have experienced not fear, but a pleasurable, and even sexual episodes of sleep paralysis.
Tags:
paranormalghoststopicalbristolthis morningtelevision