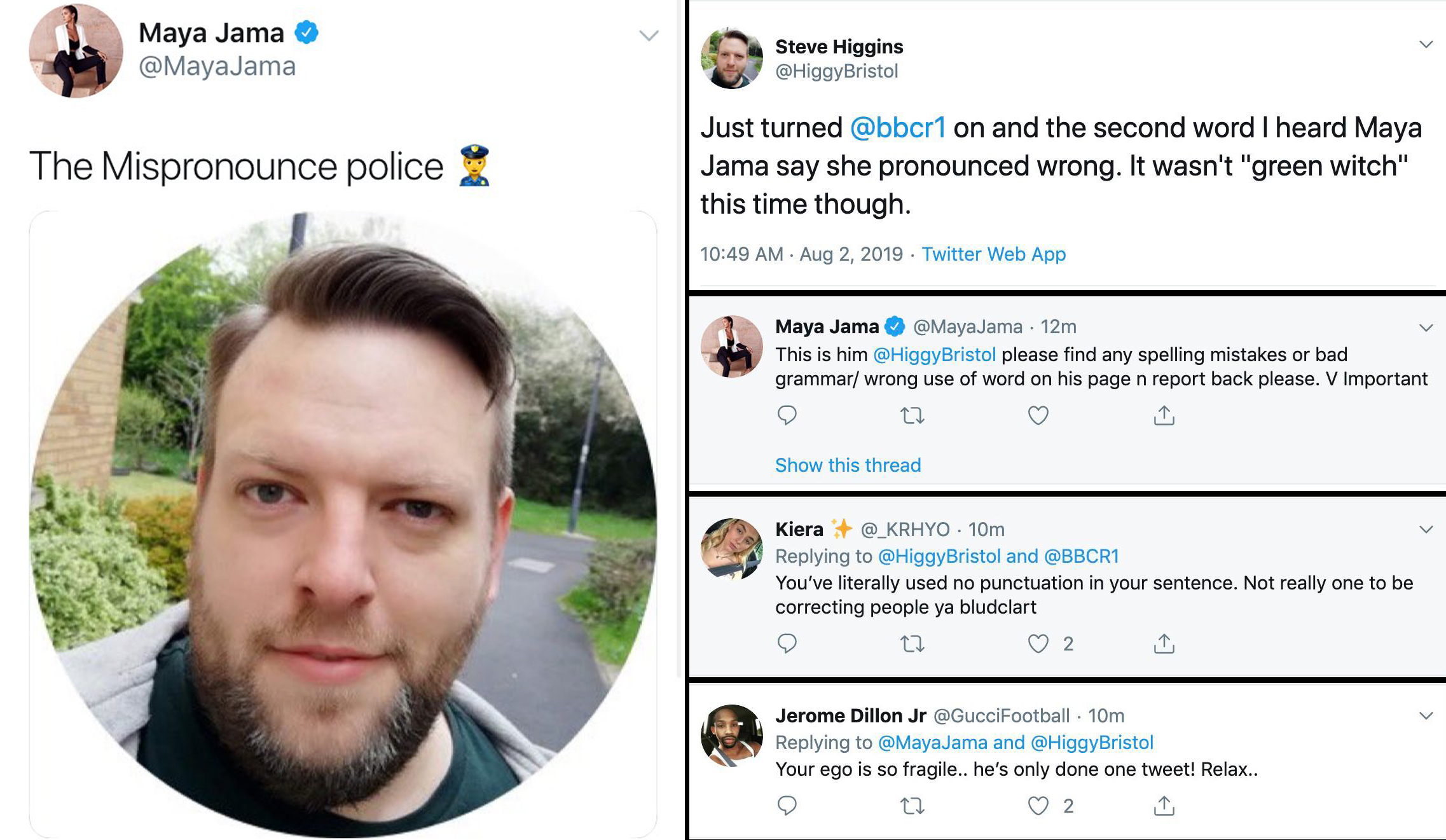 Listeners will know that BBC Radio 1's Maya Jama is known for her occasional humorous mispronunciations. So it came as a bit of a surprise to me when yesterday I lightheartedly mentioned a slip of the tongue on Twitter as was set upon by the DJ.
After hearing the Bristol-born DJ get the name of artist Ultra Natè wrong on her show on Friday, I harmlessly tweeted, "just turned @bbcr1 on and the second word I heard Maya Jama say, she pronounced wrong. It wasn't 'green witch' this time though."
The tweet also referenced a funny moment from last week, when Maya struggled with the pronunciation of the London suburb of Greenwich during Radio 1's Hide & Seek stunt, a mispronunciation which was talked and joked about a lot on the station for the next few days.
Having heard the in-jokes between Radio 1 presenters like Scott Mills who will never let Maya forget her mix up with the title of a Muse song, which she called "Submissive Back Hole," I expected the tweet to be ignored, or perhaps met with a equally jovial response, but no.
Instead, I was surprised to find that Maya had screen grabbed my profile picture and tweeted it to 290k follower with the caption "the mispronounce police" - seemingly unaware of the irony of the poor grammar in this tweet. She then followed up this message by effectively rallying up her followers to attack me on the social network. In a tweet which has since been deleted, she wrote, "this is him @HiggyBristol please find any spelling mistakes or bad grammar on his page n report back please. V important".

While one of the 24-year-old's listeners saw the irony in the grammar of this tweet, many others acted upon her instructions and sent me abuse. The comments ranged from being told to "get a life" by one supporter of Maya, through to a tweet which read, "you're a f**king c**t lad with a 'C'." Her followers even clicked through to my girlfriend's profile that was linked in a tweet and made derogatory comments about her.
However, not every agreed with Maya's response to the tweet, some criticised her for the way she dealt with my feedback. Maya attempted to laugh it off saying, "it's only a bit of banterrrrrr," but one listener questioned whether it really was just "bants," posting a screen grab of the offensive tweets I received to illustrate his point. While another said, "looked more like cyber bullying to me."

Many of Maya's followers thought that her posting a photo of me was a step too far, accusing her of publicly shaming me. One person wrote "ugly shaming by tweeting his profile picture and implicitly encouraging people to shame him. I call that bullying. Disgusting."
Others who challenged Maya were blocked by the DJ, one such person tweeted, "I called out @MayaJama for bullying and she blocked me. What a world. Typical example of fake pretending."
Maya's action are in stark contrast to Radio 1's who actively attempt to tackle the problem of bullying online.