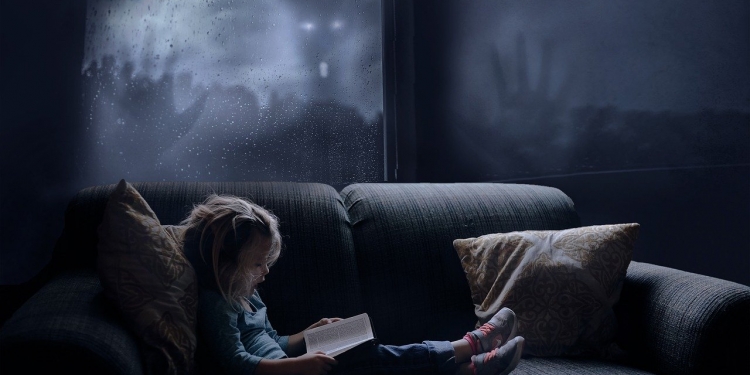 Photo: pixabay.com
This is one of the biggest unknowns amongst ghost hunters, it's also widely contradicted depending on the beliefs of the investigators, and throws into question many of the common beliefs that paranormal investigators share.
At the weekend I was on a public ghost hunt. There were about 10 of us stood in the fairly small kitchen of an old manor house. Several of the guests started calling out to any spirits that might haunt this area of the house, and because it was a kitchen, they addressed a chef.
This is fair enough, but what I thought was interesting was that at one point someone called out, "are we in your way? Are we stopping you from doing your job?" Now, this implies that the spirit of the chef could see us stood in the kitchen, which is fine, but if you believe this to be the case, then you also need to accept that the ghost would see the rest of the kitchen as it looks today.
Having previously been completely destroyed by fire and recently restored as a tourist attraction, the layout of the kitchen is probably now very different to how it once was to allow visitors to walk through. None of the fixtures or fittings are original, the food on the worktops are plastic and glued to the counter, none of the appliances work, and the utensils are fixed to the work surfaces. So, if the ghost can see us and our surroundings, then it must realise that it's not in a working kitchen anymore.
Therefore the ghost would not feel that we are in its way, and wouldn't be going about its past work duties there. This makes that question the ghost hunter asked a bit contradictory in nature. Either the ghost can see us and the recreated fake kitchen, or it sees the kitchen as it was without us being there.
If we now assume that ghosts can't see us or our surroundings, then it is of course possible that ghosts can see the world as they knew it, and they could be going about their old lives and cooking in the kitchen.
However, this creates new problems for ghost hunters, because if the ghost can't see us or the objects around them, then how do they interact?
One of the ghost hunters at the event called out, "can you move the pan hanging from the ceiling?" Assuming the ghost can even hear us if it can't see us, it wouldn't be able to see the hanging pan, it was only put there in recent years and it is fixed in place.
If the ghost, who is seeing the room from its time, did respond to the request then it would move a pan in its own time - a pan that is long gone that we couldn't see.
Similarly, when a guest knocked on the large wooden table in the middle of the table and called out, "can you copy this and knock back?" that's a new table from our time, it didn't exist for them, there might not have been a table there, and if they can't see the table, how would they hear sounds produced by it?
We can take this a step further, how can any ghost interact with our surroundings if it can't see them? Ghosts are said to move objects, knock on surfaces, slam doors, and turn lights on and off, but if it can't see the world around us, then it's not possible for it to do these things, which creates a fundamental flaw in regards to some of the most commonly believed traits of spirit behaviour.
Logically, this means that for any haunting to work as they are reported and as most ghost hunters believe they occur, then a ghost must be able to see us and our surroundings, and be able to interact with them - at least at times. This conclusion literally explains how things go bump in the night, through to how poltergeist activity can occur.
Coming to this conclusion still poses a few issues. Firstly, if ghosts see the world as it appears today rather than it appeared in their time, then we need to accept that ghosts are not stuck performing the tasks they once would have when they were alive as it is commonly believed - this assumption must be wrong. Secondly, it sheds doubt over the common claim that ghosts walk through walls at points where there was once a door.
You can't have it both ways... or can you? Perhaps ghosts float between these two states of awareness, and trying to apply logic and reason isn't possible when dealing with the paranormal. Or perhaps it is just those who believe in the paranormal who are unwilling to accept logic and reason as it challenges their pre-defined beliefs.
View Comments
Tags:
paranormalghostsghost hunting

If you find yourself over-reacting to financial challenges right now, ask yourself if you are not over-identifying with what you have, instead of who you are. You need to take a step back from your job and income, and realise... Read More