This article is more than five years old and was last updated in July 2019. 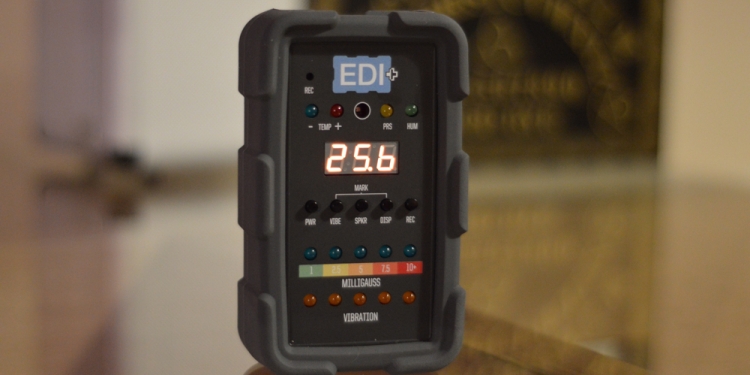 A few weeks ago I went on a ghost hunt where they were using an EDI meter, I'd never seen one before but and when I got home looked them up, I discovered that at the end of last year Centex Paranormal, the company that made the device made a second version... I couldn't help myself.
I ordered the devices which has been updated with two new features and data logging since its original release. It was shipped from the US to the UK by Ghost Augustine who sell an array of paranormal gadgets and it arrived well packed and safely in just eight days.
The first version included a temperature sensor, electromagnetic field sensor, and a geophone sensor which detects vibration. The PLUS model also includes humidity and barometric pressure sensors, and gives you the option to record all the data on to a memory card and export and analyse it later. 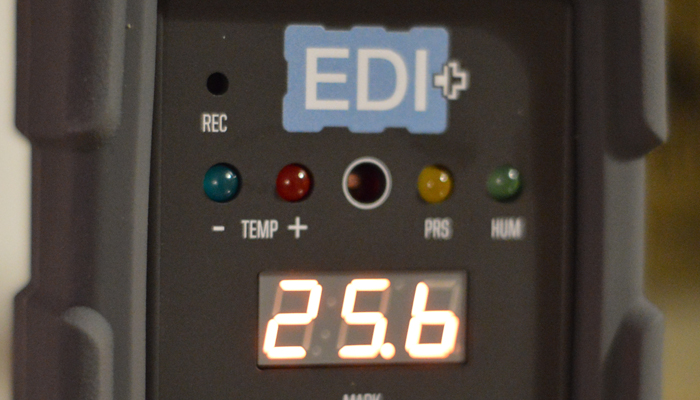 The EDI+ PLUS contains an ambient temperature sensor with a real-time LED display which can be switched between centigrade and fahrenheit. The temperature sensor is exposed on the front of the device and is well shielded which gives an accurate reading. The device runs on standard AA batteries, which does mean there's a running cost but means you don't have the problem of a lithium-ion battery which gets hot during operation and charging.
In addition to the digital display there is a blue and a red LED light which illuminates to indicate a sudden drop or rise in the ambient temperature. There are similar lights (yellow and green) which flash if there's a change in the humidity or air pressure. Pressing the 'display' button allows you to switch the digital display from its default view of the temperature to the pressure measured in hectopascals and the relative humidity as a percentage.
The display can also be switched to show the electromagnetic field strength in milligauss, the EMF sensor's reading is also indicated by five blue LED lights which above a strip of coloured marks which will be familiar to anyone who has used the classic piece of ghost hunting kit, the K2 meter. There is also an optional tone which sounds as the level increases, this can be switched off with a press of the 'speaker' button.
At the bottom of the device there are five orange LED lights which indicate vibration as detected by a three axis accelerometer. This function can be switched off by pressing the 'vibration' button, which is useful because when used as a handheld device the orange lights will constantly flash.

The thing I like best about this device is how robust it is. The build feels solid and it comes in a tough, thick, rubber protective sleeve. Unlike some other devices it feels like the EDI+ would be safe thrown in a bag or in a deep pocket, there's no delicate knobs or switches that could be damaged.
Another great feature is the ability to log data, with a press of the 'record' button the data from all the device's sensors is logged onto an SD card which can be inserted into the top of the device. The data is time stamped and can be opened in Microsoft Excel but if you want to get really stuck into your data Centex Paranormal off a free download of their EDI-Graph software, however this is only available on Windows.
I've been playing around with the device for just over a week now and it seems really accurate, the temperate reading matches an external thermometers, the only thing that can skew it is body heat if you have warm hands and are holding it for a long period of time. The humidity reading matches my barometer and the EMF meter gives a similar reading to the K2 meter.
The device cost $160 which may seem a little pricy for a ghost hunting gadget, but when you consider that this is really five device in one then you can't deny it's great value for money, especially if you're new to the world of paranormal investigation, this device is all you need.
The EDI+ seems to have come a long way since its first version which makes me wonder if Centex are planning a version three, the only thing this device is really missing currently is a built-in microphone and audio record which could be used to capture EVPs (electro-voice phenomenon). If Centex could include this one feature into a future version then I'd be really impressed. I'm sure they'll get there as their product is already leading the way, there is no other product on the market which is a true multimeter designed for paranormal research like the EDI+.