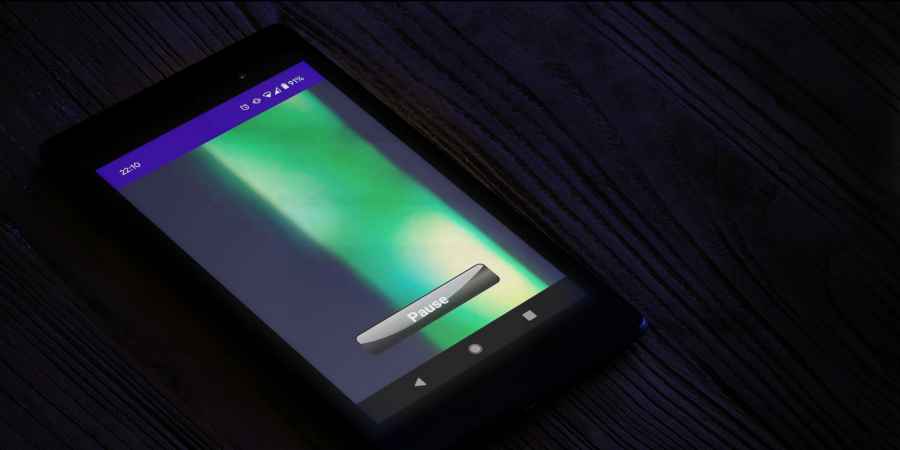 We've all heard about mobile phone apps that can supposedly detect the presence of a ghost, but the creator of a new app claims that it can actually trigger paranormal activity.
The Ghost Code is available now for Android. It is said to be the only phone application in the world that can evoke paranormal activity in seconds. It was created by paranormal researcher, Patrick Jackson, the author of the book 'Quantum Paranormal: A 21st Century Analysis Of Paranormal Phenomenon'. Patrick is an amateur researcher who has a very different take on the world of the paranormal to most and he believes that his app is capable of increasing paranormal activity on demand.
Fundamentally the app, which is available for Android phones now, is pretty simple. All it does is play a high-pitched series of tones and sounds accompanied by flashing visuals on the phone screen. This audio-visual output is actually a carefully created experimental code written by Patrick himself. Patrick says that playing this code in a haunted location will increase the spirit energy allowing interactions to start.
In order to repeat Patrick's experiments with the app for yourself, you'll need to use it at a haunted location, which makes it a bit hard to tell if the app is working since alleged activity will take place there anyway.
While ghostly goings on might naturally occur all day long and even in broad sunlight, Patrick's app seems to only work at certain times of day and in certain conditions. The app's instructions say to use it after midnight in total darkness, so presumably before sunrise. The app instructs its users to put the phone into flight mode and ensure both the volume and screen brightness are turned up to full. The user should then place their phone on the ground with the screen facing up, and then play the code. The app does come with a warning to use with caution, it also warns not to use near animals.
Despite the claim that the app increases spirit energy, Patrick doesn't believe that most hauntings are caused by spirits of the dead. Instead he has a rather unusual theory about the cause of hauntings.
Patrick thinks that things that go bump in the night aren't caused by the spirits of dead humans, but are in fact the subtle signs of the operation of a global network of invisible alien spheres that are protecting Earth's airspace from hostile invasion.
Patrick talks about his unusual theory in detail in his book and even offers up logical explanations for common haunting phenomenon that is generally agreed upon to be unproven in nature. Phenomenon that even the best paranormal investigators can't provide an answer for. The researcher came to this conclusion after studying the behaviour patterns in haunting cases and realising that they aren't like the behaviour of humans, but are more like a computer program.
His work eventually leads him to the conclusion that there is an artificially intelligent network of thousands of invisible metallic spheres stationed around the globe. These usually undetectable objects have popped up in many strange images over the years including classic ghost photos and videos of orbs - not to mention the tales of unidentified sphere-shaped aircraft known as "foo fighters" during World War II. Patrick believes these strange objects are the same spheres that have more recently been seen tracking and swarming vessels in videos released by the US Navy.
Through his research into these spheres, Patrick has discovered that he's able to trigger the haunting-like activity they produce using a custom audio code he's designed that the spheres can understand, resulting in communication in the form of prolonged interaction, the type of communication commonly associated with investigators on a ghost hunt that's explained away as spirit communication.
The app, which has been available for a few days on the Google Play store, has already had several field tests, including at the infamous 30 East Drive in Pontefract.
So far the app's received positive feedback. One impressed user wrote "a nearby REM-Pod activated. Then a few moments later, we grabbed a K-II and that was flashing up and down from green to red." Another user wrote, "we used it last night during an investigation, it does appear to get things going."
Another reviewer, who was initially skeptical wrote, "we tried it in a haunted house last week and it defo increases the energy and activity in the place."
You can check out a video of the code being used by DS Hampshire Haunts team an experiment that blew them away...
Patrick's official Quantum Paranormal app, The Ghost Code, is available now for Android devices on the Google Play store priced £5.99.