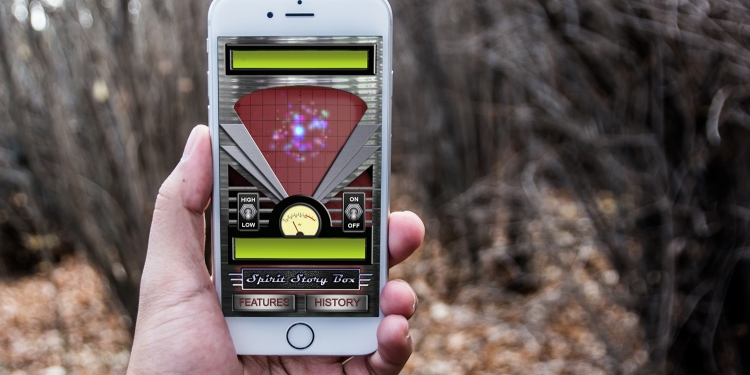 If you've ever been on a ghost hunt, you'll be aware of the huge array of ghost hunting devices available, from EMF meters, to temperature guns and even laser pointers. But more and more mobile apps are appearing on app stores, these tools have divided the paranormal world.
Of course some smartphone apps like voice recorders, which can be used for recording EVPs, are just as effective on a phone as a physical device, but these apps aren't specifically labelled as "ghost hunting" apps. The more questionable apps are electronic speech synthesis applications like Ovilus, Spirit Story Box, and other random word or word bank apps.
These types of apps work as either random word generators, or by generating random sounds, the phonics that make up words. Supposedly spirits can affect the random nature of these apps to form the words they are trying to communicate.
Electronic speech synthesis apps are based on physical "Spirit Box" devices, which work in the same way but use atmospheric sensors to generate its random output. They monitor conditions such as temperature, pressure, humidity, and electromagnetic flux. It uses these signals as a random number generator and this number is used to reference a database of words. The atmospheric sensors give the spirits a way to influence the random word.
The problem with the smartphone versions is that mobile phones don't have any way to detect or measure electromagnetic frequencies or atmospherics. The random numbers/words are instead generated using an algorithm, which doesn't take in to account any outside data from the device to manipulate results.
Some app developers claim that any phone with magnetometer can detect magnetic field fluctuations. While this is true, it's not what a magnetometer is designed to do. The magnetometer is used to detect the Earth's natural magnetic field giving a phone its compass capability, that is used in conjunction with GPS and location services.
Dedicated EMF meters like the very popular K-II meter are designed to detect electromagnetic fields produced by electrical currents that alternate at frequencies between 50-60Hz, like the AC power lines in our homes carry. Whereas the magnetometer in a phone only detects static fields that don't alternate, like the Earth's magnetic field. They are two completely different types of sensor.
What's more, the phone would have to be completely still in order to give an accurate reading or it's movement in relation to magnetic north would trigger false positives.
The creator of the Spirit Story Box app has said that his app is actually nothing more than an algorithmic random word generator, but the hope is that a spirit will know how to interfere with the app and force a word of their choosing rather than it dishing out a random word.
My main issue with this is that as a living human I don't know enough about mobile phone technology and proprietary app development to be able to affect the outcome of a random word generator, so how come when we die we seem to suddenly acquire this knowledge?
Another problem is that these app are primarily designed to spew out random words with the hope that a spirit will intercept and change them, but that means the app will come up with random words regardless of whether there is a spirit present or not.
For this reason, when using an electronic speech synthesis app you should try to encourage the spirits to provide you with answers to your questions, rather than just leaving the app to run of its own accord. Call out to the spirits and ask questions in order to elicit a response from them.
As spirits will only influence certain words rather than producing every word which comes out of the phone, you should discredit any words which aren't relevant to your questions. Only intelligent answers are likely to be the result of spirit interaction, assuming the app works.

Paranormal Hauntings recently posed the question on Facebook, and after more than 300 votes, the opinion from followers of the paranormal is obvious. A clear majority responded "no" to the poll, which asked whether apps could contact ghosts.
What makes this poll particularly interesting is that those who responded are all likely to consider themselves an active member of the paranormal community. They would either read up on the subject of hauntings, or go on ghost hunts themselves. This makes the 81% majority all the more damning for these type of apps.
But perhaps these apps aren't aimed at paranormal investigators at all and are just sold as gimmicks, most do come with disclaimers that they are for "entertainment purposes only."
For more paranormal discussion, debate and news check out Paranormal Hauntings' blog or Facebook page.