Investigating The Untapped Paranormal Energy Of Champness Hall In Rochdale 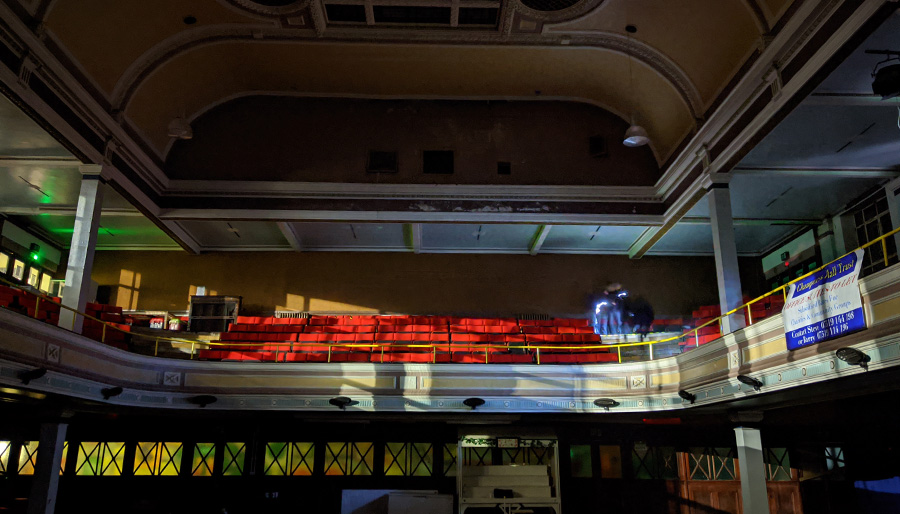 When you embark on a ghost hunt, the aim is always to try to get proof that the location is indeed haunted. Usually when you attend a public ghost hunting event you're aware of the paranormal reputation of the location you're investigating, but at the weekend our mission really was to establish whether the place we were investigating was haunted or not.
On Saturday night I attended a ghost hunting event hosted by Most Haunted Experience at Rochdale's Champness Hall. The event gave fans of the long-running ghost hunting show the chance to search for spooks in the atmospheric and semi-dilapidated hall with two of the show's stars Karl Beattie and Stuart Torevell.
Champness Hall is one of the biggest buildings in Rochdale, but today it's in a state of disrepair, making it an eerie location and one which is said to be haunted. However, until the weekend no paranormal investigations have ever taken place at the hall, so this really was new territory for not only the guests, but also the MHE team and the celebrity ghost hunters.
The night was far from an active investigation, but something about the activity we did get made me feel like we were just scratching at the surface and that Champness Hall still had many paranormal secrets to give up. 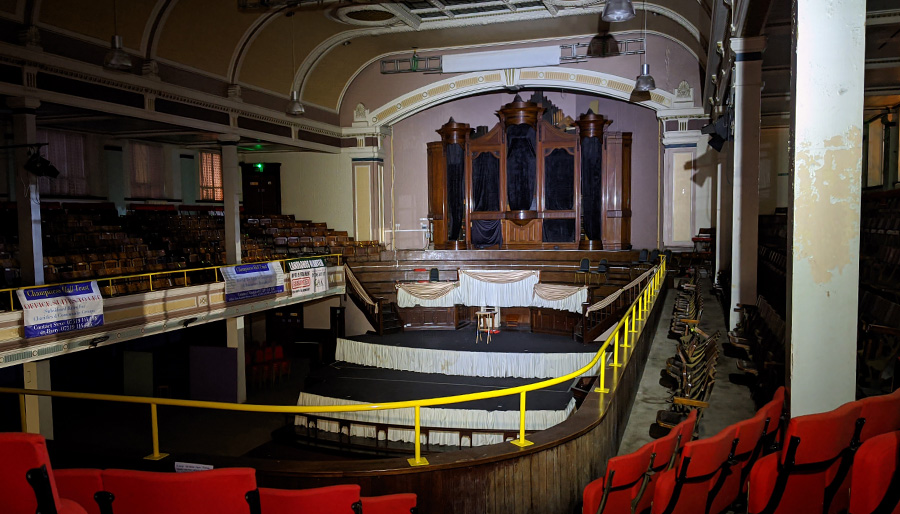 Champness Hall is named after the Methodist minister who funded the building, Thomas Champness. The building is deceivingly large with a maze of back rooms, corridors and multiple stairwells surrounding a large art deco style auditorium at the heart of the building.
Champness Hall now houses a community project giving various charities a place to work from, those working in the building have reported seeing a dark shadowy figure roaming the building, heard disembodied footsteps and voices, and have entered rooms to find furniture has moved around on its own. There's a grand piano in part of the building that's known to play itself from time to time, and despite its size and weight appears to move while the building is locked up at night.
Some think the haunting good be a result of the building's only recorded death, that of a young boy who fell from the balcony in the auditorium in 1946. Ever since people claim to have seen his spirit and even a dark figure walking between the seats on the balcony.

Front Of House & Back Rooms 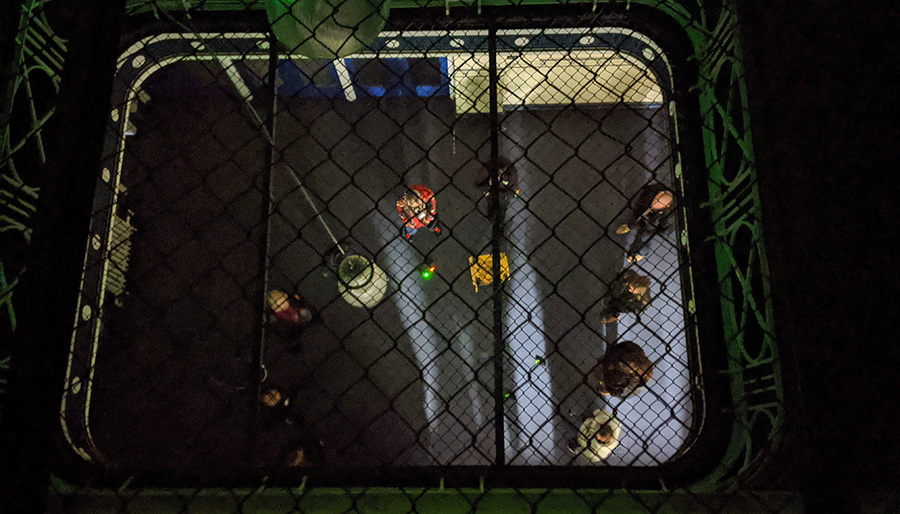 We began our investigation at the front of the building in what would have once been quite a grand foyer. The foyer was split over three floors, with balconies on the upper two floors, creating a clear vertical view from entry-level to the roof.
Things started pretty slowly. Despite giving the location our full attention, it wasn't a promising start. As is often the case on a paranormal investigation, the building fell quiet, apart from the occasional rumble of a passing tram and the sound of fierce wind as Storm Dennis whipped the outside of the building.
We moved deeper into the buildings into some of the back rooms behind the auditorium. It was at this moment that was we realised how easy it is to become lost disorientated in the building with the lights out. Once we'd worked out where we were, we were joined by Karl and Stuart on one of the backstage stairwells.
We had a little bit more activity in this part of the building. Nothing major but a few odd taps, bangs and what sounded like footsteps. We also had a reaction with a very simple ghost hunting gadget, a cat ball. The pet toy is designed to light up and flash when it is moved, but while we were stood around it in the cold, dark stairwell the ball lit up despite no one being near it.
Then suddenly we hear a very loud bang coming from upstairs. The crash was clearly the sound of a door banging. The group went upstairs to investigate. Although we found the door that we believe made the sound, it was open when we got upstairs. We spent another ten minutes or so in the area, but the door didn't slam again. 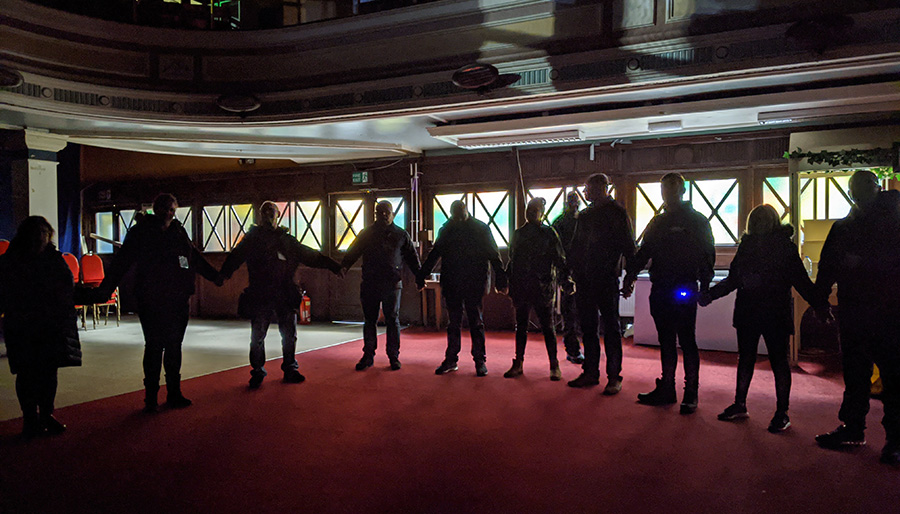 After a quick break and the chance to re-energise with a drink and a snack, or in my case a tasty chicken cup-a-soup with a bread roll, we headed back out into the darkness to continue our investigation. Our second vigil was held in the auditorium, a huge space with a grand art deco stage and an upper ring of seating. The storm outside was one of the worst winter storms in recent years and the roof of the uncared for building wasn't holding up well. The auditorium was alive with the sound of dripping water from all around.
We first held a group séance in the stalls, all the guests formed a large circle and various ghost hunting gadgets like EMF meters and REM-Pods were scattered around. Once again, this proved to be quiet, so we split off into smaller groups. Three of us climbed onto the stage with Reece, one of the event team.
The banging door from earlier in the night was interesting, but the incident that interested me the most that night happened while we were on the stage. Three or four times we heard a very loud knocking sound coming from the stage itself. None of us were moving around at the time and the knocks were too clear and close to be coming from a team elsewhere in the building. We were literally right on top of the sounds.
Then things got more interesting when Stuart re-joined us. He was investigating a couple of incidents of a figure being seen in the upper circle during the evening. The same figure had been seen twice during the night in the same place by different groups of people, neither of which had knowledge of the other's sighting, which makes the sighting all the more interesting.
Stuart was up on the balcony trying to work out how the figure may have been illuminated and visible from the stage by acting as a stand-in for the ghost. You have to remember, Stuart has been a part of the television show for almost two decades and is at events like this almost every week, so it was really good to see how curious Stuart still is and how serious he takes it. Stu wasn't investigating this figure for the benefit of the guests, those who had seen it weren't with him, he was seeking answers for his own peace of mind.

There's never a guarantee that you're going to experience anything on a ghost hunt and it's fair to say that Champness Hall was one of the quieter investigations I've done, but I feel like the location was just waking up. There were a few strange occurrences throughout the night and although they only seemed like minor bits of activity, they remain unexplained.
In fact I'd say that Champness Hall has more potential than some of the more active locations I've been to, because the things we experienced wasn't just evidence that was gathered through questionable methods like human pendulums and Ouija boards, which are almost certainly down to subconscious psychological influence in most cases.
The accounts of sightings of an apparition on the upper balcony also supports my hunch that this location needs some more investigation. Luckily the Most Haunted crew are due to head back to Champness several times over the coming months and you can join them too.
It was a fun evening and nice to see a few familiar faces at the event. I also managed to get my palm read (badly) by event manager Jenny, but I can't guarantee this will happen on every MHE event. Three of the guests were celebrating birthdays over the weekend and each of them were given a birthday cake, which was a nice little touch and beyond the experience you'd expect from a ghost hunting event.
If you'd like to book your own ghost hunt with Most Haunted Experience, you can find more information at mosthauntedexperience.com.
Tags:
paranormaltopicalghost huntschampness hallmost haunted experience