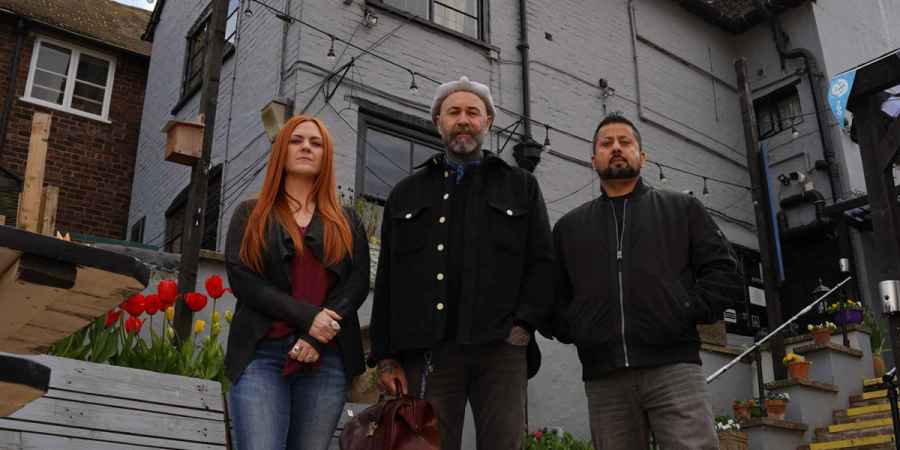 Photo: © Discovery+
'Help! My House Is Haunted' returned to Discovery+ for a fourth series. This time around Barri Ghai, Jayne Harris and Ian Lawman tackled 15 new cases, attempted to help those living in a selection of haunted homes across the UK.
The full series is available to stream now, which means you've probably binge watched the whole series by now, but how much can you remember about the 15 locations that featured in the series and what the team found there?

1. Which of these was the title of an episode in the fourth series?

2. Which member of the team was put into a trance by hypnotist Paul Goddard?

3. Which of these was a historic Somerset inn that the team investigated in the series?

4. What did the ghost of a police man leave around his former home?

5. What was the name of the spirit Barri communicated with via a proximity detector in a village hall?

6. What type of property did the team go to Norfolk to investigate in the episode 'Dead In The Water'?

7. Which method of divination did Jayne use at The Old Vicarage Hotel?

8. Paranormal expert Christian Jensen Romer appeared on the series and revealed to the team that high concentrations of reports of haunting can be linked to which of these natural events?

9. We saw Jayne using a unique type of REM-Pod combined with vibration sensor in the series, but what was it called?

10. At which location did the team encounter the spirits of highwaymen?


11. Which of these is NOT the title of an episode from the show's fourth series?

12. The episode 'Spirits Of The Shipwreck' saw the team investigate at which unusual location?

13. While investigating a haunting with links to nearby railway yard, Jayne spoke to a local historian, but what was his name?

14. The team attempted to drive which type of supernatural entity from a home in Neath?

15. In which county would you find the seaside village of Westward Ho! where the team investigated a spooky house?

16. Which of these is a method of sensory deprivation experiment that the team attempted in the series?

17. Which of these is a former use of the spooky Seafield House during World War II?

18. Which of these Welsh cities did the team visit in the four series?

19. Which of these is an app that the team use during the series?