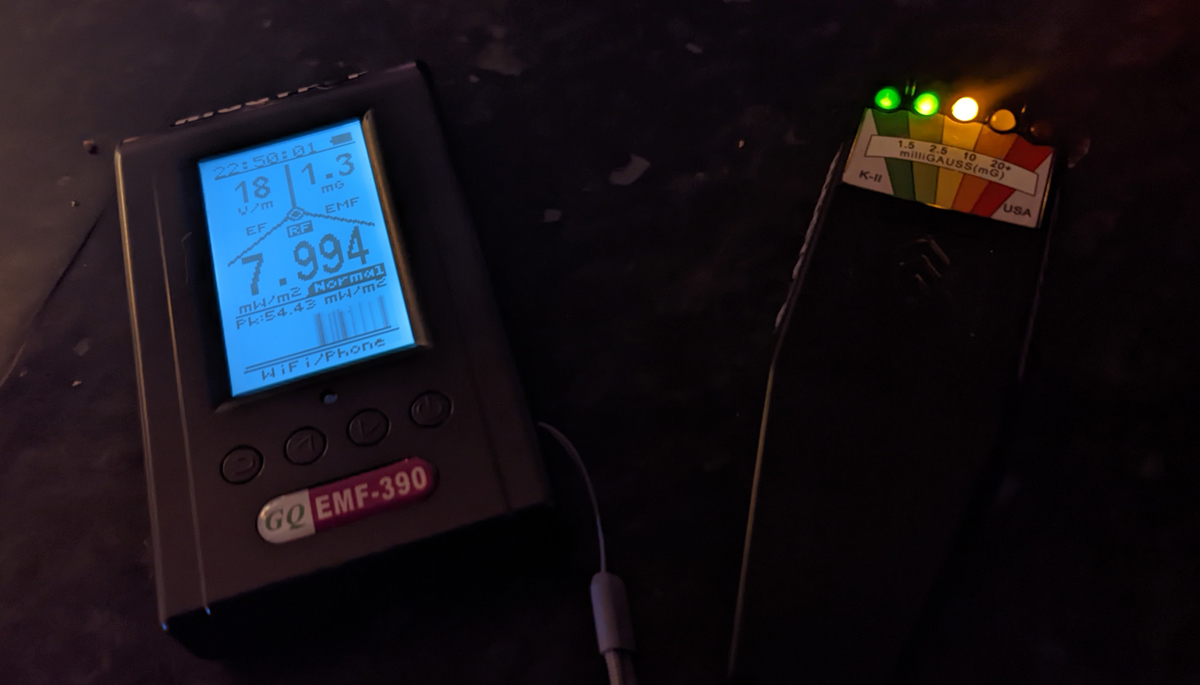 If you've ever been on a ghost hunting event or seen teams investigating haunted locations on television, then you've probably seen EMF meters being used.
The most common of these devices is the recognisable K-II meter, which is probably one of the most common ghost hunting gadgets of all thanks to their low price point and tendency to satisfyingly trigger frequently during investigations.
Ghost hunters started out by using these sort of devices to test a theory that the presence of a high electromagnetic field could cause some people to experience haunting-like phenomenon. If something manmade in the environment is generating a strong field, then it might mean that anything seemingly paranormal that's experienced should be discredited.
However, this logic seems to have been lost throughout the years. Now many investigators conclude that a spike in field strength that coincides with presumed paranormal activity is proof of the supernatural rather than a possible down-to-earth cause.
To understand how an EMF meter works, we need to go back to high school science lessons where we learnt that the electromagnetic spectrum is made up of everything from visible light to invisible radio waves, plus microwaves, X-rays and much more.
Most EMF meters used for ghost hunting, including the K-II, detect Extremely Low Frequencies (ELF), which includes the common 50 and 60Hz range - the frequency of mains voltage electricity.
However, these devices are susceptible to Radio Frequency Interference (RFI) in the form of frequencies outside of the 50 to 20,000Hz range it is designed to detect. This interference often comes from walkie talkies and mobile phones that transmit on a frequency range that's far higher than the detection range of a K-II meter.
Technically a K-II meter and similar devices shouldn't be able to detect things like mobile phones and walkie talkies, but because they are such powerful transmitters, when placed in close proximity to a detector it gives a false positive due to insufficient shielding, which allows the device's wiring and other components (not necessarily the EMF sensor) to become overwhelmed by the transmission. This interference is incorrectly perceived as a "hit" and triggers the device's lights.
So how can you trust an EMF meter on a ghost hunt? Well, the truth is you can't. However, not all EMF meters are made equal and if you're willing to pay a bit more and get something which isn't primarily designed for ghost hunting, then you'll actually be able to make much more sense of the EM fluctuations you encounter on a ghost hunt. 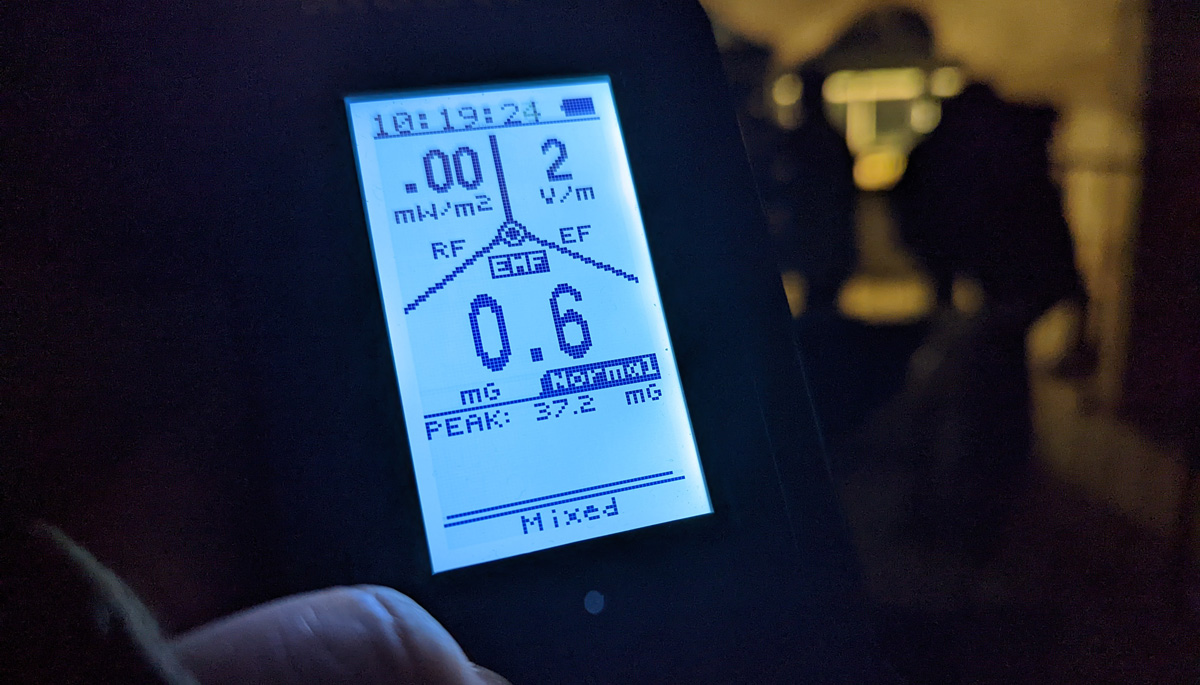 I'm not claiming to be the only person to use one of these devices on a ghost hunt, but I do join a lot of teams on various haunted locations and watch a fair few ghost hunting shows and I've not yet seen anyone else use a GQ EMF-390 on a paranormal investigation.
This could be because the GQ is terrible at sensing ghosts and useless for communication with spirits, but it is very good at detecting electromagnetic radiation. While the K-II and similar devices detect a limited range of EM, the GQ EMF-390 detects a substantial and very useable chunk of it.
As well as detecting the type of ELF fields that the K-II picks up on, such as power lines, it is also designed specifically to detect WiFi, phone signals (including 5G), and radio transmissions including the frequency range of two-way radios and even FM radio broadcasts.
During a ghost hunt, it's best to set the device to the 'all-in-one' mode, which shows you an overview of the current EM radiation around you in one screen. The display with automatically switch between horizontal and vertical depending on how you hold it.
The thing that I find makes the GQ EMF-390 a really useful tool on a ghost hunt is a feature which tells you the possible source of radiation. If a spike occurs in one specific band of the EM field, the device will tell you what the band is used for.
So for example the word "WiFi" might appear at the bottom of the screen to tell you that the spike its detecting is most likely coming from a router or another WiFi-connected device such as a laptop. It will also alert you to microwaves, power lines, static, phone calls, cell towers and more. If more than one kind of source is identified at the same time, then the device will display the word "mixed."
It's easy to understand how this handy feature can be useful on a ghost hunt. If a K-II, REM-Pod or some other ghost hunting gadget starts flashing and beeping, then your GQ EMF-390 will be able to tell you exactly what type of EM is setting it off.
Most often, if a K-II starts flashing on an investigation and I place my GQ 390 next to it, I find that it's either WiFi or a mobile phone causing the device to trigger.
This could mean that we could debunk the K-II triggering as the result of a nearby router or someone's phone, especially since the K-II lights often flicker, which indicates packets of data rather than a sustained electromagnetic field. But we can't say for sure, if you believe that ghosts effect the ambient electromagnetic field or emit detectable fields, then you can't rule out the possibility that they do so within the part of the spectrum that phones and WiFi devices use, although this does seem very unlikely.
However what the GQ EMF-390 does do is give you a good indication of the non-paranormal causes and helps you seek out the source of these EM bursts and allowing you to eliminate them from your investigation.
It's perfect for ghost hunting, the screen lights up so you can clearly see what it's up to, and also provides a nice bit of dim ambient light to keep an eye on your surroundings. It does have the option of an audible tone if it detects a sudden spike, which is useful, and it has the time on the screen, which is great if the night is dragging.
It has several useful views including the RF Browser that visualises the radiation precisely with an on-screen graph showing you digital signals sent over RF in bytes, as well as a histogram representing the power of any radiation detected. This allows you to see exactly where any spikes in the electromagnetic spectrum are occurring.
Once again, this device won't help you track down spooks or even say for sure that EM spikes aren't paranormal, but it will tell you where to start looking for non-paranormal explanations to ghost hunting devices triggering, allowing you to debunk or validate potential evidence.
If you want to give the GQ EMF-390 a try for yourself, they are widely available from various retailers.
Tags:
paranormalghost huntingemf