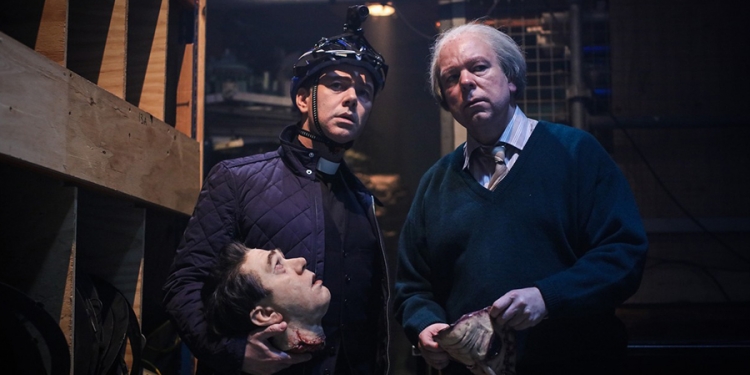 If you watched last night's live edition of the BBC's dark comedy Inside No. 9, then you'll probably still be recovering from the rollercoaster ride of twists and turns that Reece Shearsmith and Steve Pemberton took us on. A fusion of studio shots and archive footage that left viewers wondering which parts were live and which weren't. One thing that you might not have picked up on is that the stories that their Halloween episode were based on are true.
Throughout the episode the cast are tormented by paranormal activity, which first manifests itself as technical issues but soon escalates as the spirits that haunt the studios are able to gain control of the broadcast. At one point Stephanie Cole mentions, "they affect the cables and the television equipment. The technology makes them stronger."
As the spirits grow stronger they become more malevolent, eventually causing Stephanie to take her own life and killing Steve and Reece through studio accidents.
The backstory of the haunting is mostly told through archive clips of television shows and through a news report that Steve reads out to Reece from his phone. The five main elements to the backstory are:
• Alleged hauntings as investigated by the television show Most Haunted
• Bobby Davro almost dying in a prop malfunction
• An exorcism conducted by a Catholic Priest at the studios
• A fire which ravaged part of the studio complex in the 1980s
• A crew member who hanged himself from a lighting gallery in the studio
Of these five incidents, four are factual, let's take a look at them in more detail... 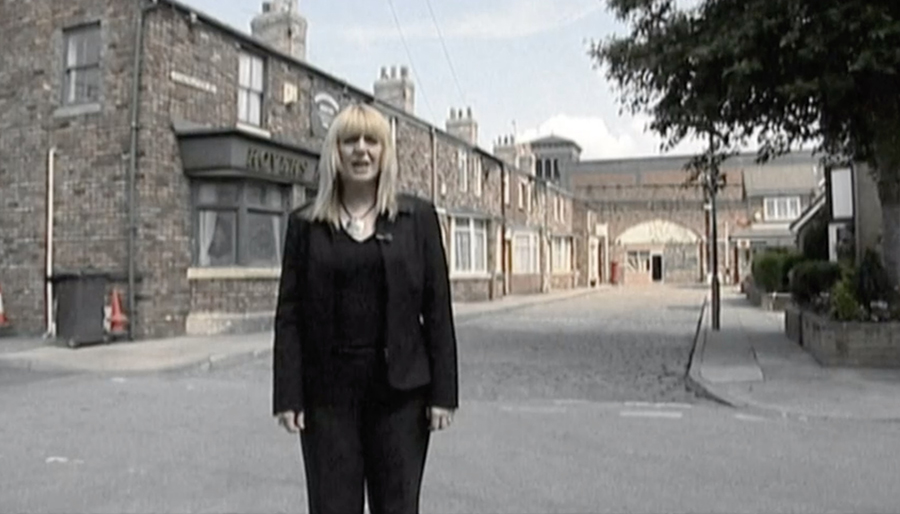 The backstory of the studio's alleged resident spirits was told through clips of a 2005 episode of Most Haunted. Presumably the ghosts of the studios were able to dig this show out of the archives and present it as part of the live show in order to tell us their story.
We see the opening of the episode with Yvette Fielding standing on the set of Coronation Street. She says, "hello and welcome to Most Haunted. This week I've landed us right in the middle of a Great British institution." It wasn't just the famous cobbled street that Yvette and her team were investigating, but the surrounding studio complex.
In the episode of Most Haunted, the show's resident historian and ghost expert Richard Felix talks about the hauntings. At the time the episode was made, the studio had only been at the location for about 20 yers so Richard thinks that whatever haunts it goes back further to the land's original use.
Richard says, "just across the road was the church of St. John's, and I've actually found a plaque in the park which states that on that site were buried over 22,000 bodies in the graveyard and they most definitely stretched over here on to the site where Granada Studios are now."
Sue Cleaver, famous for playing Eileen Grimshaw in the soap told the Most Haunted team, "I can tell you that when you're filming late at night, when you're walking down the cobbles, it's quite a spooky place." She added, "so many people have seen and felt the same things that there has to be something in it."
Apparently, Corrie actors have reported supernatural occurrences on the old set for years, many believing it to be the ghost of Pat Phoenix who played Elsie Tanner in the soap before her death in 1986.
Even the famous bar in the iconic Rovers Return is said to be haunted, many actors reporting being touched or pushed in this area of the studio. Simon Gregson who plays Steve McDonald, said "from what I know, stage one where the Rovers' bar is, that is apparently the place where most sightings are."
One of the most commonly reported sightings is that of the figure of a woman with long brown hair wearing a navy coloured jacket. She's sometimes seen sitting in sofas around the various sets.
Later in the episode Yvette conducts her investigation in the studio building with psychic medium David Wells, this clip is also shown on Inside No. 9. David picks up on the spirit of a male crew member who died at the studio. This ties nicely into the story of Alan Starr, the lead spook in Shearsmith and Pemberton's story.
When the show flicks back to the live footage of Stephanie Cole, eagle-eyed viewers might have spotted a picture on the wall of the Rovers Return, the iconic pub from Coronation Street. This is our first indication that the live show is being broadcast from those same haunted studios. 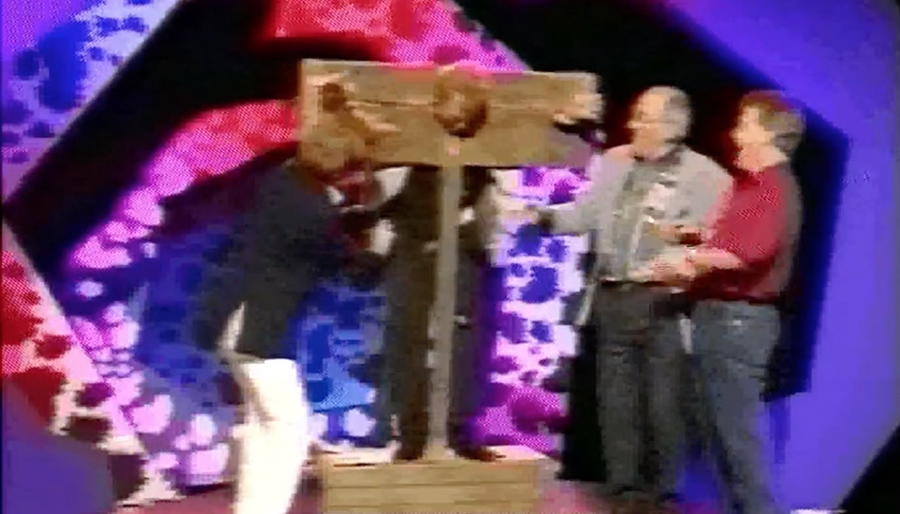 At one point in the episode we're shown an old and very bizarre clip of Bobby Davro. This is back referenced later when Steve is telling Reece about the rumour that the studio is cursed and its run of bad luck. He reads from his phone, "entertainer Bobby Davro nearly broke his neck in a freak prop malfunction."
This incident genuinely happened in the 1990s in the Granada Studios complex. In the clip Davro seems to have been put in stocks by Lionel Blair, Jim Bowen and Keith Chegwin, but unfortunately the stocks topple over and Davro painfully faceplants into the hard concrete floor, almost killing him. The unaired footage was apparently shot for a kids show called 'Public Enemy Number One'. 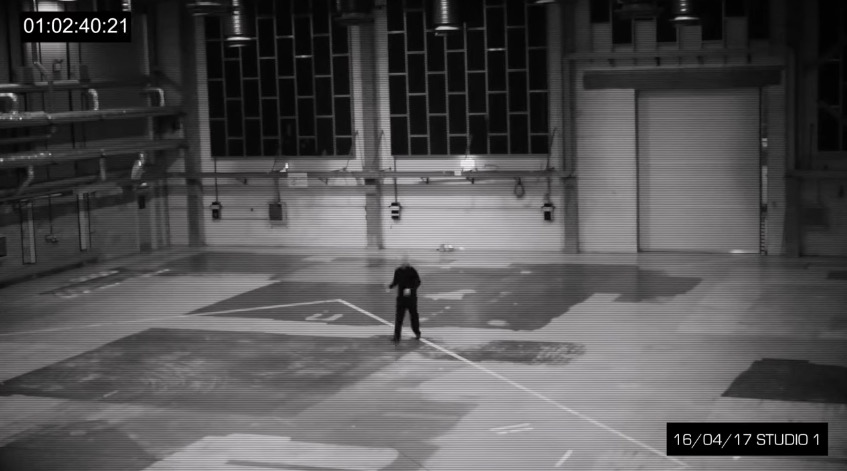 Photo: youtube.com
The third element of Inside No. 9's story only dates back to April 2017 when a Catholic Priest was called in to perform an exorcism on the studio grounds. The moment the priest performs the ancient ritual in the studio's soundstage was caught on CCTV, the actual footage of this was shown on Inside No. 9.
The exorcist was called in ahead of a music event called Granadaland that was due to take place at the Manchester studios. While preparing for the three-day music festival, a band who were not named were freaked out by noises and even exploding equipment. There were also reports of "banging noises" and even poltergeist activity.
The band, one of the tribute acts on the line-up threatened to walk out during rehearsals unless the ghostly activity was dealt with, leaving the event's manager, Christopher Wandsworth no choice but to call in a Roman Catholic priest.
The festival was put on to celebrate the demolition of the old Coronation Street set which, by this time, had stood in Granada's studios for over 30 years and was one of the oldest permanent outdoor television sets in the world. It was built in 1982, replacing a smaller scale set built on some nearby railway sidings which had been used to film the show since 1968, prior to that the show was filmed on a mock-up street erected inside one of Granada Television's studios.
The 1982, almost full-size exterior street was built complete with its famous cobbles in the Granada backlot and was opened by the Queen, however after almost three decades of service, the street moved to a bigger location at the new Media City just outside of Manchester in 2015. 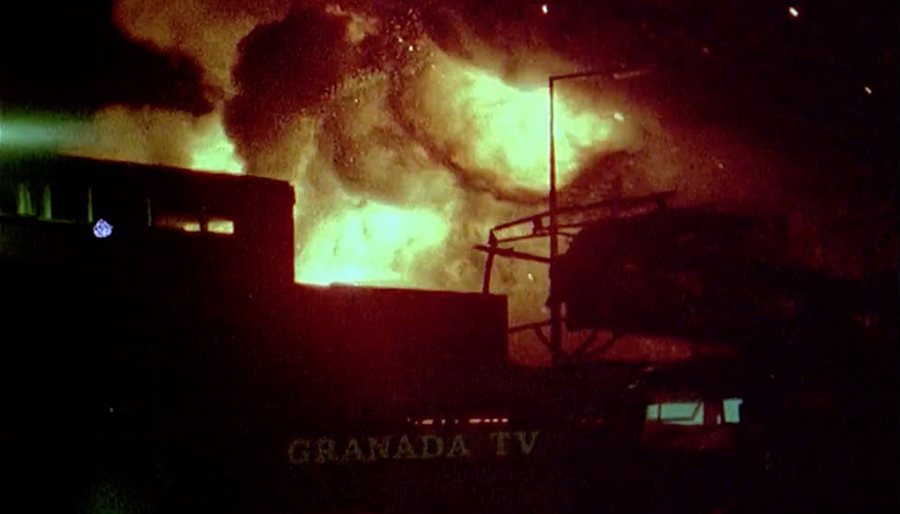 Towards the end of the episode we see an old news clip with a reporter talking about a fire that had broken out in one of the buildings at Granada Studios. Earlier in the episode Steve had said, "there are also reports of a curse in Manchester after a run of bad luck which included a fire destroying costumes from flagship drama 'The Jewell In The Crown'."
This is another true story and the archive news clip was a genuine report from the time. The fire broke out in the Botony Warehouse at the rear of Granada's studios and the building did indeed contained costumes, sets and props for the 1984 television series 'The Jewel In The Crown', all of which were destroyed during the blaze.
Luckily no one was injured during the fire, but this is just another example of the sinister things to have happened at the studio that fuels the legend of the curse.

The Death Of Alan Starr 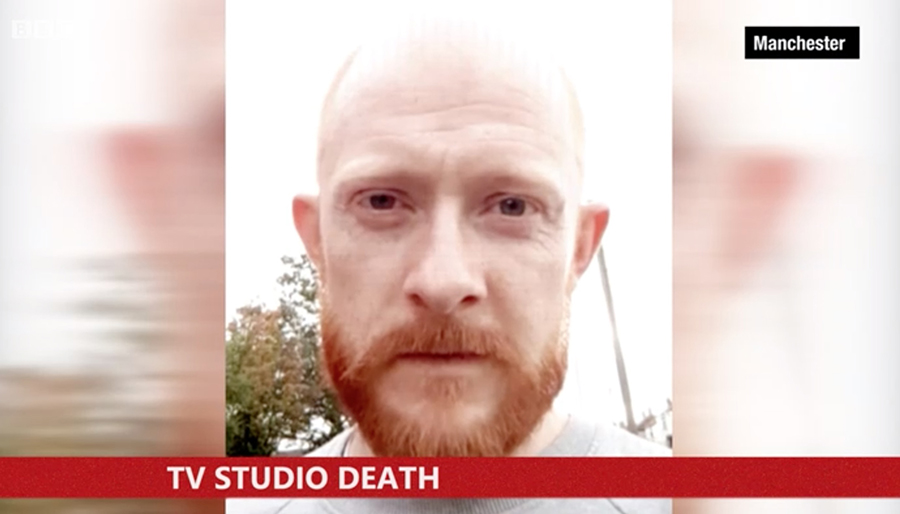 The final element to the story is that of Alan Starr, a member of studio crew who took his own life at the studios. This is referred to in the archive footage from Most Haunted and by Steve, "the untimely death of prop man Alan Starr, who hanged himself from the lighting gallery on Halloween night ten years ago."
In the episode we see what looks like archive footage of a reporter named Laura Howarth, who's covering the story of a "TV studio death" in Manchester. Unlike the other archive clips that have been dropped into the show, this one is not a genuine clip but it serves to add to the backstory of Alan Starr, who hanged himself at the studios and now haunts them.
The news reporter says, "Mr Starr had been suffering from paranoid schizophrenia and he believed the studios were being taken over by what he called ghosts in the machine."
Stephanie also touched on this earlier in the episode, she said "they've always been here. Before us, before the studios. We shouldn't be here, this is their home."
The report is accompanied by a photograph of Alan and it becomes apparent that we have already seen him on several occasions throughout the episode and he is the most prominent of the spooks that's haunting the studio. Alan is a fictional character, but helps to neatly tie the story up and add to the narrative.
Together these five brilliantly researched story elements fit snugly together in a plot that's nicely wrapped up at the end. It's told in a very unique, engaging and best off all, bizarre way.
Tags:
televisionparanormalhalloweenhalloween 2018topicalinside no 9