The Most Haunted Pub In The UK: The Mermaid Inn, East Sussex 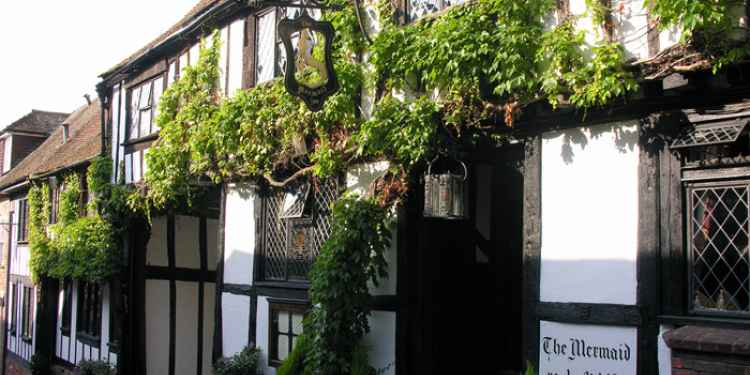 Photo: © Phillip Capper
The Mermaid Inn is a Grade II listed inn in Rye, it dates back to 1420 and has 16th-century additions in the Tudor style. But there's been an inn on the site for even longer, the pervious building burnt down.
It's clear to see how The Mermaid Inn earned its reputation of the most haunted pub in Britain with countless stories of hauntings and so much history, including a time when it was used a base for a notorious band of smugglers.
The pub boast five different ghosts, each of which has been witnessed on many occasions. Guests have reported plenty of odd activity, including waking to find their clothes wet.
Others have seen the ghost of a man walking through a wall in one of the bedrooms, the couple fled the room and slept down stairs on a sofa, refusing to return to their room.
There's also been reports of light anomalies being caught on camera and even a photo of a strange apparition, strangely both of these happenings occurred at exactly 2:15am.
Staff have reported seeing bottles and glasses falling and smashing on their own accord, and the ghost of a maid is said to haunt the pub. She was the girlfriend of a member of smuggling gang who used the pub's cellar, she was killed by the gang as they feared she knew too much and would expose them.
There's also the ghost of a lady who's been spotted wearing white or grey while sitting in a chair next to a fireplace in room 1, she often hangs around for a while, allowing gets the get a good look at her expressionless face, before she simply fades away.
One couple were awoken in the night to find a full blown ghostly duel taking place in their bedroom between two men in period clothing. They witnessed the spirits locked in battle until one of the men was victorious, seconds later the body of the unlucky loser drifted silently through a wall.
The owners of the pub organised a seance to try to get to the bottom of the inn's paranormal activity, and while sat around a table in one of the haunted bedrooms, the medium said to the other participants, "my face will now change as I become the spirit of one of the long dead of this room." According to those present, the medium's face then started to change and distort.
During the same session the medium made contact with a spirit in the corner of the room, and invited the other participants to come over one at a time. One of those described putting their hand through where the spirit was stood, and as she did she saw her own hand disappear in front of her eye.
Add A Comment
Tags:
paranormalghostseast sussex