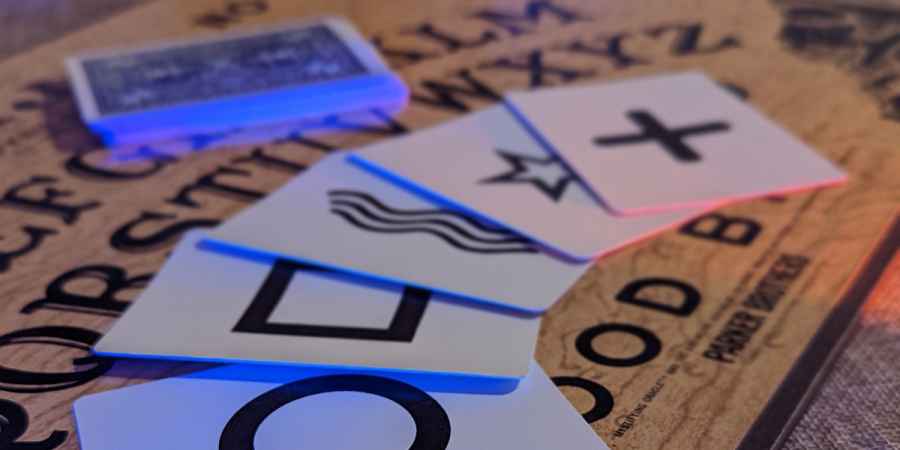 The most famous of Bem's original experiments was dubbed the "feeling the future" experiment, in which he gave his volunteer test subjects a list of words to memorise. They were only given a short amount of time to learn the list before being given a test to see how many of the words they could recall.
The results were not revealed to the test subjects and at some point after the test some of the words were randomly selected and the students were asked to retype these words multiple times for practice.
When the results of the test were analysed, it showed that the students were better able to recall the words chosen for the practice session, even though these words were randomly selected after the test.
This seems to imply that studying the words in the future helped the those being tested in the past, however the professor's experiments seemed to show biased in favour of supporting ESP, as well as serious methodological flaws, such as changing the procedures partway through the experiments and combining results of tests with different chances of significance.
One team of researchers, headed up by skeptics Professor Chris French and Professor Richard Wiseman, conducted Bem's experiment in exactly the same way, they found absolutely no evidence of participants being able to predict the future or being influenced in any way by future events.
In 2016, Bem told his peers at a meeting of the Parapsychological Association, that he had carried out a replication of his experiments, using more rigorous methods than in his original research. This time round the experiments yielded no evidence at all for the existence of ESP or the feeling the future effect.
So, while the wider world might not have directly benefited through innovation, inventions or findings made by parapsychologists, it's clear that parapsychology has had its biggest impact on the scientific method, this has lead to advancements through other branches of science.
But of course, parapsychology has also helped advance the field of paranormal research and helped those who have been troubled by hauntings or anomalous experiences.
Ciarán says that people without an understanding of parapsychology can often be immediately dismissive of people's experiences as being fraud or hallucination, but Ciarán says "you cannot ignore the thousands-upon-thousands of people that have these experiences, and if anything, there is a responsibility on science, especially a branch of psychology to try and understand more about these experiences because effectively parapsychology is about understanding people's behaviour, understanding the mind."
He adds, "we have a scientific responsibility to understand more about these experiences. I think the only caveat to that is, is that message out there? So if somebody has a paranormal experience, I don't think their natural reaction would be 'I'm gonna call a parapsychologist'."
When it comes to ghosts and haunting, Ciarán addresses a clear divide. He said, "Steve Parsons has always been saying, which I think is a brilliant way to look at it, there is a gap between ghost hunting and parapsychology and that gap needs to be filled. It's a gap where we can learn from each other."
Ciarán explains that this is down to the history of parapsychology being primarily lab based. He said, "it's only really within the last five to 10 years that parapsychologists have really started talking to ghost hunters."
He added, "I think because within the field, parapsychology looked at ghost hunting as a non scientific endeavour." The parapsychologist does agree to a point that a lot of the "running around in the dark" isn't scientific, but observing the people doing this is science. Ciarán explains, "data gathering is science and data doesn't have to be hard numbers, it can be recording people's experiences. So, there should be more talking because effectively what ghost hunters are doing, or people that have experiences are doing, is observing in the real world."
However, it needs to work both ways, "ghost hunters can learn from parapsychologists about stuff like sleep paralysis, temporal lobe lability, all of the research and findings that we're doing in parapsychology, a prime example is the paper that I published about environmental explanations."
The paper looked at how factors like visual cues in the physical environment, lighting levels, air quality, temperature, infrasound, and electromagnetic fields could cause someone to have the type of anomalous experience that they might categorise as a ghost, demon or poltergeist. Their study concluded that there is insufficient evidence to suggest that these factors may provide an explanation for a location's haunted persona, perceived creepiness, or experiences that arise from these settings.
Ciarán said, "we made a point of publishing it in a journal where there was no cost involved. People could just get free access to it, but effectively, it reviews all of the studies on environmental explanations for haunting experiences and basically concludes you know, what, the evidence is not there."
The paper made the recommendation that "future studies must [therefore] strive to measure discrete physical factors more consistently, comprehensively, and precisely." Ciarán said, "I think even that simple message, showing that to ghost hunters has been really useful, because you can see the research. Actually, we met some of very, very few guys that are measuring the environment.
Ciarán, summed up, "I guess the issue is for me, is that I'm sold on the idea that the world in some way has benefited from parapsychology, but I am biased because I feel it has, because I'm a parapsychologist."
Tags:
paranormalscience