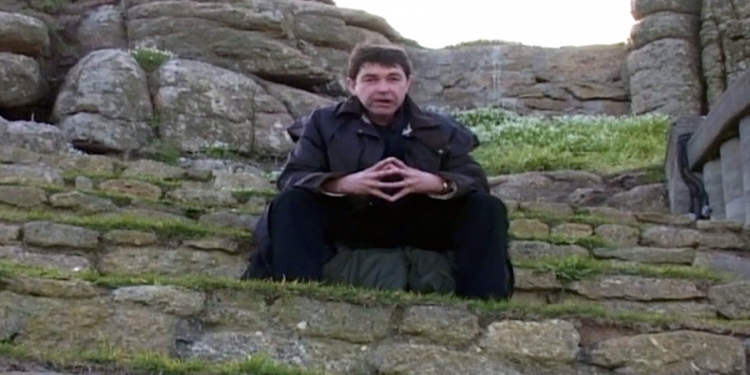 At a time when we're all stuck at home, desperately looking for the next bit of spooky entertainment to keep us amused, Richard Felix might have the answer.
Derbyshire-born Richard is best known for his role as the paranormal historian in the earlier series of 'Most Haunted' - appearing in over 120 episodes, but Richard's passion for the paranormal dates back way before his first television appearance and continues to this day.
Richard, who hosts regular ghost walks in his home town of Derby, is without a doubt one of the best storytellers in the paranormal world, and more than two decades ago Richard set out to tell the best ghost stories from across the country in a series of DVDs.
Richard started his 'Ghost Tour of Great Britain' in 1999, with the aim of visiting every British county to tell their unique and historic haunted tales. Two decades on, Richard now has a back catalogue of over fifty of these DVDs, an accompanying series of books and a podcast series.
Of course, we've now pretty much moved on from the era of DVDs, but in order to keep up with the times and fulfil the demand for his ghost stories, Richard is slowly adding his collection to a new online ghosts and history video platform, that he's cleverly called NetFelix.
The site launched in October 2019 and allows you to rent an individual video for 24 hours, purchase a digital copy, or for £4.99 a month you can subscribe and get access to over 30 titles already on the site. That's almost 24 hours worth of video, plus new films and content with special features is now being created and added to the platform as part of the monthly subscription, which includes a seven day free trial.
It's fair to say that some of the videos haven't aged well and don't have the best production values. Many of them were originally released on DVD and even VHS (ask your parents) in the early-2000s, but despite their lack of cinematic quality, you can't fault Richard's ability to tell a good ghost story.
Richard, who's also the author of 'What Is A Ghost?', has a vast knowledge and expertise of ghost stories, local legends and myths from all over the country, and shared these tales in his collection of videos. Titles include, 'Scottish Ghosts', 'Birmingham Ghosts', 'Merseyside Ghosts', and 'London Ghosts', to name just a few.
The video platform also hosts one-off videos like Richard's 'Guide to Ghost Hunting', 'Great British Witches' and even a video about haunted cars.
Other must-see titles on the platform include Richard's brilliant video tour of the many hauntings of Edinburgh. With its eerie underground vaults and buried streets, the Scottish capital certainly has a dark past to be told. As does Cornwall, a county steeped in myth and legend, where Richard introduces us to an inappropriate ghost that haunts Pengersick Castle, and takes us to a 'dead man's hut' in Portreath.
However, we're still waiting for the very memorable 'Somerset & Bristol Ghosts' from 2003 to appear on the site, which features Richard's account of the screaming skull that refuses to be put to rest at Chilton Cantelo churchyard, near Yeovil.
The former 'Most Haunted' star is a firm believer in the idea of stone tape theory, and often explains how this relates to hauntings in his videos. He speculates that stone is able to store images from the past due to its silica and iron oxide content. Silica is a source of silicon which is used in the production of microchips and integrated circuits, he believes that this makes stone capable of recording data. While iron oxide allows stone to mimic the properties of ferric oxide audio and video tapes.
"The energy used by the body and the brain in resisting death can be so immense that those events can be replayed either on the anniversary of the event or when the atmosphere is similar."
Richard is still very much an active member of the paranormal community. He currently owns the historic and very haunted Derby Gaol, the scene of the last execution in England in which the condemned was hung, drawn and quartered. Since 1997 Richard has been running the goal as a working museum which is open to the public. The paranormal historian worked hard to restore the location to mirror its original state as closely as possible, after it had been through many incarnations prior to Richard's tenure, including at one time a nightclub.
If you want more paranormal entertainment from Richard, then have a listen to his Ghost Tour of Great Britain podcast series, in which he shares ghost stories from some of the most haunted places in the world. He also shares his insight on haunted graveyards in Britain, plus the most haunted castles, and attempts to answer the question of whether pets can see ghosts.
You can sign up for NetFelix with a seven day free trial now by visiting netfelix.co.uk.
Tags:
paranormalrichard felix