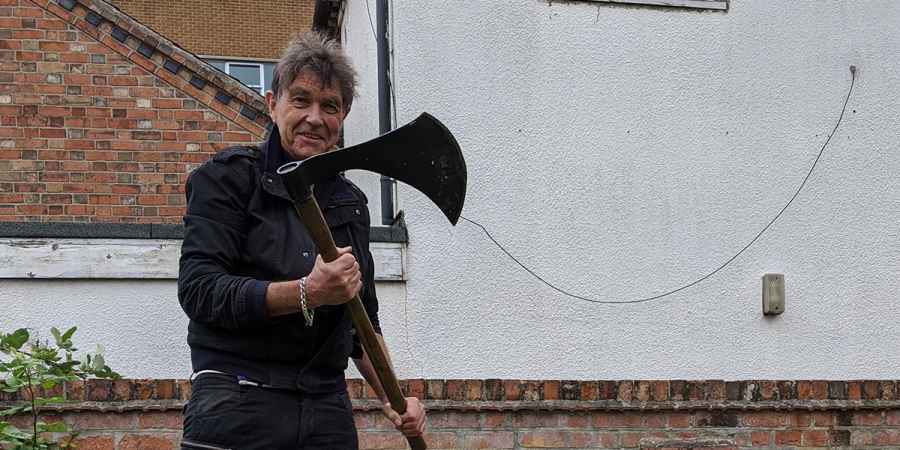 Last week I made the trek to Derby to one of the former county jails because it was execution day. Thankfully, there were no real criminals at the end of a rope or with their head on the chopping block, but several watermelons did pay the ultimate price as part of Richard Felix's beheading demonstration.
The execution day event was hosted by Richard at the historic Derby Gaol on Friar Gate in the heart of the city. Richard is perhaps best known as the resident historian in the original series of 'Most Haunted', appearing alongside Yvette Fielding in over 100 episodes of the show.
Locally, Richard is known for his famous Derby ghost walks, which operate from his headquarters at Derby Gaol. Today the old jail is run as a museum, but several times a year Richard opens it to host his grim yet fascinating execution day events.
I made the long trip to Derby on execution day like many in the wider county would have each time an execution was carried out outside the jail.
We were welcomed to the jail by the very friendly and enthusiastic Richard.
He told us that until public executions were banned in the UK in 1868, thousands of people from local villages would travel to Derby on execution day to "watch you dance at the end of a rope." Richard painted a scene that sounded reminiscent of a festival. He said, "people started arriving early morning and pubs did a roaring trade."
Like the crowds of spectators more than 150 years ago, we were gathered outside Derby Gaol. The jail was originally built in 1756 as the second of three county jails. If you committed crimes in any part of Derbyshire, you were brought to Derby to face trial and brutal execution right outside the jail. 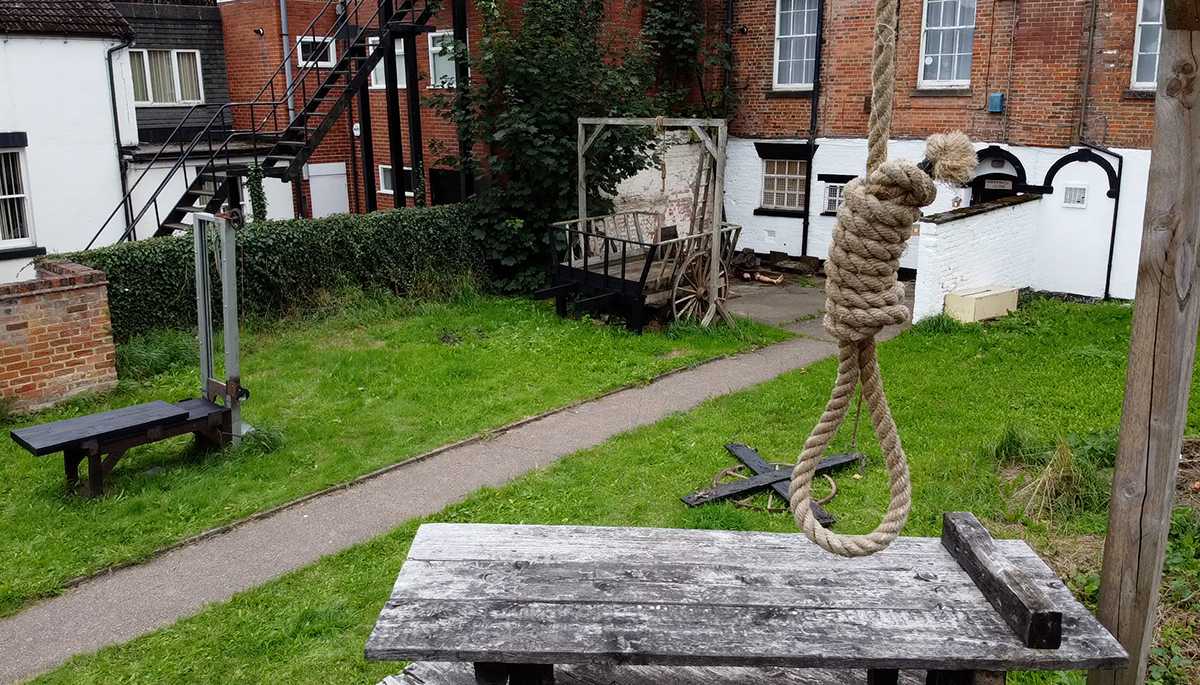 Part of the historic old jail still exists in the basement below the building that once housed a much larger jail. Outside in what was the prison's yard, Richard had a grim array of gallows and guillotines that he was demonstrating to members of the public all day.
Richard started by telling us why execution was chosen as a punishment for crimes in England. Derby Gaol opened in 1756, and by 1820 it was bursting at the seams. Six people were locked up in each cell for 23 hours a day. There was straw on the floor and no beds.
To help cut the growing prison population, more than 200 offences had the death penalty attached to them. Richard told us that this could be anything from setting fire to a haystack to murder. He added "you could even be hanged for digging up turnips ...not your own, somebody else's."
Richard and his guests gather around the first set of gallows in the gaol's yard. An old fashioned horse-drawn cart was parked under the gallows. Richard told us that on execution day, the condemned man would be brought to the gallows on a similar cart, sat on the coffin he had made for himself while in jail and with rope already around his neck.
The cart would be paraded through the city to the gallows, locals lining the streets to watch the show. It's said the the city's publicans would offer the condemned man a last drink before being put back on the wagon for the final part of their journey to the execution. Richard thinks this could be the origins of the commonly used saying when someone is abstaining from alcohol, "I'm on the wagon".
Upon arrival in front of the jeering crowds outside Derby Gaol, the cart was parked under the gallows, the rope was thrown over and tightened and a cap pulled over the condemned's face. Richard said, in a jolly tone, "someone hits the backside of the horse." Of course this results in the horse pulling the cart away and the criminal gently falls off the back of the cart and is hanged. He eventually dies, but it's not quick. Richard tells us it's anything up to 15 minutes and sometimes longer.
Another interesting nugget of information that Richard told us about the gallows is that after the condemned man had been declared dead, the executioner cut the rope up and sold it to spectators as a souvenir, this is the origins of the phrase "money for old rope."
Richard promotes his execution day events with the tag line "bring the family." The 12-year-old boy on the talk with us was loving the gory details of the executions that once took place in his hometown, but Richard was only just getting started.
The next chapter in English executions came in 1751 when it was decided that the punishment needed fit the crime. Richard said, "they need to create a terror worse than death for murders."
So from that year on, if you were convicted of murder, not only were you publicly hanged, your dead body was then taken to the Shire Hall for a public dissection - again thousands of spectators would queue up to watch this gruesome act.
The bones were sent to skeleton makers for universities and hospitals, internal organs examined to further medical science, but the skin was used in a much more wretched way.
Richard said, "in Suffolk there is the book bound in the skin and the pickled scalp of William Corder with one ear still attached." The book is on display in a museum in Bury St Edmunds and Richard excitedly told us that he got to hold it while visiting the county when he was filming his 'Ghosts Of Britain' series of DVDs.
Of course, as Richard reminded us, all this means that because the body wasn't whole, there would be "no material resurrection for you."
No murderer was allowed to be buried, which Richard explains was "paramount for people in those days, they needed six foot of English earth, a grave stone with their name on it, a family around the grave and a Christian burial service."
Richard resisted wandering into the territory of ghost and hauntings further at this point, as this was after all execution day, not a ghost walk. Although, it should come as no surprise that Derby Gaol is said to be very haunted.
Richard's dark tale of how execution evolved continued as he told us how hangings became quicker and more efficient with the use of trapdoors and longer ropes.
It was executioner William Marwood, from Horncastle in Lincolnshire who realised in the 1870s that if he gave you a bit of extra rope, when you went through the trapdoor, the rope snapped up bringing about a broken neck and making your death much quicker. This was also the origin of another common phrase, "cut me some slack."
Things got darker still when Richard went on to talk about hanging, drawing and quartering - a fate reserved for high treason. According to Richard, this happened twice in Derby, "in 1588 we hanged, drew and quartered three Catholic priests on St Mary's bridge."
The second time was in 1817 when the ring leaders of then Pentrich Rising were convicted of High Treason and sentenced to execution by being hanged, drawn and quartered.
The twisted punishment involved disembowelment, the innards are burnt. Then the head is removed from the body and the rest of the body divided into four equal pieces. The pieces were often hoisted on to the side of the chapel and heads put on spikes as a warning to others. 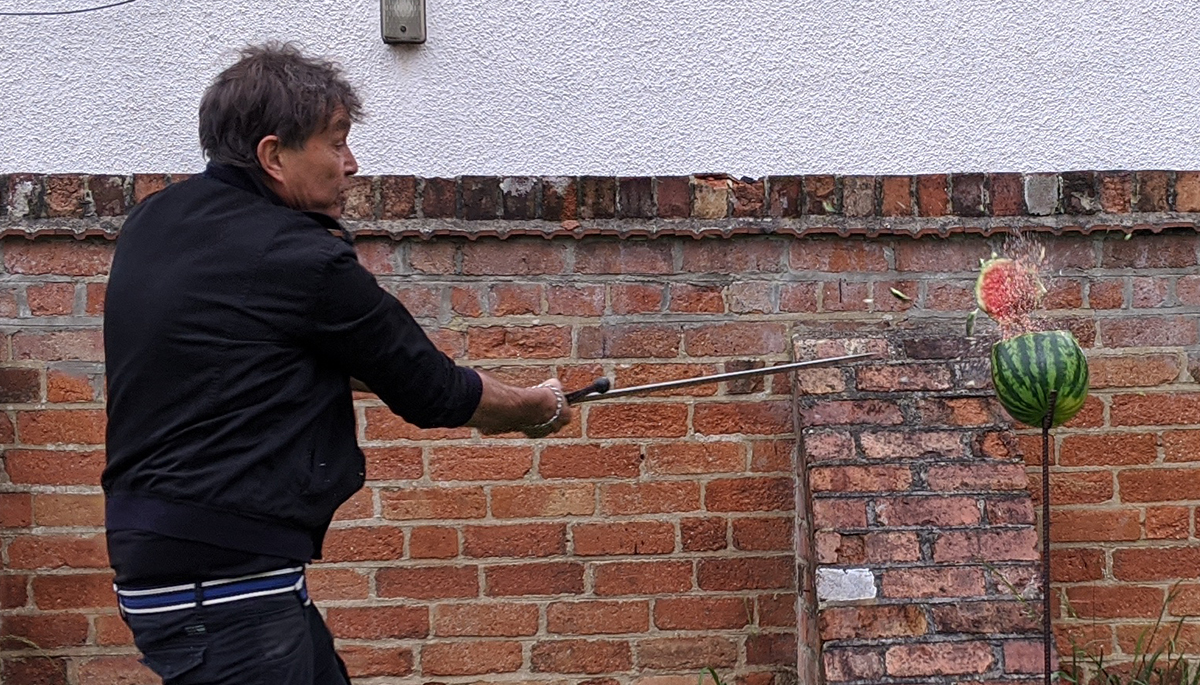 The highlight of the day came when Richard demonstrated his own execution skills - luckily on a watermelon rather than the members of the public who'd come for the afternoon.
Richard first placed a watermelon on a chopping block and efficiently split it in half with a rather large axe. Then he perfectly sliced through a melon with a sword which simulated the head of a kneeling criminal. Beheadings were reserved for the noble - lords, ladies and kings who had been sentenced to death.
From beheadings Richard moved on to his guillotine, which he described as "a machine designed to take the head off in the most humane way possible."
He then told us about the very brutal practice of being "broken on the wheel." We won't go in to that slow torturous method of execution here, as even Richard says "I think that has to be probably the worst form of execution."
We then heard about being pressed to death, while gathered around a mannequin under a pile of rocks. Richard told us that the accused had a similar pile of iron and stone placed on them for hours or days on end until they talk or die. Richard tells us that the sick method of torture gave rise to the phrase "I won't press you for an answer."
He then informed us that the last pressing to death actually took place in Derby in 1665. A deaf and mute girl who had been brought to trial for stealing gloves couldn't plead in court, so was pressed to death. 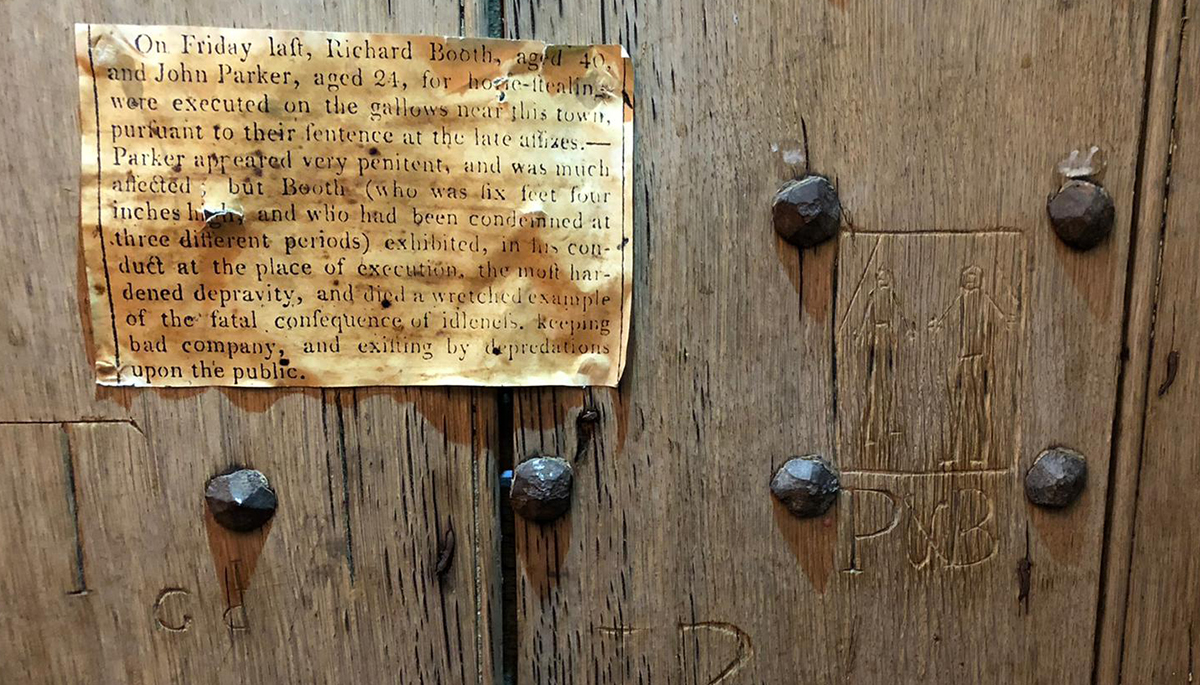 For the final part of the roughly hour-long talk, we went inside the old jail itself and the dissection room where Richard talked us through several 'penny dreadfuls' on the walls. These were biographies of the condemned that were commonly sold at public executions.
The tour soon became a fascinating Derby Gaol door tour as Richard talked us through some of the incredible graffiti that still exists carved into the wood of the original cell doors.

Having seen Richard speaking passionately about ghosts and the paranormal on television for so many years, it was a real treat to meet Richard in person and hear his tales of death, suffering and our dark history in person.
Richard is a true storyteller, he effortlessly sucks you into his accounts of grim acts from the past, with the odd joke thrown in for good measure. It's clear that Richard is very knowledgeable in this field and loves reading and researching the history of not only Derby Gaol, but English crime and punishment.
There's not yet a date set for Richard's next execution day, but it's well worth keeping an eye on his website and Facebook page for more information. I highly recommend a visit to hear Richard's accounts for yourself.
Derby Gaol is easy to get to, with parking right outside. If you're travelling from further a field, then why not have a look around Derby too? Many of its most famous haunted hotspots are within walking distance of the jail, including The Bell Inn, Ye Olde Dolphin Inne and the Silk Mill.
Richard also hosts ghost walks around Derby, which are slowly coming back in limited numbers after the pandemic. Details of upcoming walks and future events at Derby Gaol can be found at richard-felix.co.uk.
Tags:
paranormalderbyderbyshirerichard felix