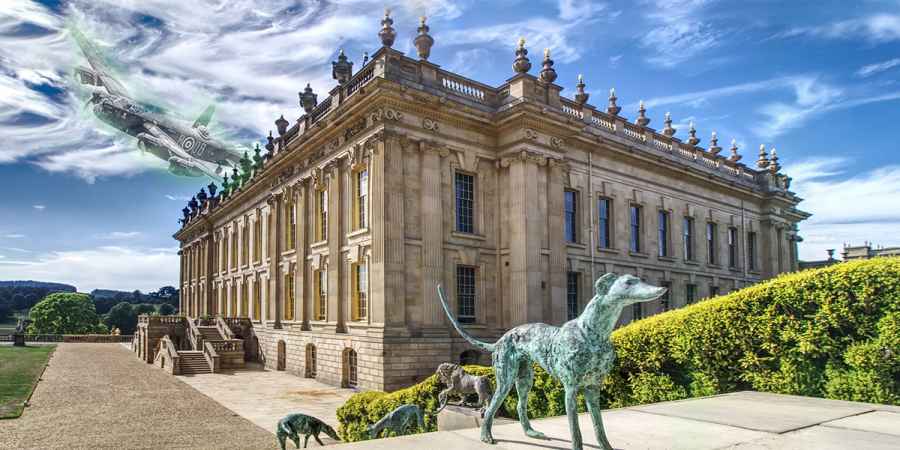 The ghostly mystery of a phantom Lancaster bomber spotted over the Chatsworth estate by a local couple has been solved after Derbyshire Live asked readers for help.
Christine and Robin Gardner told the local news site that they saw what they believed to be a Avro Lancaster bomber in the skies above the stately home and its grounds which suddenly vanished in to thin air.
They said they recognised the WWII plane by its distinctive sound, but were confused when the plane and the sound of its engines seemingly blinked out of existence.
The couple were left wondering what they'd witnessed last summer, and after going six month with no one believing their story, they turned to the press for help.
Christine told the website, "on August 18, I was parked up in Carlton Lees car park near the Garden Centre with my husband and a friend. Between 2pm and 2.30pm we returned to the car park and sat down to enjoy a picnic. Suddenly, directly in front of us at tree top height we heard the noise of an engine. We didn't hear it coming - it was just instant."
The couple made inquiries with Chatsworth and the local authorities, but they were unable to get any confirmation that a bomber had flown over the estate that day. Christine described the moment she was the plane, "we looked up and all three of us saw a Lancaster bomber. It dipped its wings, continued at tree top height and turned as if to fly down the valley, but the Lancaster just suddenly disappeared and the noise of the engines ceased."
Appealing to readers of Derbyshire Live, Christine said, "we know what we saw and it was so real but no-one ever believes us. Surely someone else must have seen the Lancaster or heard it. It only appeared for less than a minute, but made such an impact on us."
There are only 17 surviving Lancaster bombers in the world, one reader commented on the news story, "we have only one airworthy Lancaster in the UK and she was at Duxford having her yearly service and is still there so it's not her."
Other readers said that they has also seen and heard similar planes around Chatsworth and the Peak District in the last few decades. One wrote in a comment, "I, too, saw this 'ghost plane' about 17 years ago when we were driving through the Chatsworth estate."
If the plane were a phantom aircraft, then where would it be coming from? Perhaps from RAF East Kirky in Lincolnshire. The former airfield is over 60 miles away, but since it's directly due east from Chatsworth, it's very likely that planes from this airfield would have flown over Chatsworth. There's also a story dating back to April 1945 that might explain the sighting.
A Lancaster was being loaded with bombs on the base when a fully armed bomb was accidentally dropped onto the tarmac. This resulted in a huge explosion, which set off further bombs. Four people were killed, six Lancaster were destroyed and a further 14 were damaged.
Sore more sceptical readers suggested that the sighting of the plane could have been a current military transport aircraft. Atlas and Globemaster do fly in the area from time to time.
RAF four-engined Lockheed C-130 Hercules transport planes regularly fly low level in near Chatsworth too. The Hercules are based at RAF Brize Norton in Oxfordshire but routinely fly through the region on training and routine missions.
One reader checked the logs of a public flight tracking app from the day of August 18, which confirmed that a Hercules Lockheed C-130 RAF aircraft did fly nearby at 2:40pm. Two years earlier there was a similar report of a ghost plane in Derbyshire, at the time the RAF confirmed that this was the result of Hercules sighting too.
But even if it was a Hercules, how does this explain it disappearing into think air? If the plane was low to the ground as described, then it could have dipped behind trees or taken a sudden turn which moved it out of view. The same could be true of the instantaneous sound of the engines stopping. This could be the result of the plane going out of sight, which would also muffle or block its sound, even a change in wind direction can make it seem like a distant sound has suddenly stopped.
Although some readers remained unconvinced by this explanation. One reader commented, "it's not that difficult to distinguish a Hercules from a Lancaster. They neither look the same nor sound the same."
Tags:
paranormaltopicalderbyshire