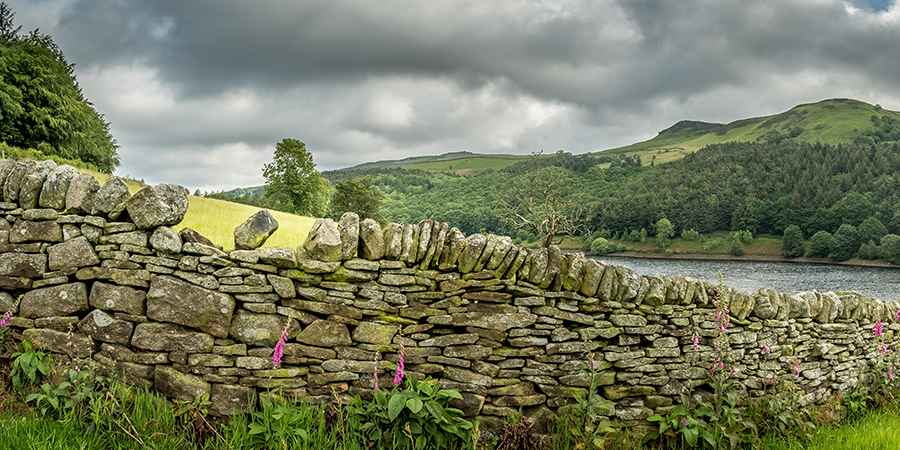 Photo: pixabay.com
This driving tour of Derbyshire will take you to some of the county's most interesting haunted hotspots. The tour includes some driving between locations and makes recommendations on where to stop for lunch, whether you fancy a picnic or a pub meal.
The day trip is a full day out. Allowing for time to look around locations and food breaks, it'll take you about five hours. Although this is not primarily a walking tour, there is at least two or three miles of walking built into the route, or more if you fancy a bit of a stroll.
The perfect day to head out on this haunted road trip is a Saturday as the historic Derby Gaol is only open one day a week. 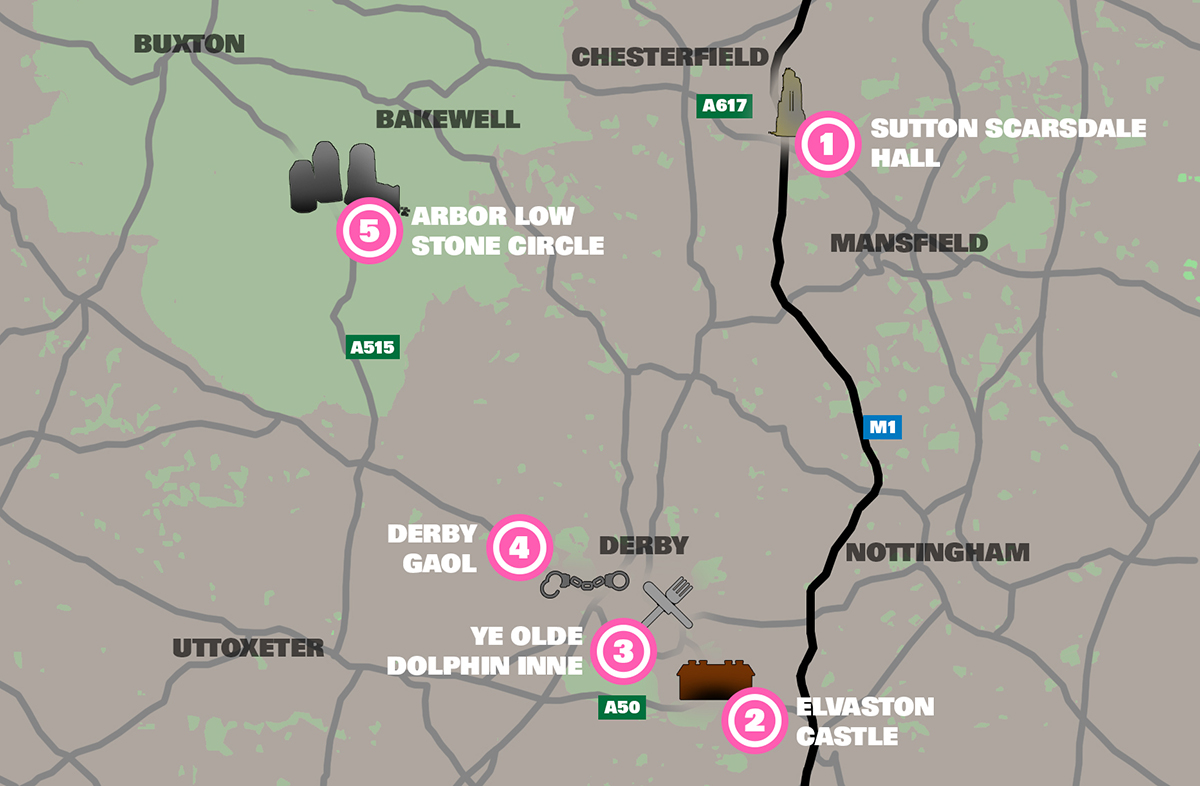 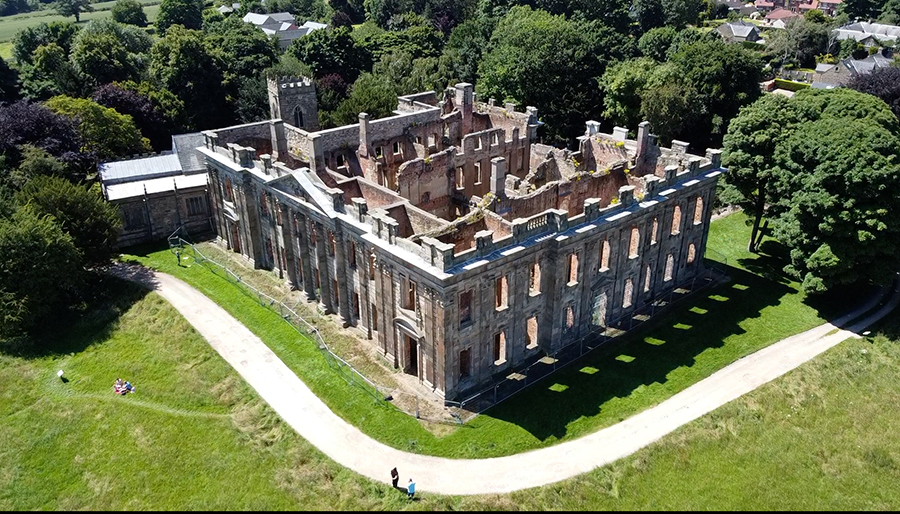 Location: View on map
Parking: Free onsite parking
Walk: < 1 min
Your first stop is a now-ruined Georgian home near Chesterfield. There's free parking in a small carpark right outside the house, which is looked after by English Heritage.
The interior of the house has been gutted and the roof removed, and although you can't go inside the house today, it's possible to soak in its eerie atmosphere by walking around the outside. The impressive structure, albeit in ruins, still stands on the crest of a valley overlooking the M1 as it snakes through the Derbyshire countryside. Look out for another of the county's paranormal hotspots, the impressive Bolsover Castle is situated on the other side of the valley.
The hall fell into a state of disrepair after it was put up for auction in 1919, the market for large homes was in decline and the hall did not sell. Instead the hall was bought by a group of local businessmen who stripped its valuable fixtures and fittings, and even the roof.
The ruins have been a regular haunt for paranormal investigators, as the newspaper article from 1969 below shows. The hall is said to be haunted by one of its former residents, Nicholas Leke. Some think he has been seen wandering around the ruins and the neighbouring graveyard in the form of a dark shadowy figure. Others have reported orange and white balls of light floating in the sky around the hall.
The most paranormally active part of the property is the cellar where there have been countless reports of the sound of disembodied footsteps, screams and whispers. English Heritage staff working on renovating the building claim to have smelt the smell of tobacco in this part of the hall several times.
Perhaps the creepiest phenomenon to be reported at Sutton Scarsdale is the sighting of a floating dismembered arm, which beckons people down into the cellar, but why anyone would accept that invitation is beyond us.

🖤
Location: View on map
Drive: 40 mins south via M1
Parking: £1.60 for two hours onsite parking
Walk: 10-15 mins from the carpark to the hall
Lunch Option: Great picnic spot with tables available
After leaving Sutton Scarsdale Hall, head south along the M1 to the outskirts of Derby and Elvaston Castle Country Park. There's a large carpark which takes cash and card payments. A short 12 minute walk through the parkland from the carpark takes you to Elvaston Castle itself, a Gothic Revival stately home, which over the years has fallen into disrepair.
The interior of the castle isn't open to visitors due to its condition, but it is said to be the most haunted location in Derbyshire, so it's well worth a visit to see a location of significant paranormal history for yourself.
Various professional investigations have been conducted in the castle, including by Yvette Fielding and the 'Most Haunted' team, with phenomena being reported including unexplained noises, full apparitions, people being pushed and things being moved.
The castle's ghosts are said to include a maid and "a strong woman", as well as two spirits known as The Grey Lady and The White Lady. The White Lady is said to be the ghost of Maria, wife of the 4th Earl - she's been seen sitting in the windows of the castle, and walking the grounds with a white dog.
If you have time, the gardens and St Bartholomew church which is situated right next to the castle are also well worth a look around. There are plenty of picnic benches, making Elvaston Castle Country Park a great place to stop for lunch.

Location: View on map
Drive: 20 mins
Parking: £3 for two hours on nearby Agard Street, DE1 1DZ
Walk: 10 mins from the carpark to the pub
Lunch Option: Pub food available
Your next stop is Derby. The city centre is just a 20 minute drive from Elvaston Castle. Park in the RCP carpark on Agard Street, you can pay with cash or a mobile app. It's a 10 minute walk from the carpark to your first stop in the city, Ye Olde Dolphin Inne.
This inn was built over 500 years ago and is the oldest pub in Derby. It's a great place to stop for a pub lunch or just refuel with a refreshing pint in a friendly and cozy traditional pub, but keep your wits about you and an EMF meter close to hand because the pub is said to be home to no less than four resident ghosts.
The pub once had a doctor's surgery built on to it as an annex. Criminals where taken there after they'd been hanged for dissection by a local physician. It's said that the cellars were used to store bodies of criminals.

Photo: © Ashley Dace
Location: View on map
Walk: 2 mins
Additional Time Need: 10 - 20 mins
If you want to extend your tour, walk down to the River Derwent a couple of minutes away, where you'll find the Silk Mill, an old textiles factory spread over five floors.
It once employed 300 adults and children as young as seven who were expected to work torturous hours in poor conditions. The building is credited as being the birthplace of the industrial revolution, as this was the site of England's first real factory, built in the early 1700s. The mill was destroyed by fire in 1826 and again in 1910, only the bell tower survived, a bell tower that was once used to summon the factory's workers to duty.
The tower is said to be haunted by a young boy who died after being kicked down the stairs by one of the factory's overseers. Staff and visitors to the building have reported hearing him crying at the foot of the stairs, when staff have gone to investigate they've found the stairwell empty. The lift in this part of the building is also said to operate by itself, randomly moving between floors.

🖤
Location: View on map
Walk: 10 mins from your last stop
Entry: £3 per person, children under 16 are £1 per child
Opening Times: Every Saturday 11am - 3pm
From your last stop, head back to the carpark on Agard Street. At the end of the carpark you'll find the entrance to Derby Gaol, a working crime and punishment museum which is open to the public on Saturdays between 11am and 3pm.
The historic jail is said to be the most haunted building in Derby, it was built in the 1500s to house local criminals and was replaced by a newer prison in 1756. Having been through many incarnations, it was eventually bought in 1997 by paranormal historian Richard Felix who has worked to restore the gaol to as closely as possible to its original state.
The paranormal activity at the gaol seems to most frequently occur in June and July, and again between October and December and ranges from doors closing by themselves, the sensation of feeling sick, and discomfort in the throat or the sensation of being suffocated. One visitor claims to have seen two dead men hanging from a beam inside the cell.

🖤
Location: View on map (parking location)
Drive: 45 mins
Parking: Free onsite parking
Walk: 10-15 mins from the carpark to the stone circle
Entry: £1 per person
From Derby Gaol jump back in your car and head north to the Peak District. Your next stop is an ancient stone circle that is said to be haunted by a bogart, which is a mischievous spirit that wanders around the area.
There is free parking for around five or six cars at the location, but the remote spot is always very quiet so the limited number of parking spaces isn't a problem. There is a £1 admission fee per person which is payable via an honesty box that you'll find along the 10 to 15 minute walk to the stone circle.
The Temple of the Sun is known as the Stonehenge of the North. It's situated on land where there's been a lot of paranormal activity. It's a place of earth energy that is crisscrossed with ley lines. In the 1970s a group called the Dragon Project did some research here and found that at certain times of the year the stone seemed to be emanating ultrasound also electromagnetic signals.
From here, your final stop, it's about a 40 minute drive back to the M1 or to the M6 making it a fairly easy spot to start your journey home from.
Tags:
paranormalderbyshire