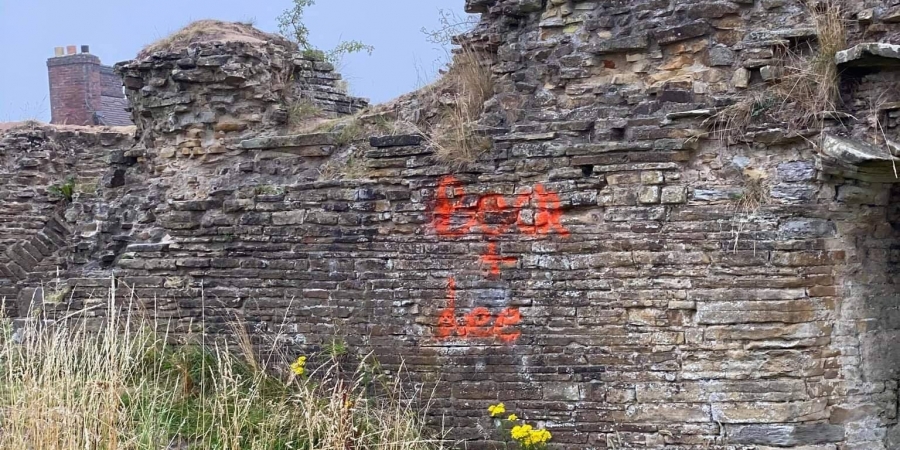 Photo: facebook.com
Mindless graffiti has been sprayed on to one of the oldest parts of the 13th-century Codnor Castle in Deryshire by vandals.
The castle is a favourite location for fans of the paranormal due to its many ghost stories and having hosted several well-known paranormal investigation teams.
Codnor Castle Heritage Trust, who care for the Scheduled Ancient Monument, are appealing for witnesses and asking anyone who knows "Beck and Lee" to speak to Derbyshire Constabulary's Rural Crime Team by dialling 101.
The daubing appeared on one of the oldest parts of the this week and matches other instances of vandalism seen around nearby Ambergate and Ripley, which feature the same names in the same colour paint. So, someone must know who these criminals are.
In order to restore this part of the castle, which has stood on the site overlooking the beautiful Erewash Valley for more than 700 years, volunteers from the Heritage Trust will need to painstakingly scrub the paint from the ancient brickwork using rain water in order to prevent further damage.
The castle is now in ruins after it was nearly completely dismantled in 1643 and the stone and timber was used to build seven farm houses in the local area.
The ruins were designated a Scheduled Ancient Monument and Grade II Listed Building in 1963 and has been on the Building at Risk register since 2016.
The castle was recently named the 11th most haunted place in the country in our annual list of the UK's 100 most haunted places.
The most famous story is that of a soldier of the Knight's Templar who was injured in battle and took refuge in the castle over night. The soldier died during the night, and ever since, his rather aggressive ghost has been seen wearing a dull metal helmet in the castle grounds outside the cottage. He's also seen running through the ruin of the great hall.
The grounds are also said to be haunted by a spirit known as the Grey Lady, the name could be linked to the De Grey family who occupied the castle for centuries. It's said she was a heavily pregnant French woman, and died following an accident while out riding her horse. She has since been seen gliding around the estate and the echoes of a French woman singing have been heard.
If you have any information on this crime or other vandalism in the area, please contact the Rural Crime Team on 101 or report the incident online here.
Tags:
paranormaltopicalcodnor castlederbyshire