Are Scientists Really Using The LHC To Contact A Parallel Universe? 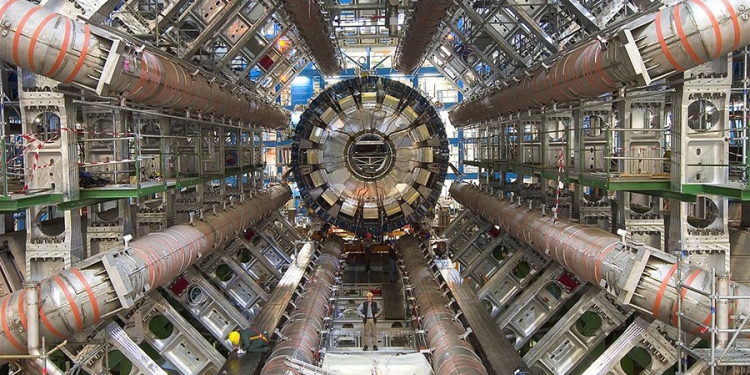 Photo: © Maximilien Brice
A scaremongering story is doing the rounds that claims that scientists working with the Large Hadron Collider are just days away from making contact with a parallel universe, but is there any truth in the story?
The claim has lead to alarm on social media as it's previously been claimed that the high energy particle collider could create a black hole powerful enough to suck the whole planet inside of.
The story is being circulated on a website called 'Science Natures' and should ring alarm bells as even the first line of the article demonstrates poor grammar and makes no sense. It reads "the astoundingly complex LHC 'atom smasher' at the CERN center in Geneva, Switzerland, are fired up to its maximum energy levels ever in an endeavor to identify - or perhaps generate - tiny black holes."
From there on in the article just gets stranger, "if successful a very new universe is going to be exposed." A very new universe? It wouldn't be a "new" universe, let alone a "very new" universe - perhaps they mean a "newly-discovered universe?"
You'll eventually reach the line "next week’s experimentation is reflected to be a game-changer" and by now you should have come to the conclusion that this is of course fake news.
The article is actually a bad rewrite of a 2015 story that appeared on the Express website entitled "Scientists at Large Hadron Collider hope to make contact with PARALLEL UNIVERSE in days."
Even the original article was written off as being sensationalist scaremongering, and was quickly proven to be fake news when scientists didn't actually make contact with a parallel universe in the days following August 15, 2015.
If you read to the bottom of the original story, you'll find that the true nature of the claim is written there and it's not as scary as ripping a portal into a parallel dimension.
Mir Faizal and his team at CERN (the European Center for Nuclear Research) in Switzerland are actually trying to detect whether gravity from out normal three-dimensional view of the universe might leak into "extra dimensions."
Faizal clarifies that when the media incorrectly use terms like "parallel universe" or "parallel dimension" people think of the multiverse. Faizal says, "they think of the many-worlds interpretation of quantum mechanics, where every possibility is actualised. This is not what we mean by parallel universes. What we mean is real universes in extra dimensions."
He added, "we predict that gravity can leak into extra dimensions, and if it does, then miniature black holes can be produced at the LHC."
So don't worry, 2020 probably isn't going to get any worse... or at least won't end with a catastrophic rip in the fabric of spacetime.
Tags:
spacetopicalscience