Could Mediums Actually Be Contacting The Living From Different Time Periods Rather Than The Dead? 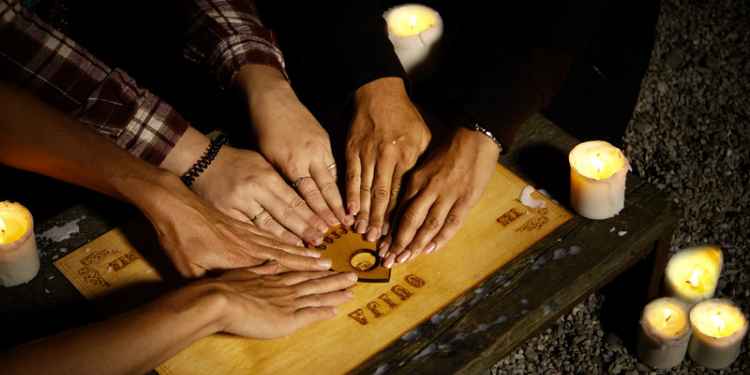 Photo: canstockphoto.co.uk
If a séance can cross the barrier between the world of the living and the world of dead, shouldn't it also be possible to break through to another point in the spacetime continuum and make contact with others holding a séance in the same location at a different point in time?
Those who attempt to make contacts with ghosts and spirits, often do so through the tradition of séance. During a séance it's normal for all participants to join hands. It's said that by linking hands the participants are focussing their energy and allowing the spirits to use it to come forward.
This focussed energy is said to be able to penetrate the barrier between the world of the living and the world of the dead. Those partaking in the séance then attempt to make contact with any spirits that have come forward either via a clairvoyant, a ouija board, or simply by asking the spirits to tap once for "no" and twice for "yes".
But what if the focussed energy created as part of a séance wasn't actually opening up a doorway with the deceased, but was in fact opening a channel of communication with a different point in time, the past or perhaps even the future.
Séances are usually performed in haunted houses, castles, or other locations which are believed to be haunted. This means that throughout time, different groups of ghost hunters, mediums, and paranormal researchers are sat in the exact same location attempting to make contact with spirits.
Well, isn't it possible that those spirits are actually other ghost hunters from another point in time? Their combined psychic energies could be coming through and could be what is causing the planchette on a ouija board to move, the tapping sounds, or the medium to get messages.
It's not that uncommon for a spirit to come through in a séance and when asked what year it is, to answer with the year they died, usually in the past perhaps the 16th or 17th century. If this isn't the spirit of the deceased and is in fact the focussed energy of ghost hunters from the past, then these people in the past have made contact with us here in their future.
So, that means if people in the past are making contact with ghost hunters here in the present, then it could also be possible for today's ghost hunters to make contact with people in the future.
Communication between the dead and the living, or in this case the two points in time doesn't consist of a linear conversation, instead it's the movement of the planchette or tapping. Perhaps this is because it is the subconscious psychic energies being drawn to each other. Those taking part in a séance may not even realise what messages they're throwing out into the past or future.
Of course, this is just a train of thought, a theory. But if I'm right, the next time I find myself on a ghost hunt, I'm going to be asking the spirits for upcoming lottery results rather than the gory details of how they died.
Add A Comment
Tags:
paranormalghosts