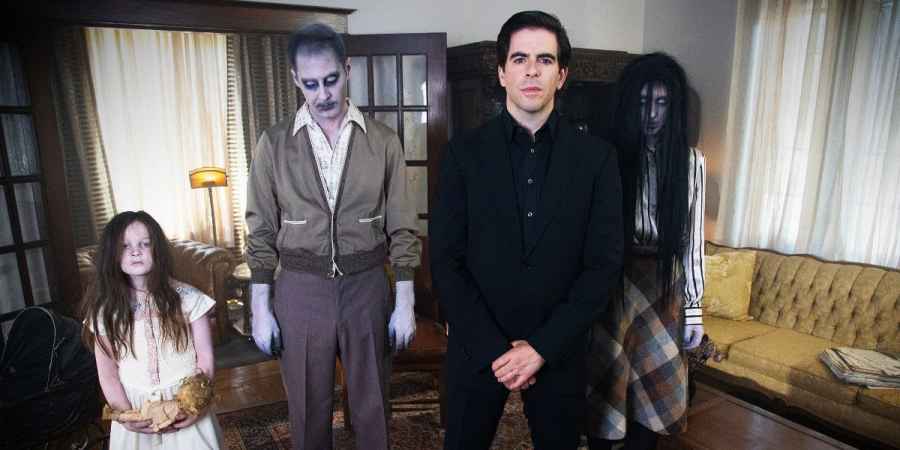 Photo: © T+E
Featuring over 160 hours of must-see programming, including all new seasons of 'Haunted Hospitals', 'Paranormal: Caught On Camera', 'Eli Roth Presents: A Ghost Ruined My Life' and 'Strangest Things'.
To kick off the Halloween season, T+E's highly-anticipated annual TV event, Creep Week will rise from the dead to bring audiences hair-raising thrills and chills from Saturday, October 8 to Sunday, October 16. Now in its sixth year, T+E's Creep Week is set to deliver more ghosts than ever before with over 160 hours of spine-tingling programming, featuring the biggest premieres and themed marathons of those who have been spooked by the unknown.
The fright-fest lineup will include the season two world broadcast premiere of 'Eli Roth Presents: A Ghost Ruined My Life', immersing audiences in modern-day true stories of victims stalked by the supernatural, executive produced by the acclaimed horror director Eli Roth ('Inglourious Basterds', 'Hostel', 'The Last Exorcism') and Cream Productions.
Now in its fourth season, the latest season of T+E's hit original series 'Haunted Hospitals' returns with chilling stories of paranormal activity inside medical institutions, followed by the season five premiere of 'Paranormal: Caught On Camera' and a second installment of 'Strangest Things'.
What makes 'A Ghost Ruined My Life' so terrifying is that these are all documented real-life paranormal encounters. The new season of 'A Ghost Ruined My Life' sees a wide range of people come forward to share their ghost stories for the very first time, and each of them have experienced some form of a supernatural stalker. We try to tell their stories in the scariest way possible, while also respecting that many of them are still traumatized by what happened to them," says Executive Producer, Eli Roth.
"T+E fans know that Halloween is our channel's biggest holiday, which is why we celebrate October with our highly-anticipated Creep Week event, now in its sixth year. We've curated over 160 hours of must-see paranormal programming in our Creep Week schedule, with exclusive premieres and spine-tingling marathons to super-serve our dedicated audience in Canada," says Craig Junner, SVP, Programming and Content Strategy, Global Media. "For those who scare easily, T+E's Creep Week might be too scary for you. It will keep you entertained, but it may also keep you up all night."
From October 8 to 16, T+E's Creep Week will be airing daily paranormal programming marathons, including episodes of 'Scariest Night Of My Life', 'Strange Evidence', 'Paranormal 911' and 'Help! My House Is Haunted'.
To find out more about your favourite ghostly series, exclusive videos, trailers, and more, visit T+E's Creep Week hub. Join the conversation on social media by following T+E's Facebook, Twitter and Instagram pages, and by using the hashtags #CreepWeek #ChannelYourFear #AGhostRuinedMyLife

'Haunted Hospitals'
Season 4 World Broadcast Premiere, October 12
Explore chilling stories of paranormal activity inside medical institutions. In each episode, nurses, aides and support workers give first-hand accounts of ghosts, entities and past occupants coming back from the grave to seek revenge or to warn of impending danger.
'Paranormal: Caught On Camera'
Season 5 Canadian Broadcast Premiere, October 13
Watch as eyewitness' capture amazing, eye-opening and downright scary paranormal videos from around the world while a panel of experts break down the footage and analyze what was captured.
'Eli Roth Presents: A Ghost Ruined My Life'
Season 2 World Broadcast Premiere, October 14
Executive produced by award-winning film director, producer, writer and actor Eli Roth, T+E's original anthology series unveils shocking, modern-day real-life stories of hauntings that have left emotional (and sometimes physical) scars on those unlucky enough to have experienced them. Reminiscent of Roth's vivid cinematic masterpieces, each episode will play out like mini horror films, immersing audiences in the world of those being haunted and hunted by ghosts.
'Strangest Things'
Season 2 Canadian Broadcast Premiere, October 16
Hidden away in museums, laboratories and storage rooms are the most remarkable and mysterious objects on Earth. Using new research and 3D technology we can get under their skin like never before. From the unbelievable, to the ancient and the truly bizarre. Welcome to the world's strangest things.
Tags:
paranormaltelevisiontopicalhalloweenhalloween 2022tande