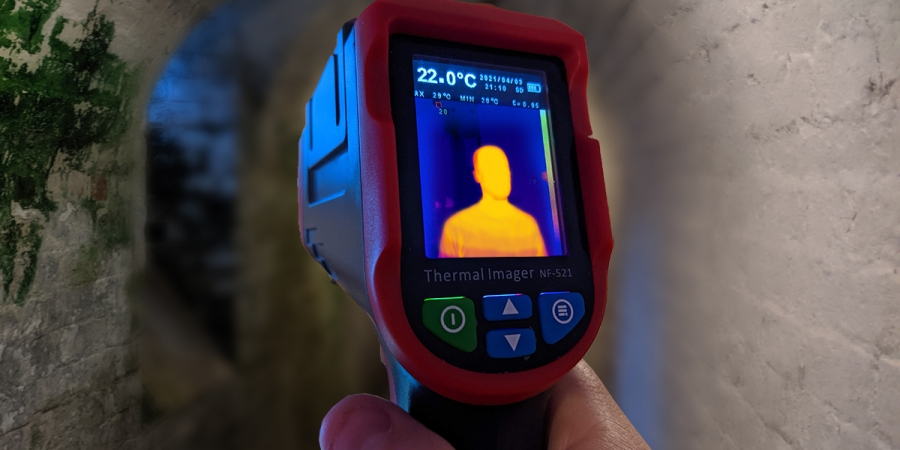 Thermal imaging cameras are relatively expensive when you consider the leading brands, such as Flir. As the most trusted manufacturer of thermal cameras, their handheld devices sell for around £500 and up. There are cheaper options available as an add on to Apple or Android phones, which sell for around £300.
This can be out of many ghost hunters price range, perhaps leading them to consider some unbranded and cheaper alternatives, the type available on eBay, but are these £135 thermal imagers any good, or do you get what you pay for?
A thermal imager is a special type of camera which is able to see and build a visual representation of the heat emitted by objects in it field of view. They are commonly used by ghost hunters as a way of seeing objects that are warmer and colder than their environment which might not be visible to the human eye or in the dark.
Of course this concept is slightly questionable fundamentally because if an object is invisible to the human eye then light would pass through it. This makes it unlikely that the object would be able to emit heat which radiates from objects in the form of infrared radiation that can be found on the electromagnetic spectrum alongside visible light.
However, where thermal imaging cameras might be useful on a ghost hunt is where poltergeist activity is reported. You may be able to use the camera to see if an object that has been thrown or broken has been flash heated or cooled, either through supernatural means, or by some natural process or due to contact with a warm human.
But can a cheap thermal camera function as this sort of investigative tool on a ghost hunt? To put the cheaper models to the test, I bought one. According to the eBay listing I was getting a 'thermal imaging camera LCD thermometer'.
The first thing to note is that this £135 camera only saves still images to its SD memory card, it's not possible to capture video at all. So if you're hoping to get thermal video evidence during an investigation, this camera is not for you.
The next thing I noticed was the terrible image quality. Admittedly the listing does say "it is an ideal choice for electricians and maintenance technicians and can be used to quickly find the problem area."
It might be fine for these purposes, but on a ghost hunt this cheap thermal imager isn't fit for purpose. Take a look at the images below, both were captured using the thermal imager. As you can see the visible light photo on the left is pretty poor quality. In fact the quality is so poor that I can't work out where I took this photo or who is in it. The thermal image on the right is equally unclear. 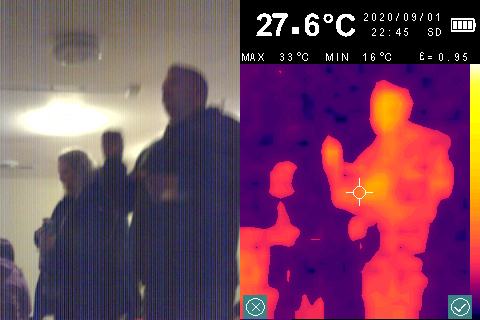 The biggest problem here is simply the resolution. We all know how important the megapixel count is on a camera. This thermal imager has a rating of less than half a megapixel with a resolution of just 320x240 pixels - despite the eBay listing stating that the device is "high resolution." This thermal imager has a very poor resolution, far from high res.
You can switch between regular photo mode and thermal mode in order to capture images for comparison, but the terrible image quality is just as much a problem for the thermal images, it's impossible to tell what you are looking at in the photo or see it in any detail.
So, in conclusion these cheaper thermal imaging cameras aren't worth the space in your kit bag and will not help further your investigations.
My advice would be to wait until you can afford to buy a more expensive model as you clearly get what you pay for with these products, but better still save your money and avoid thermal imaging cameras all together.
As previously stated, they can be a valid part of a paranormal investigation and teams have captured some interesting evidence using them, but the lack of any scientific basis explaining how a ghost can become visible by its heat signature highlights the fact that in most investigations these cameras aren't being used correctly.
If you have a specific experiment in mind where you need to be able to quickly see the difference in temperatures between surfaces at a distance then a Flir or similar thermal imaging camera is a great option. Perhaps you want to test whether hot water pipes in a wall could be causing knocking sounds, or if an object becoming rapidly chilled is causing it to break or move.
For experiments like these where you don't really need a crystal clear thermal image, a cheap eBay thermal imager might suffice, after all you only need an idea of the relative temperatures and the blurry blobs captured with this device will tell you that.
But for £135, don't expect to capture a chilling detailed face of a ghostly apparition drifting through a room at a significant temperature difference to its surroundings, because with this camera you'd be hard pushed to tell if you're looking at a living human's head, let alone a ghost's.
Tags:
photographyscienceparanormalghost hunting