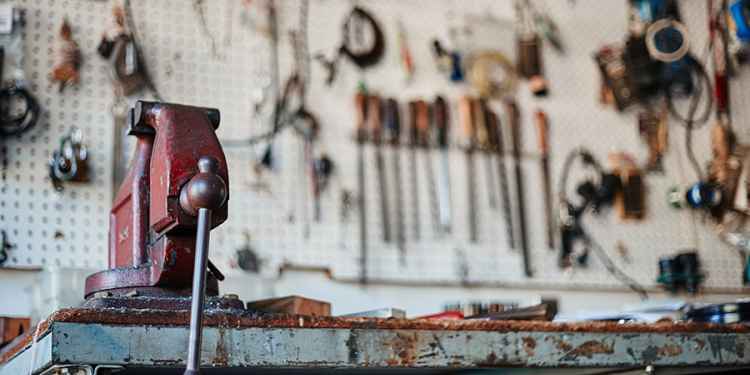 Photo: pixabay.com
When you think of famous poltergeist cases, the one that springs to mind is probably the Enfield case, but around the same time another just as credible haunting was unfolding in the Welsh capital that few know about today.
The Cardiff poltergeist case revolved around the workshop of a lawnmower repairs and servicing company called Mower Services. Astonishingly it lasted for 14 years and despite being investigated by the Society for Psychical Research, its story is relatively unknown.
Their business comprised of a workshop and a small yard set back from Crwys Road in the Cathays area of Cardiff, their adjoining garden accessories shop opened out on to the street. The shop was originally part of a row of terraced houses built in 1882, with the workshop behind accessible via Cryws Mews.
John and Pat Matthews took over the shop in 1979 and almost straight away unexplainable activity started to occur. The paranormal activity was eventually witnessed by both John and Pat, as well as their colleagues, customers and several independent witnesses including, police officers, insurance inspectors, academics and a local priest.
The first occurrence happened one quiet Saturday afternoon when John was watching a rugby game on a television in a shed in the yard with Pat's brother Fred Cook who worked with him. They were distracted from the game by what sounded like stones landing on the roof. John went outside to investigate but found no one there.
Fred was initially unconvinced and felt sure that John was mistaken and that it must have been local kids throwing stones, "I thought people throwing stones it's gotta be. It can't be anything else."
This was just the start of the paranormal activity at Mower Services. Stones being thrown both inside and outside the workshop became common and the staff got so used to it that they nicknamed the mischievous poltergeist Pete.
Speaking to the press, John said, "it all started with the poltergeist throwing things about. He was just throwing everything around in the shop. We looked at each other and couldn't believe it. It was the most fascinating couple of hours I have ever spent. He's thrown things while people have been in the shop and while reps have been here."
The paranormal activity included tools, bolts and small engine parts being thrown or found on the workshop floor. Dust was dropped down the back of workers' shirts, smashed dishes were magically put back together, a lawnmower started up on its own and text was typed on a computer in the office above the shop. On one occasion blue flames emerged from a brass World War II shell case that was on display as a souvenir in the workshop.
Small engine parts called carburettor floats often moved around of their own accord. John wanted to test this one evening and as he was leaving placed a float on a flat surface and challenged the spirit to move it. As he was locking up he felt a prick in his palm and opened his hand to find it was the sharp end of a float that had materialised in his hand. The one he had placed in the workshop had indeed vanished.
After seven years in the property it was renovated, which allegedly made the hauntings worse. 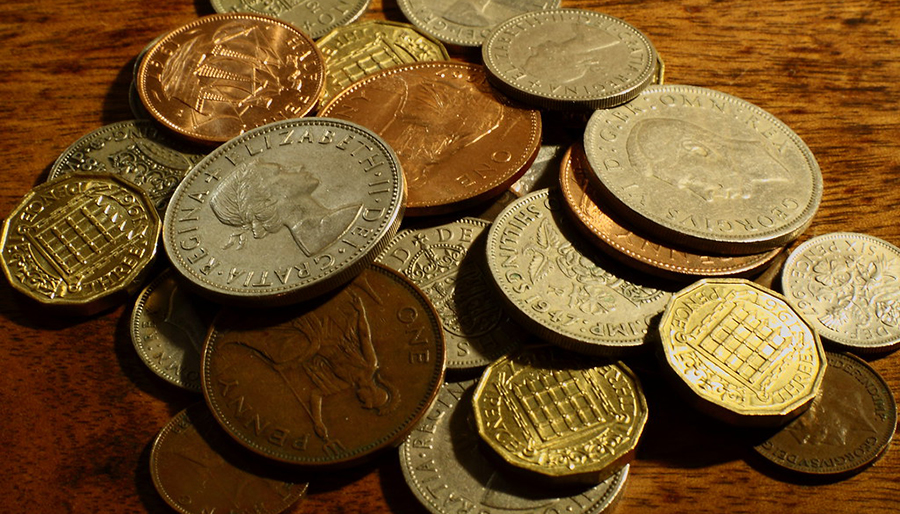 Photo: © Adrian Clark
One commonly reoccurring phenomenon was the spontaneous appearance of money. Pete had already been blamed for making objects like pens, keys and bolts appear from thin air, so the family jokingly asked if he could give them some money. The next morning three old pennies of unknown origin dating back to 1912 and crumpled up £5 notes were found in the retail shop and workshop.
Fred said, "the boys who worked there used to say to him, 'give me a penny' and he'd make a penny appear out of thin air and fall at their feet. Then he started giving me pounds and even notes, fivers and tenners stuck to my car in the rain."
The activity seemed to mostly emanate from one corner of the workshop. Speaking about the haunting to a local paper, John said, "it seems to stem from one corner. One day I was moving things about in that particular corner and because I was disturbing him he threw two big marbles which just missed me."
A bunch of keys once went missing and after a full search they miraculously reappeared when they slid across the floor towards their owner.
John also claimed that sometimes he could throw stones into the corner and they came back to him. He found this out by accident when he threw a stone into the corner out of frustration, only to find it land back at his feet. John found he was able to repeat this and that it was usually a different stone that came back to him, not the one he had thrown - he says this eliminated the possibility that it was just bouncing back.
At one point there was a break-in at the workshop and the police were called. While the officers were on sight, they are said to have witnessed Pete's mischievous activity for themselves. As a result of the burglary Gareth Lucas, a representative from the insurance company, visited to inspect the building. He also reported strange goings on after hearing odd noises and seeing a stone being thrown across the floor.
One witness worked in a shop two doors up the street in the early 90s. He'd heard about the local stories of the ghost that haunted the mower shop but was skeptical. So, while walking past one day he threw a stone which he picked up off the ground in their yard. To his surprise, the stone didn't hit the metal door he threw it at. He expected to hear the metallic clang when it made contact, but it didn't. Instead it came back and fell at his feet, without making any sound apart from when it fell to the ground.
John once wondered if the activity could just be the result of a staff member pranking him. So one evening after hours he conducted a test. They went through into the shop and locked the doors, they then placed their hands on the counter so that they knew their hands were all accounted for. Even in this state the sound of stones flying around continued.
John and Pat worried that the poltergeist activity might scare and eventually drive away their customers, so in 1989 John contacted the Society for Psychical Research in London. They sent one of their investigators, David Fontana, a British parapsychologist, author and professor of psychology at Cardiff University. He ended up spending over two years investigating the case, from June 1989 until 1992.
As soon as Fontana arrived he started experiencing the activity. When he first walked in he saw John and a visiting sales rep sat on low boxes with their hands on their knees. Fontana noted that although their hands were visible and they didn't move, a stone was thrown across the workshop.
Fontana was also able to replicate the odd phenomenon of stones returning when thrown into a specific corner of the workshop. He thought this demonstrated that the poltergeist had intent and the rudimentary intelligence necessary to accomplish this intent. 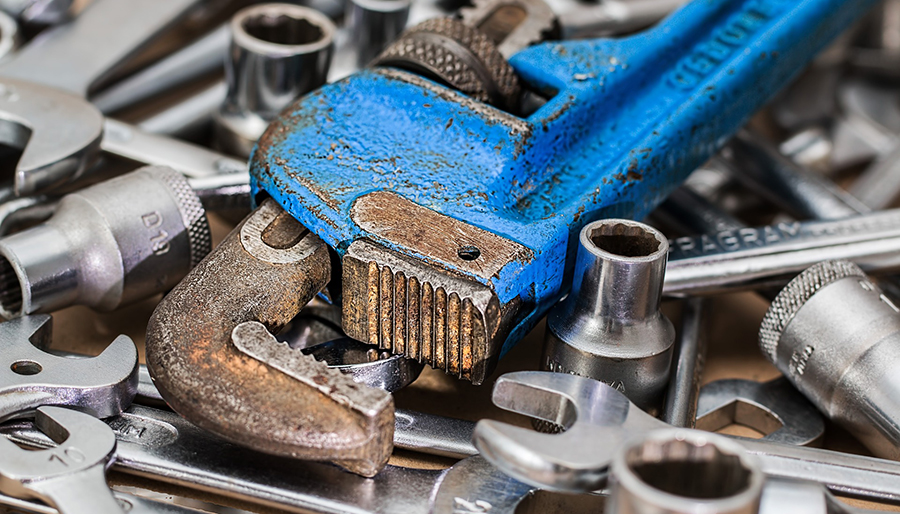 Photo: pixabay.com
The haunting stepped up a gear when Fred saw the entity that was haunting the workshop for the first time. Fred looked up and saw the apparition of a 1940s schoolboy up on a shelf. Fred thought he looked about 12-years-old and described him as wearing "a cap, dark short-trousers, a jacket and big black boots".
Fred said, "I'd never been frightened until then. I looked up and there he was sitting on a shelf. He was a young boy, wearing short trousers and a peaked cap but his head, hands and legs were just outlines, there was nothing there. After that I saw him about five or six times".
Professor Fontana's research revealed that there were rumours that a young boy was killed on a road nearby and it could be his ghost haunting the mower store. The rumour was later confirmed when the boy's older sister came forward after reading about the case in the local paper.
In 1993 Mower Services moved from Cryws Road to a new, bigger premises in Splott. The shop was converted into a restaurant and the workshop has since been demolished. There has been no reports of any activity since the company moved out.
However, it wasn't the last that was heard from Pete. Fred claims that after it left Cryws Road it followed him to his house in Llandaff and moved in with him and his wife Gerry. Fred eventually accepted Pete as one of the family.
What makes this case so interesting is that unlike other poltergeist cases, no children were involved, which is normally true of poltergeist cases. The activity didn't seem to be attached to one person. It happened when John was on his own, when Fred was on his own, and even when Fontana was there alone.
The victims of the haunting seemed to have no motive to fake the activity as their main concern was that it would drive away customers. For much of the haunting Fred asked not to be named in the press or opted to be referred to as Paul.
Professor Fontana was also impressed by how intelligent and interactive the poltergeist seemed to be. He noted with interest that although he witnessed objects being thrown and appearing on several occasions, he never saw their flight through the air, only the moment the objects landed. He thought this added to the legitimacy of the case.
All this makes the Cardiff poltergeist case one of the most interesting and best corroborated in British history. The case did get some press attention throughout, but since it came to an end, unlike other prominent poltergeist cases, the stories have been forgotten.

The Cardiff Poltergeist On 'Strange But True'