What Is The Paranormal Phone Experiment? 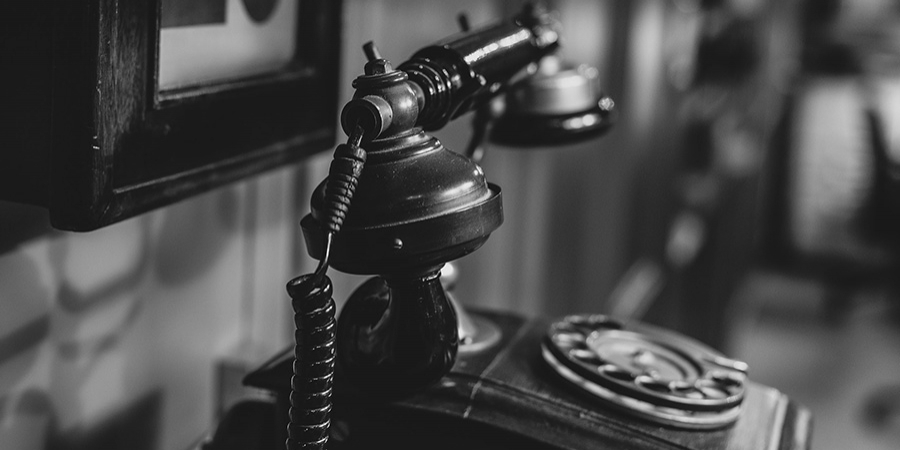 Photo: pixabay.com
The Phone Experiment is a method of spirit communication used by paranormal investigators. It comes under the umbrella of instrumental transcommunication (ITC) and uses the same principles as EVP.
EVP is electronic voice phenomenon, the practice of capturing unexplained voices on electronic devices. This is normally achieved using a digital voice recorder, the investigator asks questions aloud and then listens back to the recording in the hopes of hearing a spirit's voice respond.
Another method of EVP recording is known as 'real-time EVP' and involves using a device like a Spirit Box, a radio or similar electronic device to listen to EVPs as they occur, without the need to play back a recording to hear them.
While recording EVPs are the most commonly practiced method today, traditionally EVPs were much more commonly heard in real time through radio receiving devices and even telephones.
One of the early pioneers in EVP, Sarah Estep, once recorded a telephone call from a fellow EVP researcher, Konstantin Raudive, who had died 20 years previously. It's said that Raudive made similar calls to two other researchers in the field.

How To Conduct The Phone Experiment

The idea of hearing the voices of the dead over a telephone has been adapted by current day paranormal investigators using modern technology.
During a paranormal investigation a mobile phone is used to call the phone of another investigator. It is then put into speakerphone mode and placed in an isolated part of the location being investigated.
The investigators then go to another room with the second phone and call out to the spirits, asking questions and encouraging them to answer while listening for responses through the receiving phone.
Sometimes one investigator remains in the room with the first phone and calls out in the same fashion while the other investigators listen in from the other room.

How Does It Work?

The exact science of how this process might work is unknown, but it's easier to imagine how it could have worked in the days of Sarah Estep when phone lines carried analogue signals that were susceptible to interference and cross-lines were a common issue. It's conceivable that an intelligent spirit could use its energy to imprint its thoughts on a phone call.
Today all telecoms, including landline calls, are digitally encoded which suggests that a spirit would need a degree in computer science to manipulate audio. Since the advent of digital telecoms, interference and cross-lines are a thing of the past.
However, since it seems that spirits are able to communicate using other digital devices, such as handheld audio recorders, there must be a way that they can with modern phones too. Presumably the spirit is able to imprint its voice using the analogue component of the device - its microphone. Microphones work using electromagnetic induction created when a diaphragm is vibrated by sound waves. Ghosts are said to be intrinsically linked with electromagnetism, so the theory might fit.
It shouldn't be forgotten that when you make a call on your phone, the signal is sent to a near by mobile phone tower, bounced around your mobile phone provider's network infrastructure, passed over to the receiving phone's provider, sent to a cell tower and then received by the second phone. So, if you are monitoring audio from a phone in the next room, that signal is actually travelling a hell of a long way before you hear it.
So why not cutout the middle man? A cheap pair of walkie talkies placed in different rooms would give you exactly the same result. One walkie talkie transmits audio, while the walkie talkie in the room you are in receives that signal. A direct line of communication.
Walkie talkies are a little more prone to external interference, but because they are locked to one frequency and have limited power, distant transmissions wouldn't carry far enough to interfere in most cases.
Another possible reason why this experiment might work well with either a phone or a walkie talkie is down to the fact that some investigators believe that a source of electromagnetism fuels paranormal activity.
It's not uncommon to see investigators using a device called an EM pump during an investigation. The idea behind these gadgets are literally to pump energy out into the environment around it in the hopes that spirits can draw on that energy and use it to manifest or communicate.
Electromagnetic energy can be pumped into your surroundings using just about anything. Mobile phones or a walkie talkies are major sources of EM, so just by using these devices to transmit in a haunted location, you might be giving any spirits present the energy they need to communicate.
Some two-way radios do use digital encryption, which again would be difficult for a spirit to interact with, but cheaper walkie talkies transmit using an analogue signal. So, in the same way that spirits are said to be able to manipulate the AM and FM radio frequencies in order to communicate using a Spirit Box, they may be able to manipulate the radio transmission of the walkie talkie in order to form words and phrases.
You could also experiment with transmitting trigger sounds through the walkie talkies. This would mean that not only does the trigger sound play aloud in the room, but it would also permeate the entire room and beyond in the form of electromagnetic waves. Trigger sounds could be anything from the sound of a battle when investigating a former battlefield, or the sound of prison guards jangling their keys in a former jail. These triggers are another way to encourage spirits to respond.
Tags:
paranormalghost huntingevp