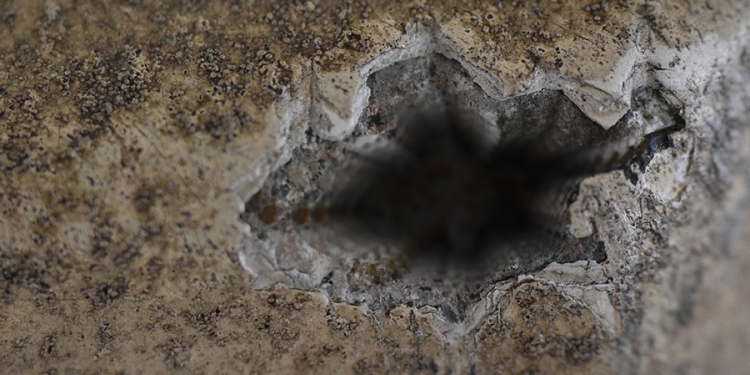 A Welsh man has made a series of bizarre recordings of what he claims to be screams and voices coming from beneath his house, he's now spreading awareness by posting flyers about the sounds through people's doors.
Alan Tait and his wife Christine from Ammanford, have captured hundreds of hours of recordings, which appear to contain sounds coming from beneath their house. The sounds include women and children screaming as if in pain, men shouting, sexual sounds and dogs barking.
It all started last summer when they heard strange noises coming from the empty house next door to their's. They went outside to investigate and heard what they thought sounded like a pump, which seemed to be spewing foul smelling liquid into the drain.
The curious couple lifted the drain cover and tried to find the source of the sound, but were unsuccessful. So, they decided to try to capture the sounds using an audio recorded they bought on eBay. After trying various spots in an around their house, they came to the conclusion that the sounds were coming from underneath their very own basement.
Eventually Alan found the loudest spot in the basement and dug a 1.5 meter hole to lower a microphone inside of and over the following months captured hundreds of hours of audio. As well as the sound of voices, Alan says he's caught the sound of a printing press running, a motorbike, a car horn honking and what sounds like a police siren, even though no other traffic noises can be heard.
They believe that the sounds could be coming from a tunnel or an old mine, there is apparently also a sealed wartime bunker close to his home, which he thinks could be connected.
Alan, who goes by the name Van Fogey online, has been uploading some of the sounds to his YouTube channel, including the clip below which he claims is the sound of someone saying "oh no". Quite why the audio recording is of such poor quality is unclear.
After the police ignored the couple's complaint about the unexplained noises, the couple have now travelled to homes in nearby Gloucestershire to post pamphlets to try to raise public awareness and have even started a petition addressed to the Metropolitan Police Commissioner calling for the police to investigate.
Alan and Christine have posted hundreds of the strange leaflets, which asked readers to help "these people that are trapped underground against their will."

The Woman and Children that can be heard crying and screaming underneath our basement floor in Ammanford, South Wales need your help.

We have 106 supporters on change.org who have listened to the recordings that we made, and have then signed our petition calling for the matter to be properly investigated.
Some of our supporters comments:
"I have listened to the recordings, now I can not sleep"
"I see no reason why this matter has not been investigated, unless the Police are in on it"
I have listened to the screaming, they are real"
We need to help these people that are trapped underground against their will, this is why my Wife and I are travelling all over the UK delivering these leaflets.
Warning: If you are under 18 years old or are likely to be distressed by the recordings please do not listen to them.
The recordings are real and some of them are harrowing.
We have made the screams into a series of short recordings, around 20 seconds each.
According to Gloucestershire Live, the couple have been travelling the country in their van and have also put up posters in a bid to find someone who would take their claims seriously.

Can AI Finally Expose The Truth Behind The Notorious Roswell Crash?

Does New Trail Cam Photo Evidence Back Up Existence Of Big Cats in Britain?