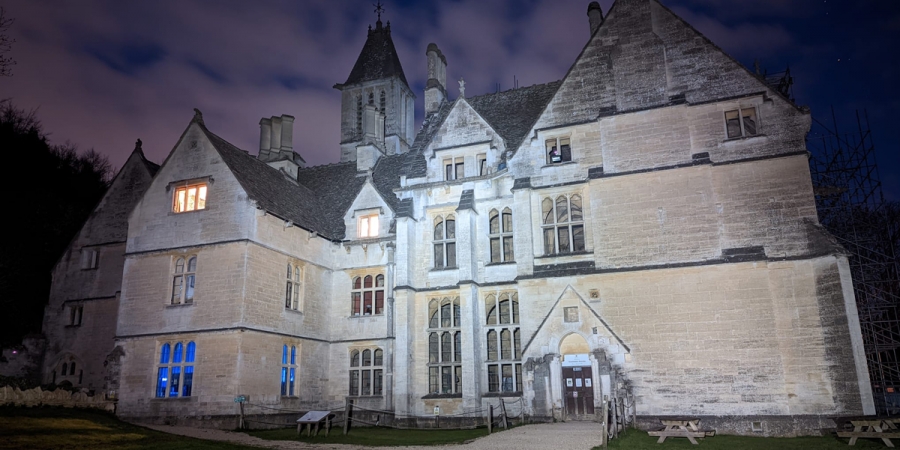 🖤
We've all heard the stories of phantom monks, grey ladies and full-bodied apparitions, but sightings of these elusive visions are rare. This lead me to question whether people still see ghosts... until I saw one myself.
A couple of years ago I wrote an article entitled, 'Do People Still Actually See Ghosts?' In it I questioned why more people aren't reporting seeing apparitions of the long dead, despite the fact ghost hunting events are growing in popularity, exposing more and more people to haunted locations and the possibility of encountering something that goes bump in the night.
Since writing about this seeming disconnect between the number of reports of apparitions and the increasing number of ghost hunts, I've been forced to re-evaluate after seeing something weird for myself while on a ghost hunt at Woodchester Mansion.
The mansion sits within a secluded valley deep in the Gloucestershire countryside. This grand Victorian mansion complete with menacing gargoyles and Gothic architecture, has the look of a classic haunted house about it.
My belief-shaking moment happened while I was being shown around the unfinished house by local paranormal expert, Paul Hobday, who will be familiar to viewers of the Really's show, 'Ghost Chasers'. Paul works closely with the Woodchester Mansion Trust and knows all about the property's history and ghostly goings-on.
Paul told us that the mansion had been the dream of Liverpudlian, William Leigh and that it was constructed on the site of a much earlier Georgian country house called Spring Park. Work on the mansion started in the 1850s, but progress was slow and the project was eventually abandoned.
At one point on the tour I was stood with the rest of the guests in a corridor at the back of the house as Paul told us a little about this part of the building. The lights had been turned off in the corridor, but Paul was holding a torch, which let out a decent amount of light, so it was easy enough to see our surroundings.
From where I was stood I could see along an adjoining corridor that lead to the chapel. This was before the ghost hunt had actually begun, so I wasn't expecting to witness anything, but I did. Suddenly a human-sized, grey mass appeared about 1.5 meters into the opening of the corridor opposite me.
The object had appeared right in front of me, directly in my field of view, it lasted for a second or two and then it vanished. With such a fleeting glimpse it's hard to recall and describe exactly what I saw, but it was stationary and it appeared to be floating off of the ground.
The shape was tall, grey in colour and appeared to be draped in fabric. I'm reluctant to call it a figure, because it lacked the characteristics of a human body, such as shoulders, limbs, head and facial features, but it appeared to be about the same height and width as a human. The best way I can describe it would be as someone holding up a bed sheet. In fact, it wasn't too far removed from that classic comic book image of a ghost wearing a sheet.
Below is my best attempt at recreating what I saw using a photograph of the actual location where it occurred. 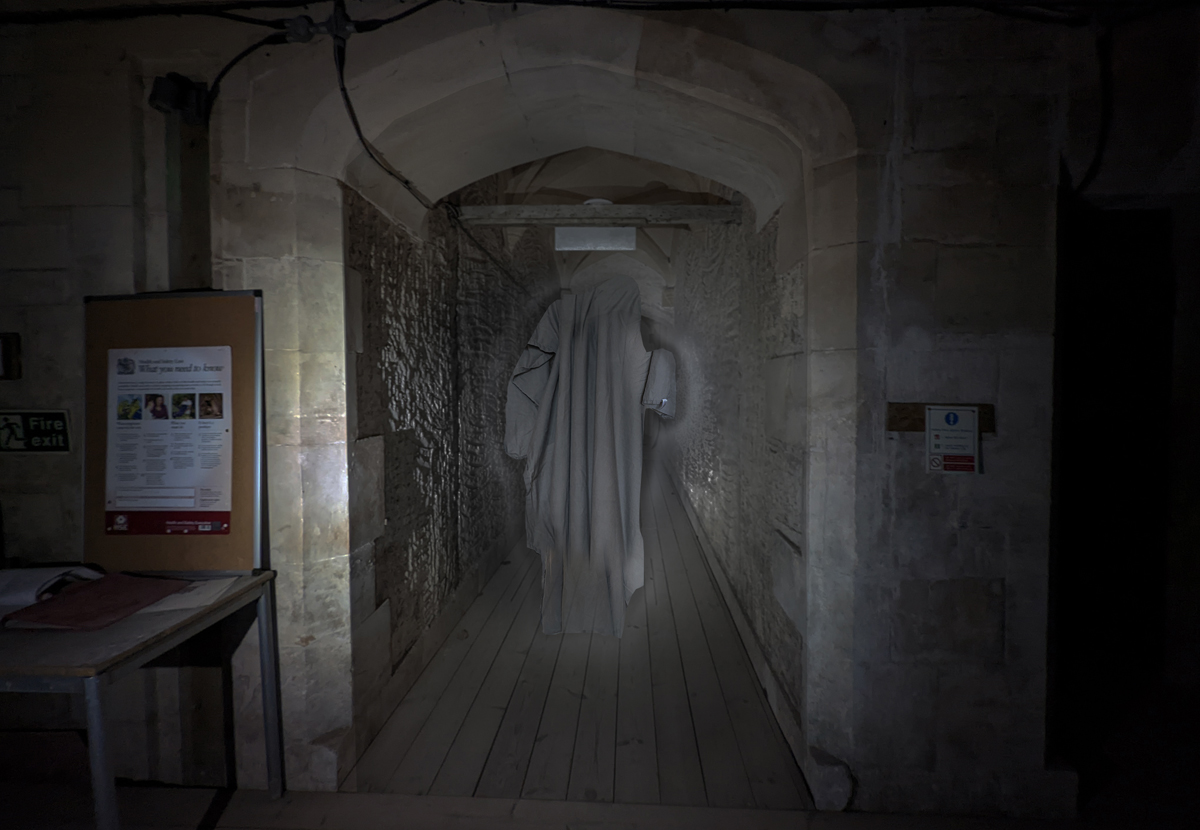 As a skeptic, I was a little taken aback by this. I didn't think it was possible to experience something like this in the way I did. I don't believe in ghosts and normally when people report a sighting like this it's something they've seen in the shadows or out of the corner of their eye - this wasn't.
After writing down my description and sketching my sighting, Paul told me that other people had seen things in that exact part of the building. It's been described as a dark or grey figure, some even describe it as a hooded monk.
I want to be clear. I 100% did not ever use the word "monk" to describe what I saw, but in hindsight I can certainly understand why someone might describe exactly what I saw as a monk, especially someone with a better imagination than me. It would be easy to leap to the conclusion that it was a human figure wearing a hooded robe, especially if they only saw it for a couple of seconds too.
This experience has helped me to tackle my question of whether people still actually see ghosts from another perspective. I wouldn't go as far as to say that what I saw was the spirit of a dead person, but I saw something and what I saw seem to match similar experiences reported by others.
From this new standpoint it's quite easy to see how a report like mine might perpetuate a myth of a full apparition, and it all comes down to the human tendency to misremember, embellish and exaggerate stories.
Most ghost stories are passed on by word of mouth, or retold in books and on websites. During this retelling we often inadvertently corrupt them by imprinting our own beliefs and opinions, or emphasising the interesting parts while leaving out the boring bits - this can dramatically change how the story is perceived by the person it's told to.
It would be very easy for some who believe that a grey monk haunts Woodchester Mansion to retell my story, and since they believe I saw a monk, that's how they will tell it, thus perpetuating the myth of a monk which will be perceived to be a full-bodied, identifiable apparition of a monk by those who hear this retelling of the story. The reality might be that no one has ever seen a grey monk at Woodchester Mansion, but we might have all seen that same grey shape which could at a stretch be described as being sort of like a hooded figure.
If anyone has seen a full-bodied apparition then it would be Danny Moss, who leads The Haunted Hunts paranormal team, so I asked him for his opinion on apparitions. Danny thinks that there's a rational explanation for at least 90% of reports of the paranormal. He said that seeing a ghost is all down to our imagination and preconceptions of the haunted location, "people put two and two together and automatically assume they've seen a ghost."
Knowing this to be true, I did all I could to try to debunk my experience. I spent some time back in that same area where I tried to sniff out non-paranormal explanations. Some parts of the building had ceiling-mounted electronic sensors with a green light that flashed every few seconds. So I thought perhaps there might have been some kind of mist drifting across the corridor that was temporarily illuminated by the flashing light, but on inspection, there were no sensors in that particular corridor.
Danny added, "to witness a real full-bodied apparition is an extremely rare thing and I believe that it's luck, you have to be in the right place at the right time and that may only occur on a particular date and at a particular time, which makes it even less likely to see one."
So was I lucky? Was I in the right place at the right time and managed to experience real paranormal activity? It's very hard to say. If I had to commit to an answer, I would say no, but it was definitely unexplained and very unusual, which as a skeptic is quite high praise for a possible paranormal happening. The incident didn't give me any reason to conclude that what I had seen was the spirit of a dead person, but since it could so easily be described as a shrouded figure or a monk, it does help me to better understand what others have seen, no matter what the cause of it is.
Danny said, "I think a lot of the shadow people and dark masses people see nowadays can be caused by sleep deprivation. Investigators are often up until the early hours of the morning and it's common that people see things out of the corner of their eye."
Could it have been my eyes playing tricks on me? Yes, of course. This is always a possibility, especially when it's only witnessed by one person and it's not caught on camera. However, I've not seen anything like it before or since, and it wasn't merely something I saw out of the corner of my eye, it appeared directly in the centre of my field of vision.
However you describe it, it's definitely the closest I've been to seeing what could be called a ghost. It's possible that I was mistaken or that there was a rational explanation, but to me it's unexplainable and it's comparable to sightings that other people have reported. Rightly or wrongly, those people are often confident enough to call what they experienced a ghost, so I think it's reasonable to classify my experience the same way. Therefore, I do feel that I saw a ghost.
Tags:
gloucestershireparanormalwoodchester mansionghosts