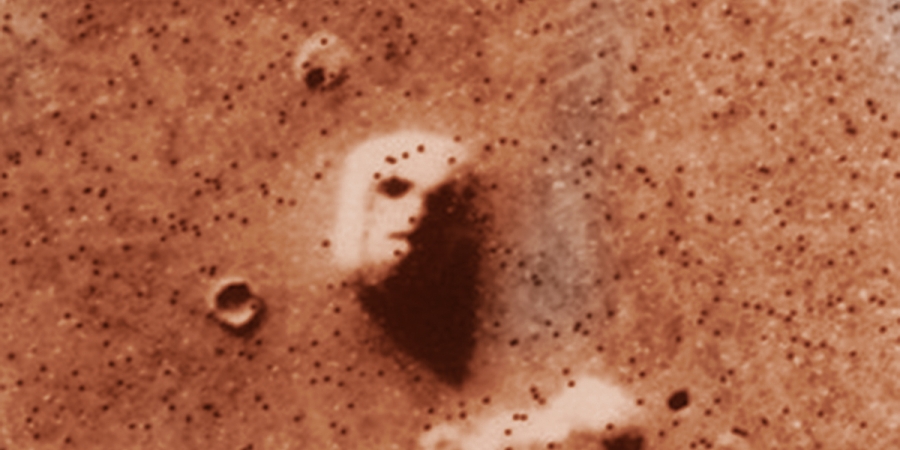 Photo: © Viking 1, NASA
As a kid growing up in the 90s with a fascination in all things weird, I remember the face on Mars being touted as definitive proof that intelligent alien life exists in the universe.
Despite some ufologists being convinced the face was proof of alien life, the iconic formation on Mars has been forgotten by conspiracy theorists. This is the story of how a rock got mistaken for proof of aliens and how that theory was quickly forgotten.
The original image dates back to a NASA mission well before the 90s, but by this time it was ingrained in UFO culture and deemed to be proof of an ancient alien civilisation on Mars.
Some believed the face and the surrounding pyramid-like structures to be part of a ruined city. The face was likened by some to an Egyptian Pharaoh, suggesting possible contact between an ancient Martian civilisation and one of the oldest human civilisations on Earth.
These theories might have been spurred on by a 1993 episode of the cult sci-fi series, 'The X-Files'. The episode entitled, 'Space', was inspired by the face on the red planet and revolved around NASA astronauts and mission control crew being haunted by visions of the disembodied face.
The famous face is easily one of the most recognisable landmarks on Mars after it was originally photographed during a flyover by NASA's Viking 1 spacecraft in 1977. The image was captured in a part of the planet known as the Cydonia region in a spot between the Mars' highly-cratered terrain of the south and the smoother plains in the north.
Although the vast majority of scientists weren't convinced the face was artificially created by an extraterrestrial intelligence, the face did drum up a lot of public interest, so NASA jumped on the first chance they had to photograph the formation again. This came in 1998 when Mars Global Surveyor swept across the planet. The photos were clearer the original 1970s snaps, but some people were still not convinced due to the fact it was winter on this part of the planet when the photos were taken and conspiracy theorist felt that cloud cover might have been hiding the alien markings and finer clues of an alien civilisation.
Of course, we're not actually looking at an extraterrestrial carving, the apparent face is nothing more than an illusion caused by the play of light on a rocky outcrop, this is exaggerated further by the relatively low quality of the camera aboard the spacecraft.
This is an example of the psychological phenomenon of pareidolia, our subconscious tendency to turn random patterns into identifiable shapes, such as the image of a man on the surface of the moon, shapes in the clouds, and even the image of Jesus on a piece of toast or the Shroud of Turin. 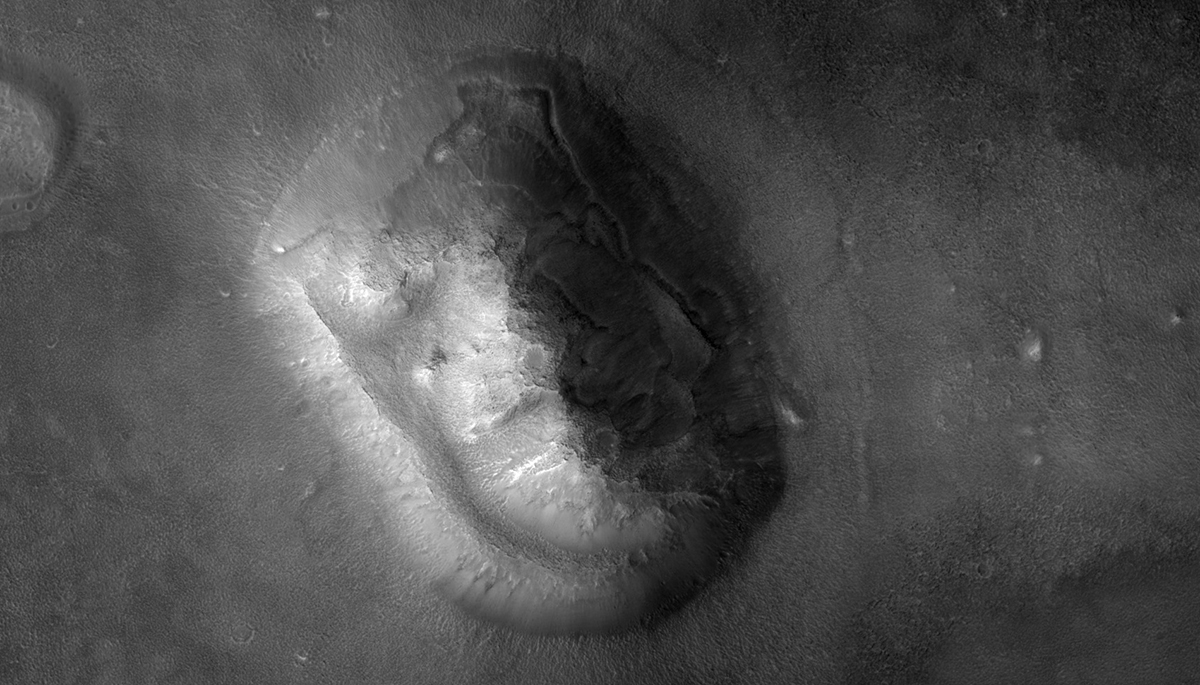 Photo: © NASA / JPL
It was finally confirmed that the face was nothing more than pareidolia in 2001 when the Mars Global Surveyor made another pass over the face. This time it was a clear summer's day and they were able to capture much clearer images and user laser-based 3D imaging technology to measure the height of the formation with a vertical precision of 20-30cm.
The measurements produced 3D elevation maps that weren't subject to the influence of light and shadow. They revealed that there is nothing special or different about the face, there are no signs that it has been artificially created and its structure doesn't differ dramatically from the other rocky hills around it. Without the light and shadow on the face, there are no facial features.
The face is one of many rocky mesas in the Cydonia region, it's just the others don't resemble human faces. Many of these flat-topped hills with steep sides have been photographed by NASA while circling over the area and they are all very similar.
Despite its notoriety, the Cydonia face isn't the only face on Mars. There's also a crater which resembles a smiley and another formation which in the right light looks like Kermit the Frog.
Tags:
spacemarsufos