There were over 700 species of dinosaur that roamed the Earth for millions of years, so why don't we ever see the huge ghost of a dinosaur walking along the street? 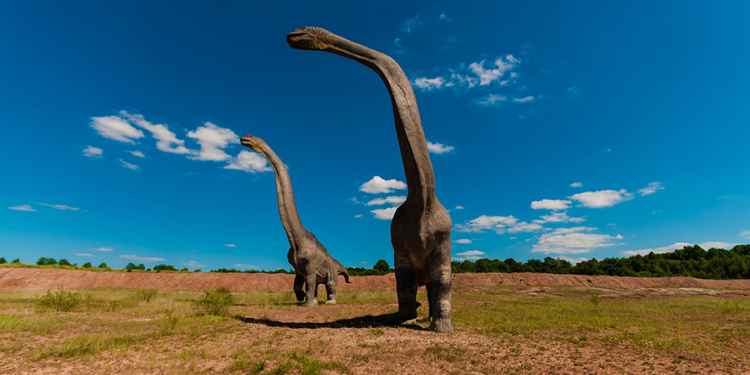 Photo: pixabay.com
When you picture a ghost, you probably think of a shadowy human figure, perhaps a soldier or a woman in white from the Victorian era. You might even conjure up the image of a ghostly horseman riding his trusty steed, or perhaps a phantom black dog.
There are plenty of examples of people seeing the ghosts of their pets. There's a castle in Wales which is said to be haunted by the laughing ghost of a murdered pet monkey, and even the Tower Of London is haunted by the ghost of a bear.
So, if animals can come back and haunt the living, why don't we see the ghost of dinosaurs roaming around the streets? After all they did live on Earth for over 150 million years, making human's mere 200,000 years look like a blink in their eye.
The major factor that would rule out the possibility of seeing dinosaur ghosts is the fact that ground level has changed a lot since dino times, hence their fossils generally being found deep underground.
There are countless stories of ghosts which appear to be walking in mid-air or with their lower legs below floor level due to changes in the building they haunt or the ground level. We know ghosts tend to haunt on their former plain of existence, which is why ghosts are reported to pass through long-bricked up doorways or carry out what was once their daily routine in long-gone surroundings.
So if the ghosts of dinosaurs were still wandering around, they'd be doing it underground. The tallest dinosaur was 19 meters high. The Jurassic era layer of rock is about 150 metres deep. So you're unlikely to see the ghost of a brachiosaurus' head popping above ground level.
Of course there are places around the world where the Jurassic layer is exposed, like the majority of the Dorset and Isle of Wight coastlines. So, why don't we see dino ghosts here?
It could be because they weren't ever emotionally or spiritually developed enough to be able to return as a spirit. It seems logical that not all animals can come back as ghosts, like rats for example. It's said that you are never more than 6-feet away from a rat and there are more than 70 million of them in the UK alone, yet we're not overrun by the ghosts of billions of rats.
Probably the most common animal ghost is that of a horse, there's even a cliff in Texas which was the site of a stampede which resulted in hundreds of horses falling to their death. Today it's said you can still hear the sound of horses running towards their fate.
A 2016 study found that horses are more emotive than a lot of animals, researchers found that they react differently to seeing photographs of happy and angry human facial expressions. When viewing angry faces, horses look more with their left eye which is associated with perceiving negative stimuli. Their heart rate also increases more quickly and they show more stress-related behaviours.
It's possible that dinosaurs lived at a time long before complex emotions existed in animals, especially given that no animals have human-like emotions even today.
Another explanation could just be that over the millions of years since they walked the Earth, dinosaurs' energy has simply faded away or doesn't show itself in a way we can perceive in the modern world.
Many researchers of the paranormal believe in a theory called "stone tape", which states that psychic energy or strong emotions can be "recorded" by the surrounding environment. It's most commonly believed that it is the stone, wood and even the ground at the location that can store these energies.
When the atmospheric conditions are similar to the time that the event occurred the energy can be released by the material and the event is replayed. Perhaps today's atmospheric conditions are just so far removed from those of pre-historic Earth that stone tape replays can't manifest from that era.
Stone tape leads us on to another possibility - that we're overlooking our own brilliance. Perhaps we're looking at this the wrong way and it's not the emotions or psychic energy of animals that's being recorded but our very own overwhelming emotional response to animals.
In the case of the long-dead soldiers riding apparitions of their trusty steeds across former battlefields, is it so hard to believe that it might be human psychic energy that is binding the vision of a horse to the location? After all, the ghost soldier is able to conjure up a supernatural reconstruction of his own clothing, clothes clearly are not sentient or alive in any sense.
If someone had witnessed the mass horse death on that Texan cliff top, could it not be that person's powerful psychic energy generated by the feelings of horror and distress as they helplessly watched the event that has latched on to the surroundings? Otherwise we'd have to accept that each of those horses are independent ghosts.
If it really is the case that it's human emotions being recorded which are responsible for all animal hauntings, then there couldn't possibly be any dinosaur ghosts as there were no humans around to witness them.
One final thought. If you don't think the ghosts of dinosaurs exist, then stop and think for a moment about the elusive Loch Ness Monster. It's often spotted but never captured or studied. Could this be the ghost of a long-extinct aquatic dinosaur?
Tags:
paranormalanimalsghosts